Pulses import likely to fall to record low this year

India consumes around 24-25 million tonnes of pulses, but sowing trends show this year production is expected to be lower compared to last year. 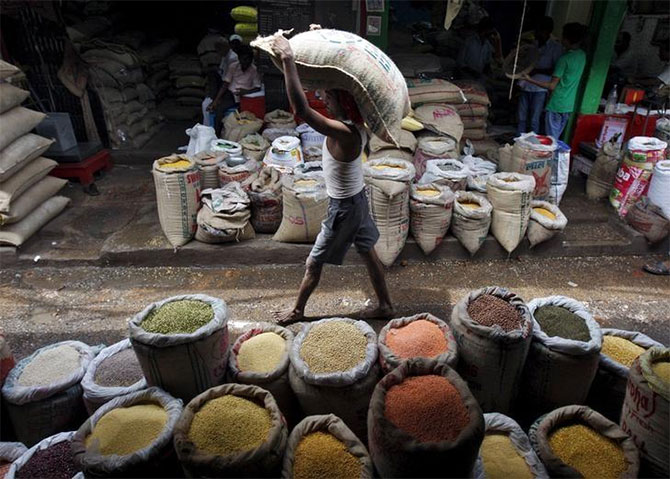 India’s pulses imports this year are expected to fall to one million tonnes from 6.6 million tonnes in 2016-17, helping farmers who have been trading their produce below state-fixed minimum support prices (MSP).

India consumes around 24-25 million tonnes of pulses, but sowing trends show this year production is expected to be lower compared to last year.

With most varieties trading below their MSP, crop production could fall further.

Sowing of kharif pulses this season so far is only 7.94 lakh hectare compared to 2.79million hectare last year by this time.

The government will release 3.9 million tonnes of pulses in its stocks under the price support scheme (PSS).

In the second week of June, the government decided to release 2 lakh tones arhar (toor or tur) from its buffer stock and issued import quota for 2lakh tonnes in early June.

With import restrictions in place, domestic availability of pulses (for consumption- other than stock with government) is estimated much lower to have fallen sharply from 30.6 million tonnes in 17-18 to around 24.6 million tons in 18-19.

The Directorate General of Foreign Trade (DGFT) on Tuesday notified import of another 200,000 tonnes of toor, taking total imports to 400,000 tonnes this year.

As much as 1.75 lakh tons import of toor will be imported from Mozambique under government to government agreement this year.

However, “total import of pulses in 19-20 is expected to be around 1 million tonnes only (based on policy situation at present) which is expected to arrest supply glut as the government has managed the situation well,” said Bimal Kothari, MD, Pancham International Ltd., a leading importer and trader in pulses.

Tur dal prices have been trading above Rs 100 since last few months and despite measures taken by government last months, prices have remained stagnant, though not rising much.

Traders in Mumbai say that other varieties of pulses are still not fetching MSP, though farmers are busy sowing new kharif crop.

Once overall situation balances, pulses farmers could start getting assured MSP from market.

Some hangover of stock with government for buffer and price stabilisation will remain on the market which will not let prices rise sharply at least for varieties that are trading below MSP.

Meanwhile, following continuous decline in import from India, overseas growers have cut their planting of tur.

This year, therefore, the availability of tur got squeezed in the global market.

Now, with India evincing interest in import of additional quantity, tur prices have shot up sharply in domestic and international markets.

“The current minimum support price (MSP) of ‘whole tur’ at Rs 58.50 per kg would translate into tur dal price in the wholesale market around Rs 85 a kg and in retail market at Rs 110-120 a kg.

“Thus, the prevailing tur dal price in the retail market at Rs 110-120 a kg is realistic one,” said Pradeep Jindal, partner, Jindal Overseas, one of India’s largest pulses’ traders.