A magnitude 8.1 earthquake struck off the coast of New Zealand. LSU banned a former coach from contacting female students. And what could states ditching mask mandates mean for the rest of the United States?

Several powerful earthquakes hit near the coast of New Zealand Thursday night and Friday morning, prompting tsunami warnings for New Zealand and tsunami watches for Hawai’i. The most powerful was a magnitude 8.1 quake (that’s quite large) that hit some 600 miles off of New Zealand on Friday morning, the U.S. Geological Survey said. There were no immediate reports of serious damage or casualties. Following the 8.1 quake, civil defense authorities in New Zealand said a damaging tsunami was possible. Hawaii was under a tsunami watch. “A tsunami may have been generated by this earthquake that could be destructive on coastal areas even far from the epicenter,” the Pacific Tsunami Warning Center said. I texted my dad in Hawai’i to warn him about the tsunami, and he replied: “Put my floaties on.”

Netflix break, anyone? The Senate voted Thursday afternoon to begin debate on President Joe Biden’s $1.9 trillion COVID-19 bill. However, Sen. Ron Johnson forced the Senate to read the entire bill (literally, hundreds of pages) aloud on the Senate floor. The entire process could take at least 10 hours. Johnson said his tactic was about “educating” the American public on what was in the $1.9 trillion package, which he has derided as full of provisions unrelated to COVID-19 relief. Once the reading of the hundreds of pages of the legislation is complete, the Senate will start 20 hours of debate on the bill, aiming to pass it by the end of the week. Democrats aim to move the bill through Congress by March 14, when a federal boost to unemployment benefits expires.

Meanwhile, on Capitol Hill, U.S. Capitol Police were bracing for a “possible plot to breach the Capitol by an unidentified militia group.” National Guard troops formed a visible presence at the U.S. Capitol complex on Thursday with hundreds of troops unloading from a dozen large tour buses while carting long rifles, helmets and backpacks.

What everyone’s talking about

An internal investigation at Louisiana State University found that former football coach Les Miles was caught texting female students on a burner cellphone and making sexual advances toward them. The investigation, done by an outside law firm on behalf of LSU in 2013, did not find that Miles had sexual relationships with any of the women, but it found his behavior inappropriate. As a result of the investigation’s findings, the university prohibited Miles from having one-to-one contact with student employees and required him to use his LSU-issued cellphone for communication with employees. The allegations against Miles – now head coach at the University of Kansas – were first made public after USA TODAY sued for the records in January.

Alabama, Mississippi, Texas, Montana and Iowa are ditching mask mandates and COVID-19 restrictions to the dismay of public health experts. What could that mean for the rest of the United States? Like so much with the pandemic, the path ahead is unclear. Nationally, the number of COVID-19 cases has steadily declined over the months. But the notion of easing precautions “just feels like so the wrong time,” said Eric Rubin, an infectious diseases specialist, and puts the rest of the country at risk for continued spread.

While some local mayors are telling residents to ignore the words of their state governors, families are now tasked with making their own choices of whether to wear masks or go to restaurants. The mixed messaging has become another unfortunate reality of COVID-19’s impact. “The part that doesn’t make any sense at all is the masking part,” Rubin said. “There’s no economic reason to not wear masks ever.”

Prince Philip has had a successful heart procedure at a London hospital, Buckingham Palace said Thursday. The palace says the 99-year-old Duke of Edinburgh, the husband of Queen Elizabeth II, “underwent a successful procedure for a preexisting heart condition.” The elderly royal, who has been hospitalized since Feb. 16, is expected to remain at St Bartholomew’s Hospital for treatment and rest for a few days. The longest-serving royal consort in British history has had heart issues in the past. In 2011, he was rushed to a hospital by helicopter after suffering chest pains and was treated for a blocked coronary artery. 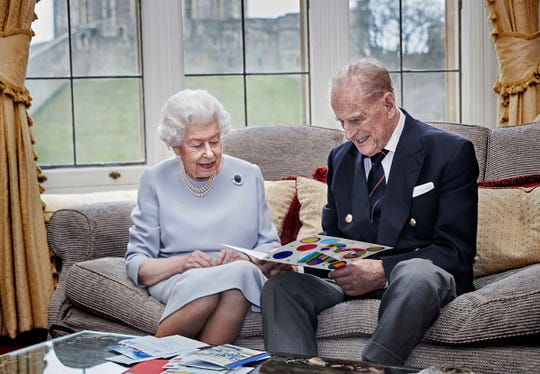 Queen Elizabeth II and Prince Philip, Duke of Edinburgh, look at homemade wedding anniversary cards given to them by their great-grandchildren at Windsor Castle ahead of their 73rd anniversary, Nov. 17, 2020. (Photo: Handout, Chris Jackson/Getty Images)

A break from the news (but not streaming)

This is a compilation of stories from across the USA TODAY Network. Want this news roundup in your inbox every night? Sign up for The Short List newsletter here.