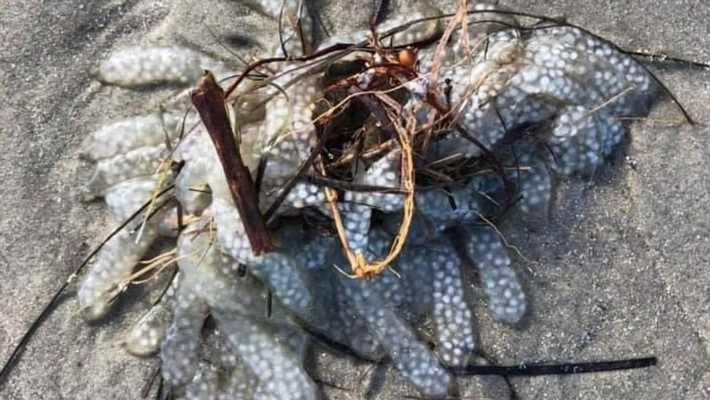 A face hugger from another “Alien” film? “Invasion of the Body Snatchers”? Or a few pairs of gloves that something laid eggs in? Those were just some of the ideas people had when the Cape Lookout National Seashore shared a photo of a “mysterious mass” found on the North Carolina coast.

The National Park Service said the mass was found months ago but asked people on Tuesday if anyone knew what was pictured.

“So far it has escaped being identified — although it might be something like the egg sacks of a squid (but we aren’t sure). Anyone want to take a stab at identifying it for us?,” the Facebook post read.

Other than the popular suggestion that it was some sort of alien, some people guessed that it was squid egg sacs. And the Cape Lookout National Seashore confirmed that suspicion to USA TODAY.

As for what type of squid it is though, there is no definitive answer. But one squid expert may have an idea.

In a conversation with the Oregon Coast Aquarium, Louis Zeidberg, an expert from Cal State Monterey Bay, said a similar thing was popping up in Oregon with the California market squid.

While it is a Pacific species, Zeidberg pointed out that “there’s also an Atlantic species, which is slightly bigger and was separated from this species when Panama closed up.”

Park officials also confirmed the sac is related to the California market squid.

If it is an Atlantic species and is anything like its California relative, females deposit their eggs on sandy habitats and build large mounds of egg cases.

“Because they’re produced in shallow water where there’s waves and surge, they probably have this protective coating to keep them from getting smushed. The capsules also potentially contain bacteria that mom lays that provides a sort of anti-predator, anti-microbial infection defense,” Zeidberg said.

Zeidberg added that he is unsure if it is safe to put the sacs in the ocean if people see them at the beach, but “it definitely can’t hurt” to do so. Depending on the weather, the eggs can take days or months to hatch, according to the National Oceanic and Atmospheric Administration.