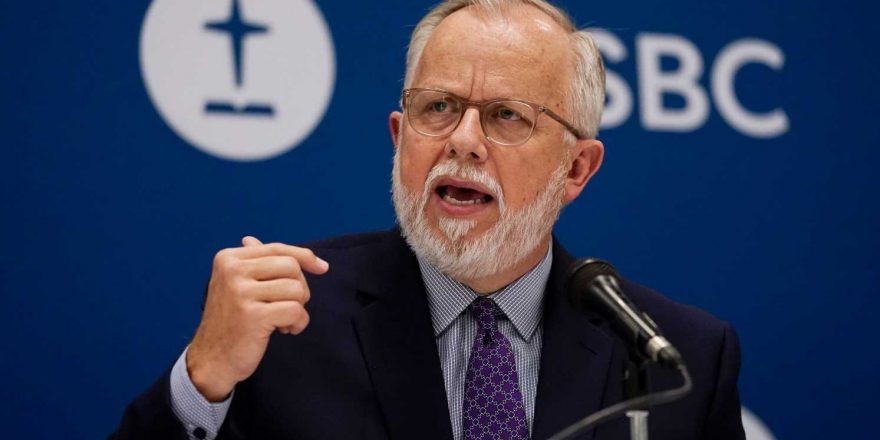 NASHVILLE — The election of the new Southern Baptist Convention president underlined the rifts in the conservative evangelical network of churches.

Look at the margin of victory. Alabama pastor Ed Litton, lauded for his racial reconciliation work, defeated Mike Stone, the Georgia pastor backed by the faction trying to push the convention further to the theological right.

It shows that while the convention’s big annual gathering in Nashville is over, its divisions probably are not. A wish for unity persists, but the question remains: Can it exist?

Litton hopes to give it a shot.

“We’re a family and at times it seems like we’re incredibly dysfunctional as a family, but we love each other,” he said during a Tuesday news conference following his win. “Sometimes families argue in a way that the neighbors get to see it.”

The public spotlight is shining brightly on Southern Baptist infighting. Tensions reached a fever pitch in the runup to their annual meeting.

Thousands of the denomination’s more than 14 million members showed up in Nashville to address a slate of contentious issues, including whether critical race theory is incompatible with Southern Baptist beliefs, how to handle the sexual abuse crisis in the church and if the convention needs a conservative course correction.

In the face of all the tension and division, Litton wants to build metaphorical bridges instead of walls within the Nashville-based convention. He said he will need wisdom from God to achieve it.

The more than 47,000 autonomous churches that make up the largest Protestant denomination choose to be a part of the convention and work together to spread their Christian beliefs to more people, he said.

“It means that we have to work out and iron out some of our differences,” said Litton, who leads Redemption Church in Saraland, Alabama. “What we can’t do is go down a narrow trail that says you have to see everything exactly like I see it or you can’t be a part of the fellowship. We’ll get real small real quick if we do that.”

Where Southern Baptists go from here

This is something Southern Baptists wrestled with at the annual meeting, which was viewed as a watershed moment for the future direction of the convention.

Some, like the Conservative Baptist Network, say the convention has shifted toward theological liberalism. The Southern Baptist group launched in 2020 and has prioritized pushing the convention to condemn critical race theory and has criticized how some women lead in the church.

But others disagree. They argue those calling for a conservative course correction are advocating for a fundamentalism when the convention’s statement of faith lays out the core beliefs Southern Baptists are to unite around while making space for disagreement on issues not specifically addressed in it.

Southern Baptists among the latter group saw Litton as the only nominee for convention president that could stop an exodus of minority congregations from the convention. Several Black pastors publicly exited after the six white seminary presidents declared critical race theory incompatible with Southern Baptist beliefs.

This disagreement played out in the election of the convention’s new president, a position with influence and appointment powers capable of shaping the denomination’s future, although it takes more than one election to shift directions.

“At a time when conservative Southern Baptist African American leaders are questioning their connection to the convention, Ed has uniquely shown his commitment to racial reconciliation,” Louisiana pastor Fred Luter Jr. said in his speech nominating Litton.

Luter, a former convention president and the first Black leader to serve in the role, called Litton the uniter the convention needs now.

‘Everybody’s Welcome’: Georgia church, kicked out of the SBC for allowing gay members, wants to make sure ‘everybody’s welcome’

‘The tongue is a fire’: Southern Baptist church fractures over secrets and spiritual abuse

Ed Stetzer, the executive director of the Wheaton College Billy Graham Center, thinks Litton’s win is a good sign for the the future diversity of the convention.

“I think it’s a statement that Southern Baptists didn’t believe the false reporting that CRT (critical race theory) had infiltrated their agencies, but instead chose to listen to their African American pastors and leaders, who told them, ‘We’re on the same team. We share the same values. We love the same Bible.'” Stetzer said.

The convention has seen a 14-year drop in membership, but Litton noted much of its growth in the past 30 years has happened in non-white churches, Litton said.

“We want you here. We love you here. We can’t reach every man, woman, boy, girl in this nation without you,” Litton said.

Ed Litton, pastor at Redemption Church in Saraland, Alabama was elected Southern Baptist Convention president during the 2021 meeting in Nashville.

Jules Woodson, a sexual abuse survivor, said she’s grateful Litton won the election, but  was disconcerted by the apparent deep divide in the convention.

“It’s encouraging to have a president who is willing to look at the serious issues such as sexual abuse and coverup within the SBC,” Woodson said. “These are systemic issues and these things are not something one man can fix in the nation’s largest denomination. It’s going to take a lot more than one person.”

Woodson and other survivors have advocated for a database of abusers and for more transparency on the executive committee, which acts on behalf of the convention when it is not in session.

The sexual abuse crisis repeatedly came up during the annual meeting. Among the actions taken, Southern Baptists decided any person who has committed sexual abuse “is permanently disqualified from holding the office of pastor.”

“If the SBC wants to take this seriously, there needs to be true repentance, and true repentance requires a lot of things to include restitution for the horrible things that they’ve allowed to go on,” Woodson said.

The future of the Conservative Baptist Network

After the close of the first day of the meeting, Louisiana pastor and network spokesperson Brad Jurkovich shared on Twitter his appreciation for Stone and supporters of their cause.

“Valiant effort today. Thank you to the thousands who are standing with us,” he said in the Tuesday social media post.

Far fewer ballots were cast in Brand’s race than in the vote for president. His margin of victory was just more than 6 percentage points or 327 of the 5,403 total ballots.

“It does say the SBC had a chance to decide and the SBC messengers have spoken,” Brand said in a Wednesday interview with The Tennessean.

He is honored and excited to serve and said his goal is to “work with the entire leadership team and just continue moving the SBC forward on a biblical basis.” But he is not concerned about deep divisions within the convention.

“I don’t know that I would even term some of it ‘deep divisions.’ I think there are deep convictions that somebody on the other side may look at and say ‘deep division,’ but I don’t view it that way,” said Brand, who also serves as a vice president at Mid-America Baptist Theological Seminary near Memphis. “I think it’s passionate discussion among family members.”

In the year ahead, Brand plans to remain a part of the network and wants to see those associated with it to continue to stay engaged as Southern Baptists and help move the convention forward.

One of his fellow steering council members, Rod Martin, who also serves on the convention’s executive committee, said during a Tuesday morning network breakfast that they are not giving up their cause.

Brian Kaylor, a former Southern Baptist who still observes and writes about the convention, said he thinks the denomination will continue to face a strong Conservative Baptist Network, especially given the close elections.

“It shows they didn’t end the controversy, they didn’t solve anything,” Kaylor said. “While Litton’s presidency, his election is heralded as a bit of a stop on some of the organizing, the push of the convention further to the right, that group is still there and mobilizing for the future. I think we’re going to be treading the same water for the next couple of years.”

More than anything, the resolution passed alluding to critical race theory — which never explicitly named the theory — will likely energize the more conservative side of the convention, Kaylor said.

“You could read it and if you were opposed to CRT you could say it opposes CRT and the other side could say I agree with this resolution but there are still things critical race theory helps us with,” Kaylor said. “It can be read in both ways and I think the anti-critical race theory people see that.”

Fact Check: Story that Pope Francis was arrested is fabricated

It will become clearer in the days ahead how exactly the actions taken in Nashville affect the people in the pews of Southern Baptist churches, said Randy Davis, the executive director of the Tennessee Baptist Mission Board.

He described Southern Baptist churches in Tennessee as “very conservative” congregations that stand on the inerrancy of scripture and have a heart for their mission of spreading the gospel.

“They will move ahead no matter where they were on this vote for the president,” Davis said. “Some people are very, very disappointed in the election. Some people are elated. I think we press on with the work we’ve got to do as a network of churches.”

Although the convention is divided as evidenced by the presidential vote, Davis said he found the order and decency with which this year’s annual meeting unfolded  remarkable.

“There has not been bloodshed on the carpet of the Music City Center. Quite the opposite,” Davis said of the massive convention hall in downtown Nashville where Southern Baptists gathered. “There has been a lot of sweet fellowship. Good fellowship.”

Rhonda Turner, a messenger from Bradfordville First Baptist at Tallahassee, Florida, said she heard a consistent message of unity from speakers in Nashville, and she’s hopeful the convention is headed toward greater unity.

“But it’s one thing to say it, it’s another thing to do it,” Turner said.