Home » Business » 'Nailed It' celebrates bad baking at its best. 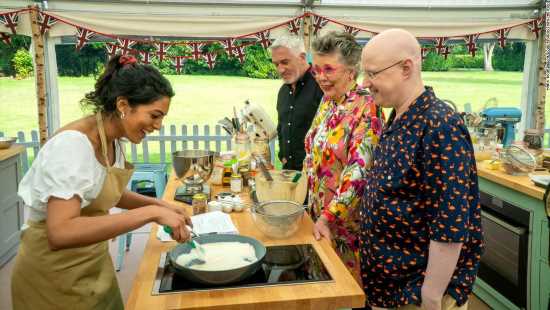 'Nailed It' celebrates bad baking at its best.

TV OT is a weekly look at what CNN’s entertainment team is watching since too much television has us all working overtime.

(CNN)As I set up the refreshments table at the “Law & Order: SVU” Emotional Support Group, enjoy this week’s TV OT.

Just what I kneaded

At my darkest point during the lockdown portion of the pandemic, I was awake until past 3 a.m. on most days watching old episodes of “The Great British Bake Off,” wondering if I’d wake up my husband if I snuck into the kitchen and started baking a cake. (No, Netflix, I’m not calling it “The Great British Baking Show.” You can’t make me.)

I’d typically start my binge sometime after midnight and go until I’d all but guaranteed I’d be dreaming about baking the perfect pastéis de nata instead of having Covid-related nightmares. Aside from the temptation of having the occasional 2 a.m cookie, this was anxiety relief that came with no downsides. A tented haven. A blissful, baked break from the horror show that was reality.

Even when “The Great British Bake-Off,” which begins a new season this week, did its first season amid Covid, it felt like coming home. There were a few nods to the happenings outside the tent, but otherwise, it was a warm blanket of familiarity, fun and flour. 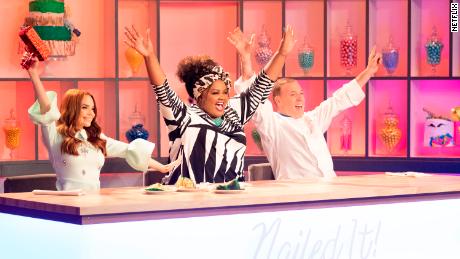 I’d anecdotally heard from other people getting similar feelings from shows like “Nailed It!,” “Cupcake Wars” and “Bake Squad.” (Having previewed a few episodes of Netflix’s upcoming “Baking Impossible,” I anticipate this engineering/baking hybrid series to find a way into the queues of those who frequent both the Food Network and Discovery Channel.)
My best hypothesis is that the Xanax-like effect many of us get from these shows comes from the fact that while the bakers sometimes have things to prove, the shows themselves do not.
The stakes are not life and death. You either get to eat the result or not. And even the failures are quite literally coated in sugar. Temper your eggs but check your tempers at the door; even if you have a soggy bottom, we will all live to bake another day.
And the successes? They’re more than sweet. They’re euphoric. What is more satisfying to watch than a person putting hours of work into something — like, say, a gravity defying cake, as in the first episode of the new season of “Bake Off” — and seeing a beautiful result? (Go Jürgen!) Passion that yields perfection feeds my overachiever soul.
So thank you, baking shows, for being a delicious piece of peace. Frankly, no genre does it batter.

Raising the curtain for Broadway 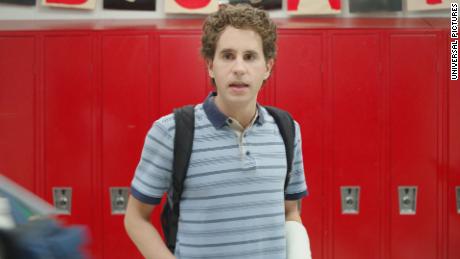 From batter to Broadway, CNN’s Brian Lowry hits on all the stage that’s fit to screen and stream
“In accepting an Emmy for ‘Hamilton’ on Sunday (was it really only Sunday?), co-star Renee Elise Goldsberry celebrated the return of Broadway, as well as the way television helped keep the lights flickering during a pandemic period when ‘we were separate and alone.’
‘This award represents the synergy between the medium of television and theater, what a gift we can be to each other, what a gift you gave to us last year, when we were dark and dispersed, TV created the platform to come together to put on a show,’ Goldsberry said.
That synergy, however, is looking a bit more complicated amid a spate of musicals for TV, streaming and theaters, reflecting a really mixed bag of creative achievements, and no one-size-fits-all answers.
CBS will continue the celebration of the stage with a live special Sunday, ‘The Tony Awards Present: Broadway’s Back!,’ after the presentation of the awards on sibling streamer Paramount+. It happens to come on the same weekend that another adaptation of a Tony winner, ‘Dear Evan Hansen,’ hits theaters, weathering the kind of tepid reviews that might warrant tuning out social media.
‘Evan,’ notably, comes a few weeks after a runner-up in its Tony-winning year, ‘Come From Away,’ made its debut on Apple TV+ in spectacular fashion, and a week before ‘Diana: The Musical’ brings the people’s princess to Netflix. Throw in ‘Springsteen on Broadway’ and ‘David Byrne’s American Utopia,’ and you can make a pretty good case for just setting up cameras and letting the talent do their stuff.
Still, if you look at those productions and ‘Hamilton’ and say filming stage presentations is the way to go, well, ‘In the Heights’ received mostly (well-deserved) rapturous reviews earlier this summer, despite tanking at the box office; and Steven Spielberg’s remake of ‘West Side Story’ is due out later this year.
There is, frankly, a lot to be said for filming presentations, which avoids some of the pitfalls that ‘Evan Hansen’ exhibits. At the same time, ‘In the Heights’ was able to mount buoyant song-and-dance numbers on a scale that obviously wouldn’t be possible within that format.
The bottom line is it’s never been a better time to get to experience theatrical productions from home, with the disclaimer being that nothing quite approximates, to paraphrase ‘Hamilton,’ being there, in person, in the room where it happens.

Getting ‘Lost’ east of ‘La Brea’ 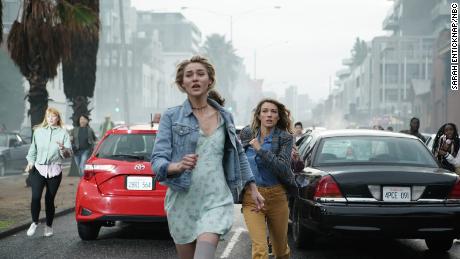 New fall TV continues to trickle in, and Lowry’s got a take on whether you should fall into this new NBC offering:
“‘Maybe we’re just in an episode of “Lost,”‘ someone says in the premiere of ‘La Brea,’ at least being honest about the comparisons that this new NBC series invites.
Still, beyond joining the list of shows built around Big Mysteries They Won’t Answer Right Away, the title and premise — in which a giant hole appears in the middle of Los Angeles, right along La Brea Avenue — also happen to dovetail with an old Hollywood joke, about how privileged westside residents (including the talent agencies situated in and around Beverly Hills) try to avoid venturing east of La Brea.
Well, finally everyone has an excuse, and in the case of the show, it’s a doozy. As for where the giant sinkhole leads, those are the questions ‘La Brea’ will have to answer if it lives long enough. Or, given the recent history of mystery-based NBC dramas (hello, ‘Manifest’), maybe we should all just wait until it makes the commute over to Netflix. (For now, the show will air after ‘The Voice’ on Tuesdays.)”

Stop the presses for ‘Citizen Hearst’ 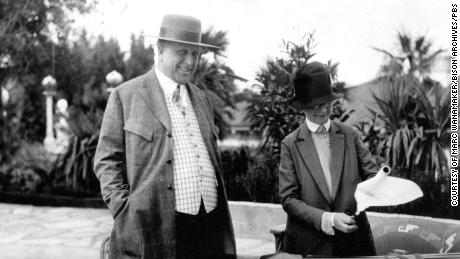 Can’t wait for “Succession”? Lowry’s says PBS might have a media mogul to hold you over:
“PBS’ ‘American Experience’ delivers a top-shelf two-part documentary beginning Sept. 27 about William Randolph Hearst, connecting the early mogul’s 20-century practices directly to the media climate of today, using crime and fear to sell newspapers and unleashing a ‘spiral of sensationalism’ in his war with rival publisher Joseph Pulitzer.
The doc also goes into Hearst’s personal life, from building his castle at San Simeon to his relationship with Marion Davies, and the way he used his assets to advance his objectives, which included completely ignoring the release of ‘Citizen Kane’ in his newspapers.
Still, the part that really resonates comes from using this rear-view mirror to see where we are — and where we’re heading. As David Nasaw, author of ‘The Chief: The Life of William Randolph Hearst,’ puts it, ‘He invents the world that for better or worse we now inhabit.’ 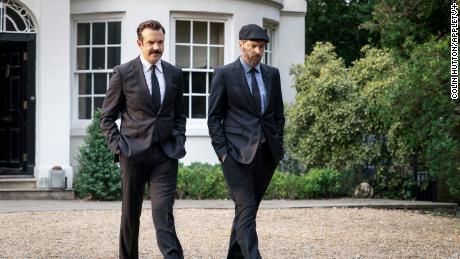 If you’re tired of people praising “Ted Lasso” and the show winning all the awards, skip this section of TV OT.
I’ll be the first to admit that last week’s Coach Beard-centric episode was not my favorite, enough though I acknowledge and accept its intention. The show needed some breathing room after a very heavy end to episode 8, in which Ted disclosed his father died from suicide. So taking a week off to focus on Coach Beard was understandable. (I thought it narratively fell short but was still wonderfully directed.) This week, however, was a return to form. (Spoilers for the episode ahead.)

“No Weddings and a Funeral,” written by Jane Becker, was a glorious return to the classic “Lasso” mix of laugh-out-loud lines (Roy telling Keeley to avenge his death) and weighty moments that hit at the heart (Ted describing his father’s efforts to help him with a school assignment). Whether you’re in the camp that has loved this season (me) or not, there’s no denying that when “Ted Lasso” is good, it’s an unmatched TV MVP, worthy of the praise and awards it gets and then some.
I know it’s hard to keep rooting for a show when you feel like it’s let you down — trust me, I’ve given up plenty — but episodes like this are why you have to stick with it. You can’t give up on “Ted Lasso.” After all, Ted Lasso would never give up on you.
Source: Read Full Article