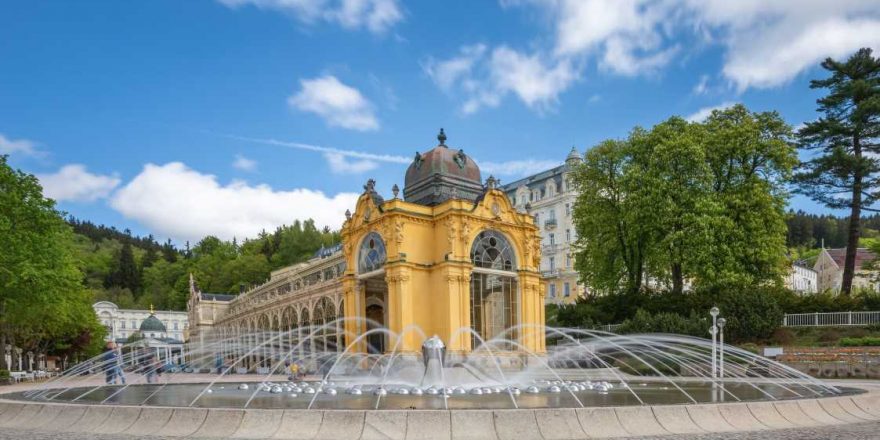 From the bath towns of Europe to a desert with the world's oldest mummies, 34 new sites are now part of UNESCO's World Heritage List.

Only twice in the program's 43-year history have more new sites made it to the prestigious list in a single year. While the number isn't without precedent, the way the World Heritage Committee deliberated this year is.

Of that, 34 sites were added to the list — with more than 80% of them located in Europe and Asia.

Nearly half of the new UNESCO World Heritage Sites are in Europe.

While the city of Bath has been a World Heritage Site since 1987, the effort to get a transnational collection of the Great Spa Towns of Europe on the list only began in 2012.

In 2021, 11 towns across seven European countries are being recognized — they include Vichy in France, Baden Baden in Germany and Spa in Belgium.

According to UNESCO, the towns pay tribute to the European spa culture that emerged in the early 18th-century, whereby natural mineral water was extracted for practical, therapeutic and recreational use.

Another of the 16 European sites to make the list is Mathildenhohe Darmstadt, a former artist's colony in Darmstadt, Germany. Established in 1897, the estate features 23 elements, such as the Wedding Tower, a Russian Orthodox church, various gardens and 13 houses and artists' studios that were built for artists and exhibitions.

The slate landscape of Northwest Wales is the U.K.'s 33rd site on the World Heritage List. The area was once a thriving location for quarrying and mining slate, which changed the region's agricultural identity to an industrial one. The site is also home to historical settlements, gardens, harbors and a railway system.

The other newly inscribed sites in Europe are:

More than a third of the newly crowned UNESCO sites are in Asia.

Two sites in India were named to the World Heritage List this year, one being the Kakatiya Rudreshwara Temple. Located in the southern state of Telangana, the temple complex was constructed over a 40-year period in the early 13th-century. The temple features intricately carved walls and pillars and is known for its bricks which are said to be so light, they can float on water.

Fast forward to the 20th century for a feat of more modern engineering — the Trans-Iranian Railway. The train connects the Caspian Sea in the northeast of Iran to the Persian Gulf in the southwest. The picturesque railway travels over four different geographical features — mountain ranges, highlands, forests and plains — and was completed in 1938.

The 1,394-kilometer (866-mile) track required the construction of 360 bridges and 224 tunnels, according to UNESCO. The railway played an important role in Iran's economic, cultural and political development, and it became a symbol of development and modernism in the country.

The other newly inscribed sites in Asia are:

The Chinchorro mummies are the oldest purposefully preserved human remains in the world. At more than 7,000 years old, they predate their better-known Egyptian counterparts by two millennia.

The mummification process was practiced by a settlement of fishers and hunter-gatherers where the Atacama Desert meets the Pacific Ocean in what is now present-day Chile.

So far, archaeologists have found more than 300 mummies which are a tribute to the Chinchorro's complex mortuary practices. Unlike Egyptian tradition where mummification was reserved for pharaohs and the wealthy, the Chinchorro preserved remains of people across the social spectrum. Bodies of men, women and even children were preserved in bandages that were painted black or red.

The Church of Atlantida — along with its bell tower and underground baptistery — is a complex 45 kilometers (28 miles) from Uruguay’s capital of Montevideo.

Built in 1960 in an Italian paleo-Christian style, the church is a symbol of Latin American spatial architectural achievement. The wave-shaped walls and ceilings are built in exposed brick, and the ceiling features touches of colored glass. The most impressive part of the complex is the bell tower; the spiral staircase made of red brick combines with natural light to create a geometric illusion.

The Ivory Coast's Sudanese-style mosques are one of two sites from Africa on this year's list.

The mosques' distinctive architectural style pays tribute to trans-Saharan trade that expanded Islamic culture on the continent. Its use of traditional African materials along with Islamic features like domes represents a fusion of the two cultures that has persisted since trade first began between them in the 17th century.

Ivindo National Park is Gabon's second site on the World Heritage List. The park is one of five "natural" sites added in 2020 and 2021, separate from the list's "cultural" sites. Located on the equator, the rainforest is home to rapids, blackwater rivers, waterfalls and wildlife such as elephants, gorillas and pangolins.

Two 16th-century monasteries built near central Mexico's Popocatepetl volcano, the country's second-highest peak, were inscribed onto the World Heritage List in 1994. The redrawn lines now include a third monastery within its boundaries.

No sites in Australia or Antarctica were named this year either.

In total, there are now 1,154 sites on the World Heritage List. Some 52 of these are on UNESCO's "In Danger" list, including the Old City of Jerusalem and the United States' Everglades National Park.

The "Danger List," as it's known, is the first step to these badges of honor being taken away. Liverpool's Maritime Mercantile City was deleted from the list this year, becoming only the third site to suffer this fate since the inception of the World Heritage List.