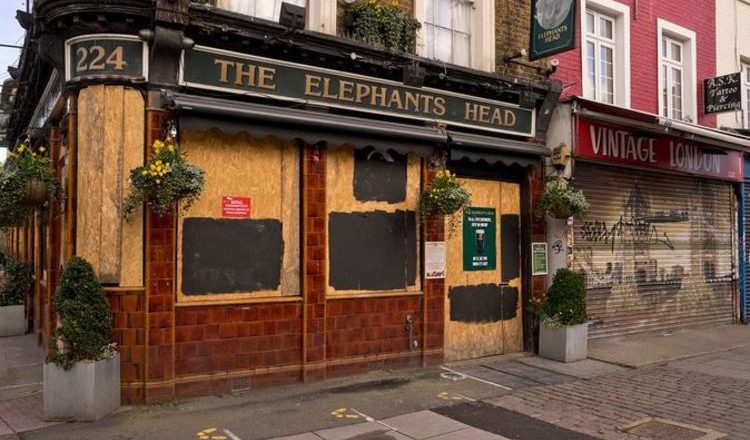 According to analysis of Government data by real estate adviser Altus Group 37 pubs a month on average have been demolished or converted into other uses. The total number of pubs serving communities in England and Wales now stands at 40,173. At the end of 2019 before the pandemic hit the number was 41,063. Speaking to Express.co.uk Chief Executive of the British Beer and Pub Association Emma McClarkin said the figures were “a sign of the times” adding that five percent of pubs were lost in 2020.

She warned next year loses could increase further.

Pubs had been seeing declines even before Covid with Altus Group’s figures finding a total fall of 2,277 over the last four years.

Since then declines had steadied but concern is growing now the cumulative impact of successive Covid restrictions could make things worse.

The situation has been brought into sharper attention with the question marks hanging over the industry due to Omicron with customer levels falling in recent weeks and rising cancellations.

Robert Hayton, UK President at Altus Group said: “Pubs continue to bear the brunt of coronavirus restrictions but have, thankfully, proved remarkably resilient however it remains to be seen what impact Omicron has on numbers next year as this could be the straw that broke the camel’s back for many.”

The Christmas and New Year period is typically a time of major revenue for the pub trade which sees it through the traditionally quieter months of January and February.

With the threat of restrictions still hanging over New Years Eve though many are uncertain how much to stock up.

Speaking to Express.co.uk this week Andy Wood, Chief Executive of brewer and pub owner Adnams, described the industry as being “between a rock and a hard place”.

He warned that 25 percent of the beer produced could go down the drain if restrictions were implemented over New Year.

This week the Treasury announced a £1bn support scheme for hospitality businesses with grants of up to £6k per premises.

Ms McClarkin said the support was welcome but questioned whether it would be enough, adding that the speed of the grants was also highly important.

Chief Executive of the Night Time Industries Association Michael Kill said the support: “Is far too little and borders on the insulting.”

According to the data from Altus Group across the country Cornwall currently leads as the area with the most pubs, home to 585, followed by Wiltshire, Leeds and Liverpool.

The North East came the lowest with just 1,983 pubs.