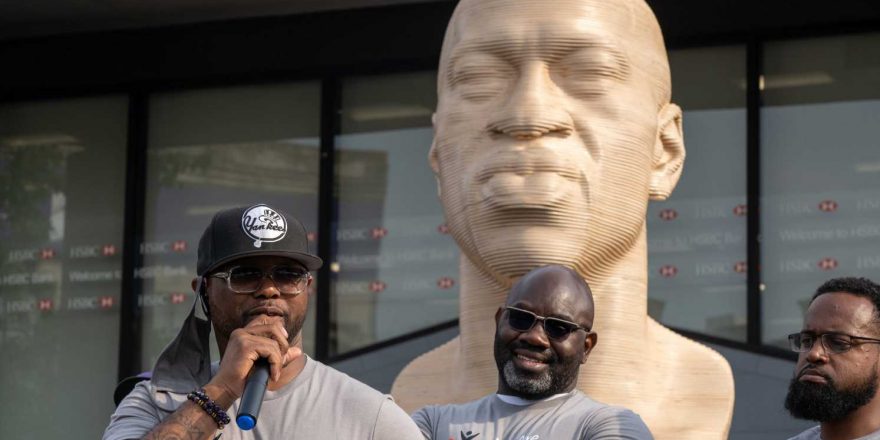 A year after protesters toppled statues of colonizers and slaveholders across the U.S., several cities unveiled new monuments this week to mark the Juneteenth federal holiday and honor the lives of George Floyd, abolitionist Harriet Tubman and many others.

Terrence Floyd unveiled a statue of his brother in Brooklyn Saturday morning and led dozens gathered at a Juneteenth rally outside the Brooklyn Public Library in a chant of “We are Floyd.”

“My brother was the sacrifice, so I need y’all to continue to pay attention and keep my big brother’s name ringing in the ears of everyone,” Floyd said, according to a livestream of the event.

‘A year that’s ripped my heart out’: George Floyd family struggles with loss a year since killing

Terrance Floyd speaks at the unveiling of a statute dedicated to his brother George Floyd at Flatbush Junction on June 19, 2021, in the Brooklyn borough of New York City. (Photo: David Dee Delgado, Getty Images)

George Floyd was murdered at the hands of Minneapolis police on Memorial Day, 2020, as bystanders recorded video of the incident and pleaded with officers to get off of his body. The killing spurred thousands of protests against police brutality in the U.S. and abroad and reinvigorated the Black Lives Matter movement.

The 6-foot-tall sculpture of Floyd’s head by artist Chris Carnabuci is expected to be on display at Brooklyn’s Flatbush Junction for several weeks before moving to Union Square in Manhattan, according to the office of New York Council Member Farah Louis.

Meanwhile, in Newark, New Jersey, the city unveiled a 700-pound bronze statue of Floyd outside city hall on Wednesday.

“George Floyd represents a lot more than himself at this juncture in history,” Newark Mayor Ras Baraka said at an unveiling ceremony.

Baraka invoked the legacy of 14-year-old Emmett Till, who was lynched in August 1955 while visiting relatives near Money, Mississippi. There were hundreds of years of lynchings in the U.S. before Till’s killing, Baraka said, but it was his death and his mother’s advocacy that spurred a generation of activists to become involved in the Civil Rights Movement.

“We believe George Floyd has the same impact today as Emmett Till’s death did then,” Baraka said.

Actor and filmmaker Leon Pinkney spoke at the ceremony and said he had commissioned sculptor Stanley Watts to create the statue to “honor his (George’s) humanity” and encourage protesters to continue pushing for justice.

“The statue was to cause them to continue to remember why they marched during such a horrific pandemic. I didn’t want them to go back to status quo,” Pinkney said.

Watts, who became emotional at the ceremony, said he intentionally depicted Floyd as “peaceful” and “larger than life.” The sculpture portrays Floyd relaxing on a park bench.

Juneteenth 2021 celebrations: What to know about the holiday

Racial justice: Employees say their companies aren’t sticking to the promises they made

A person paints in the final letters of George Floyd's name at a statue unveiling in his honor at Flatbush Junction on June 19, 2021, in the Brooklyn borough of New York City. (Photo: David Dee Delgado, Getty Images)

The next day, Baraka also announced the design for a Harriet Tubman monument to replace a statue of Christopher Columbus removed last summer. The monument, designed by artist Nina Cooke John, is expected to be installed next summer in Washington Park, which will be renamed Tubman Square, according to the mayor’s office.

“As a woman, a Black woman, and mother of three girls, I am delighted to bring my memorial for Harriet Tubman to life in Newark,” John said in a statement. “My design creates a welcoming space for people to connect with Tubman as well as interact and reflect on their own liberation from whatever weight they might be carrying. This is a monument for the community and by the community.”

Just in time for #Juneteenth, Mayor @rasjbaraka has unveiled the final design for the new Harriet Tubman monument. Artist Nina Cooke John’s design “Shadow of a Face” will be installed in 2022 to honor the abolitionist’s legacy and connection to Newark. https://t.co/xnPakvbEZgpic.twitter.com/WzWMYnxDE1

In San Francisco, an artist unveiled a new public work Friday evening in Golden Gate Park, at the site of the former century-old Francis Scott Key statue. Last summer, a group toppled the statue of the slaveholder, known for writing “The Star-Spangled Banner.”

The new installation by Oakland-based artist Dana King, “Monumental Reckoning,” includes 350 statues representing the first souls kidnapped from Africa in 1619 and bound for enslavement in America, all encircling the vacant plinth where the statue of the former slaveholder once stood.

The fight over monuments: Who is an American hero and who is a ‘symbol of hate’?

Last year, protesters toppled statues in cities across the country and pressured local elected officials to remove monuments with ties to slavery and colonialism.

More than 90 Confederate monuments were taken down or moved from public spaces in 2020 following Floyd’s killing, and about 700 remain, according to data from the Southern Poverty Law Center released earlier this year.

Statues of Christopher Columbus also came under particular scrutiny. Columbus made four expeditions to the Caribbean and South America over two decades, enslaving and decimating local populations and opening the floodgates of European colonization.