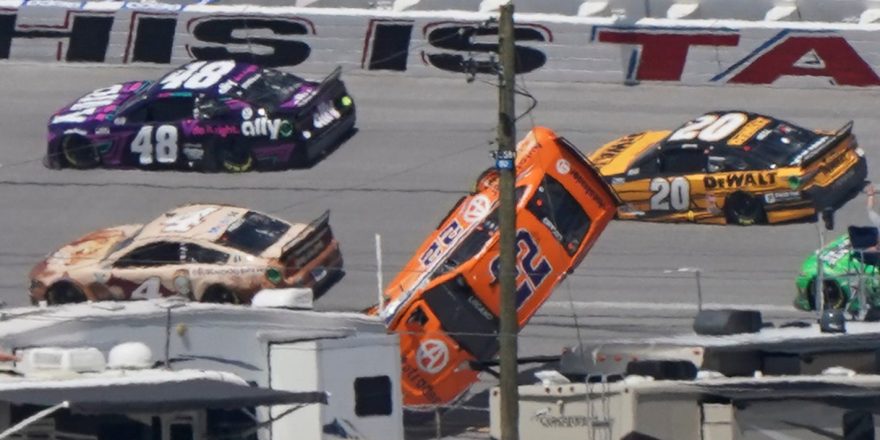 Joey Logano went for a wild and scary ride Sunday at Talladega Superspeedway when he was involved in a wreck, flipped upside down and slid down the track before popping back upright. Luckily, the No. 22 Team Penske Ford driver is OK.

Early in the GEICO 500 at the famous 2.66-mile track, drivers were racing hard at the end of the first of three race stages for the playoff and regular-season points awarded to the top finishers in each stage. So on the final lap of the first stage — Lap 60 of 188 total — things got intense.

Matt DiBenedetto was leading the field in the outside lane in his No. 21 Ford, followed by Ryan Blaney, Logano, Denny Hamlin and Ricky Stenhouse Jr.

Hamlin in the No. 11 Toyota pushed Logano up to the rear bumper of Blaney in the No. 12 Ford, as Stenhouse in the No. 47 Chevrolet was on Hamlin’s bumper. Sandwiched together up at the front of the field, Hamlin moved out of the lane to the inside, and that’s about when Stenhouse appeared to make contact with Hamlin, turning him into Logano and setting off a terrifying chain reaction.

WATCH: Wildest and most memorable NASCAR wrecks at Talladega

Joey Logano gets airborne and goes for a WILD ride at Talladega! pic.twitter.com/7E9vCyqCZD

While Logano’s car went airborne and flipped, it barreled right toward Bubba Wallace in the No. 23 Toyota.

Somehow, Wallace's car suffered only mild damage, and although five cars were involved in the wreck, everyone but Logano was able to keep racing. It wasn't "The Big One" that fans are used to seeing at Talladega, but it was obviously still an alarming moment.

Here what sent Joey Logano up and over at Talladega: pic.twitter.com/NP8zgz6dWB

An absolutely terrifying view for Wallace. Here’s another angle:

Bubba Wallace: “I’m telling you, my underwear is worse than the car right now.” pic.twitter.com/HjHAhl0vTx

Thankfully, Logano was OK after literally flying through the air.

He was evaluated and released from the infield care center, and then he shared his perspective on what happened.

Logano with strong words about this package following his accident: https://t.co/BtbCqwnzMt

“I guess I don’t know exactly what to think. It’s a product of this racing, and on one hand, I’m so proud to drive a Cup car that is safe, that I can go through a crash like that and get out and speak about it. On one hand, I’m mad about being in the crash. The other thing, I’m just happy I’m alive. On another hand, I think when we are going to stop? Because this is dangerous doing what we’re doing. I got a roll bar in my head. That is not OK.

“I’m one hit away from the same situation Ryan Newman just went through. I just don’t feel like that’s acceptable. A lot of it is the big spoiler and these big runs, the pushing and all that. It’s no one’s fault. Denny is trying to go and [Stenhouse] is trying to go. It’s a product of this racing. We have to fix it though because someone already got hurt, and we’re still doing it, so that’s not real smart.”