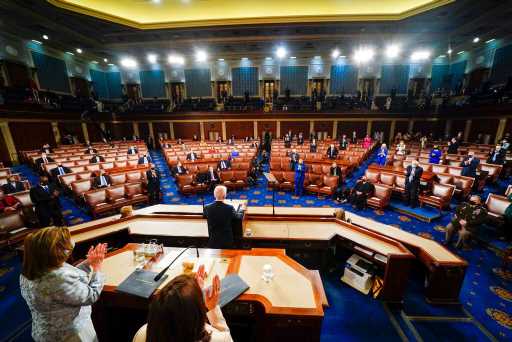 Joe Biden’s first address to a joint session of Congress last night was both a very traditional and untraditional affair, but it was no Donald Trump – in more ways than one.

Like his predecessors, the 46th POTUS walked down the aisle in the House chamber to applause, went up to the podium to greet the Speaker and the Vice President and then turn to the cameras and elected officials and assembled dignitaries to pitch his agenda.

Unlike past Presidents, Biden entered wearing a mask and only had an audience of 200 total because of coronavirus safety protocols. Also, historically seated next to Nancy Pelosi, the Veep and first in line to the Presidency was for the first time a woman, former California Senator Kamala Harris. Additionally, coming just over three months after MAGA morons attacked the Capitol and attempted an insurrection, there was also Joe Biden’s wide ranging plans for a progressive overhaul of the function and role of government in American life, a pink slipping of the Reagan Revolution that has dominated DC for the past 40 years.

Long-ish speech (it clocked in at just over an hour) short: The man himself has an around 54% approval rating, but a poll run by CBS-YouGov found Biden’s remarks on Wednesday night got the thumb up from 85% of respondents.

However, with a small crowd in the House chamber, Biden had a relatively small draw outside, it seems.

In unadjusted fast affiliate data, the President’s speech drew around 11.6 million viewers in the 9 PM ET hour. Add, Univision to that batch of ABC, CBS, NBC and Fox and the result inches up to 12.62 million for the speech that started around 9:10 PM ET.

ABC was in first place with 3.5 million viewers in that 9 PM ET hour. CBS was close behind with 3.3 million, followed by NBC’s 3.2 million and Fox’s 1.6 million.

Over, the 9 – 11 PM ET time period, ABC was sill tops with its coverage and pre and post-speech Presidential Address to Congress and the Nation analysis. The Disney-owned net drew an audience of 3.1 million and a 0.8 rating in the 25-54 news demographic, according to Nielsen. In terms of sets of eyeballs, CBS and NBC were tied for second place with 2.8 million tuning in respectively. Focusing on the 25-54s, NBC’s Biden Address To Congress snared a 0.7 rating, while CBS’ President Biden Address To Congress got a 0.5

Of course, that will all move upwards when all full time zone adjustments occur and when the likes of CNN, MSNBC and Fox News Channel are added to the mix. For all the broadcasters’ still considerable reach, cable news is where a hefty portion of Americans get their political information from, as Rupert Murdoch and Lachlan Murdoch can tell you.

What we can also tell you at this point, when everything from the Super Bowl to the Oscars are seeing new lows, is that Biden’s first address to a sparse Congress was one of the least watched in recent history.

To Thursday throwback to the last POTUS, the current POTUS’ talk was down about 49% from a newly installed Trump’s first speech to a packed House chamber back on April 30, 2017. In a preview of a chaotic and dangerous reign to come, the factually challenged remarks by the former Celebrity Apprentice host went up to around 48 million when all the reporting networks were tallied up in the final numbers.

We will update with more Biden numbers as we get them. It is worth noting that for the most part, the first joint address to Congress is usually some of the best viewership numbers a President gets over their time in office, as the novelty factor is still high. I mention that because, unlike Trump, Barack Obama, and other recent Commander In Chiefs, Biden has been a part of the national political life for decades. As well, it’s not like the President isn’t literally giving a speech or remarks almost every day since he took office.