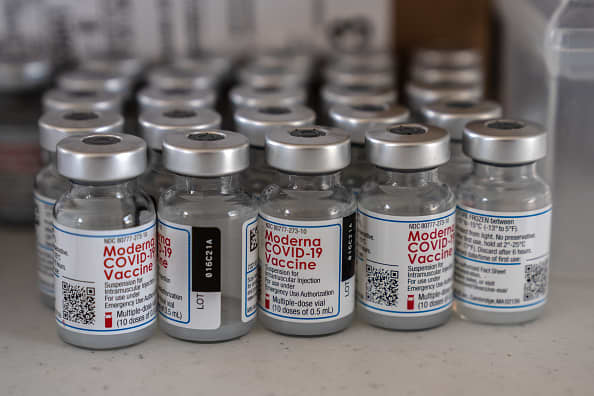 Japan's Ministry of Health, Labour and Welfare suspended the use of more than 1.6 million doses of Moderna's Covid-19 vaccine Thursday following reports of contaminated vials at multiple vaccination sites there.

Takeda Pharmaceuticals, which distributes the vaccine in Japan for Moderna, said it notified the ministry after several vaccination sites reported an unspecified foreign object found in one specific lot.

"We requested that Moderna, the product owner and manufacturer, conduct a thorough investigation to determine the precise root cause of the issue," Takeda said in a statement.

Takeda also said that it is not aware of any "significant safety concerns" stemming from the contaminated doses.

Moderna said it's been notified of the problem and is looking into it.

"The company is investigating the reports and remains committed to working expeditiously with its partner, Takeda, and regulators to address this," Moderna wrote in a statement.

Moderna said it believes the manufacturing issue was generated in one of the lines used at its contract manufacturing site in Spain, adding that it didn't appear to affect the safety or efficacy of the shots.

"Given the company's priority to assure quality, and out of an abundance of caution, Moderna has put this lot and two adjacent lots on hold," the company said.

Rovi, the Spanish pharma company that bottles Moderna vaccines said it is investigating the situation and said that the contamination seems to be limited to some batches meant to be distributed to Japan, according to Reuters. Rovi shares dropped 13% in mid-day trading.

Takeda discovered the contaminated vials on August 16 and reported it to Japanese officials on Wednesday, according to NBC news. The company said the delay was because the contamination of the vials and affected countries needed to be confirmed.

Japan's chief cabinet secretary, Katsunobu Kato, told reporters Thursday that contaminated doses were administered to an unknown number of Japanese residents, though there have been no reports of ill effects, according to the New York Times.

Doses from the contaminated lots were set to be used at mass vaccination sites at large companies and universities, but all have been halted, according to Reuters.

All of the contaminated vials were made at manufacturing sites in Spain. It is still unclear if other countries besides Japan have been affected, though the European Medicines Agency said it's also investigating the issue.

"EMA is investigating the matter and has requested the marketing authorisation holder to provide information on any potential impact on batches supplied to the EU in addition to details on the ongoing root cause investigation," the agency said in a statement to Reuters.

Moderna told CNBC there is "no evidence" that other countries could have been affected because "the lot comes from a batch that was manufactured exclusively for Japan."

There is no "expected timeframe for completion" of the investigation into the contaminated doses but Moderna says it is working with its contract manufacturer, its distributor and the government.