Home » IBM is hunting for a smaller NYC office now that 80% of its employees won't come in every day. It's a sign of the times. 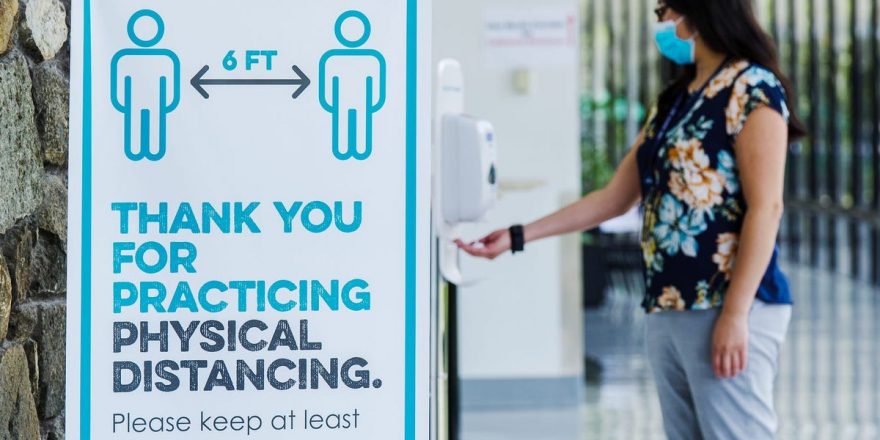 IBM is hunting for a smaller NYC office now that 80% of its employees won't come in every day. It's a sign of the times.

The pandemic has prompted some office tenants to cut back their footprints and others to reimagine how their workspaces will look and function in a world where social distancing and remote work may become the norm.

For IBM, it has ushered in both a planned downsizing and a redesign of its New York City operations.

The company told Insider it has slashed the size of a New York City office it plans to lease in order to consolidate several Manhattan outposts. The company is searching for roughly 300,000 square feet in Manhattan, Joanne Wright, a vice president of enterprise operations and services at IBM, told Insider. That is a 40% reduction from the 500,000 square feet she said the company was looking for last summer.

The tech company, which has said it will embrace remote work and also announced plans late last year to spin off a large component of its business, will also embrace what one executive called an “agile” design that will allow the space to be easily reconfigured to adapt to different uses.

“We can see people showing up and meeting in a group and being innovative, or it could be a space for individual learning cells and problem-solving, and then an open garage event for clients,” Wright said. “When people return, it’s going to be because they want an experience.”

The downsizing is the latest in a succession of such decisions by major corporate office users, who have sought to cut back their office footprint as they embrace policies that will allow their employees to work remotely.

IBM’s chief executive, Arvind Krishna, recently stated that 80% of its 350,000 workers around the globe may work flexibly in the future, splitting time between the office and home. He estimated that up to 20% of its workers could be entirely remote post-pandemic.

Wright also attributed at least part of the New York office downsizing to a spinoff that IBM is planning for its IT business, which could diminish the size of its workforce by 25% and reduce its number of employees in New York. The spinoff will be a separate company with its own offices and facilities.

“We’re still out there looking for space,” Wright said. “We’re just reevaluating along the way.”

IBM has not yet chosen a specific location for the new office.

There is growing concern in the commercial real estate industry that remote and flexible work strategies could become permanent vestiges of the pandemic and reduce overall demand for office space across the nation, but particularly in cities that were hit hard by the virus crisis such as New York City. Already, tenants have cast off record amounts of sublease space.

IBM’s new office will employ an “agile” design, Wright said, meaning that instead of traditional corner offices, assigned desks, and other spaces dedicated to specific uses, such conference rooms, the company will design its space so it can used for different tasks.

As IBM employees return to work, the company says it will use its artificial intelligence platform, Watson, to help monitor whether too many workers are in the office at the same time to maintain social distancing. The company gave a recent presentation on return-to-office protocols, telling employees that they will need to report their temperatures online and answer a questionnaire that will screen them for COVID-19 symptoms before they will be admitted to the office each day.

IBM is the latest to re-envision the office workspace as a blank canvas that can pivot to the changes that may take hold post-pandemic, including flexible work schedules, where employees may cycle in and out of the office.

As Insider previously reported, JP Morgan Chase is planning to utilize a ‘universal design’ for the interiors of the new $3 billion headquarters it is about to begin building at 270 Park Avenue in Midtown Manhattan. The design strategy appears to be a response to a recent statement by the bank’s chief executive Jamie Dimon, who imagined that only 60% of the bank’s 250,000 workers may be at a desk on any given day.

“We are learning from this year, and always design our spaces to be flexible to adapt to any business or market changes,” a JP Morgan Chase spokesperson told Insider.

Experts say the changes mean that offices will be designed with areas that can utilized for communal work, or cordoned off for private collaboration or meetings. Seating will be flexible and could quickly scale up or down depending on how many workers report to the office on a given day. The new office design is aimed around the concept of letting employees choose between a variety of settings that best suits the particular work or collaboration they are tasked with.

“There’s going to be more autonomy given to talent in the future where is best for them to work and how they work in a setting,” said Amanda Carroll, a managing director at the architecture firm Gensler, which is working with IBM to create a flexible design for the company’s offices. “The office will be less prescriptive.”

The workplace will also be more technologically sophisticated, with more wireless systems that allow furniture and personnel to move within a space, help workers reserve desks or private spaces when they are in the office, and have better audio and video systems that allow employees to communicate with workers or business partners who are remote.

“We’re actively incorporating tech that will facilitate more remote participation in the future,” Carroll said. “Whether its your colleague or client or someone you’re recruiting, geography is going to become less of a boundary and better remote inclusion through technology is going to be a priority.”