Home » ‘I was kicked out’: Ousted California principal escorted off campus after graduation speech 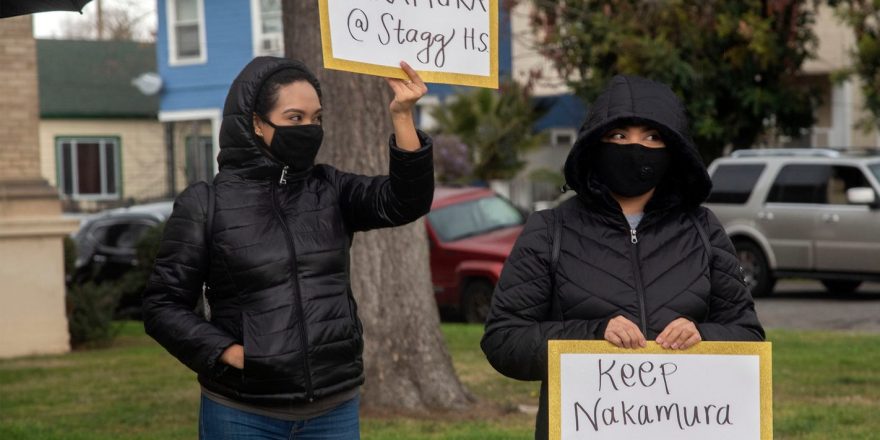 ‘I was kicked out’: Ousted California principal escorted off campus after graduation speech

STOCKTON, Calif. – An ousted California principal used the 2021 graduation stage as his platform to deliver a controversial speech that ended with him being escorted off campus.

During a Thursday morning commencement, Ben Nakamura, former principal at Stagg High School in Stockton, California, focused more on his personal grievances with the school district rather than the students he was meant to send off into the world, district officials said.

When Nakamura finished his speech, he walked off stage and was greeted by two men. The men had a conversation and then walked Nakamura off the field.

Meza said Nakamura was walked off campus for his and the general public’s safety.

In his speech, Nakamura said he would not return to Stagg because Stockton Unified School District trustees voted to remove him as the school’s principal.

Nakamura told students he was ousted in a 4-3 vote by the board, despite pleas from the community, staff and students to keep the principal.

No reason has been given for his dismissal.

“I was kicked out for one reason that I truly love you and this community,” Nakamura said. “I came here to serve you, to love you, to be in the mix and the grind with you.”

He also encouraged students to study and do their best. He shared experiences from his personal upbringing, including his mother’s death to a heroin overdose, and mentioned how much he loved his job at Stagg.

He touched on race, violence in neighborhoods, fighting for higher education, and working to set the bar for future graduating classes.

Brian Biedermann, director of educational services, confirmed Nakamura’s keys were confiscated and he was not allowed back at graduation ceremonies.

Nakamura was set to speak again at noon and 3 p.m. Thursday during commencement ceremonies.

To ensure social distancing, Stagg High School divided its graduating class into three groups, each to have its own ceremony.

Stagg High P.E teaser and tennis coach Shannon Markley holds up a sign in support of principal Ben Nakamura during a protest at SUSD headquarters in downtown Stockton. Markley was with a group from Stagg High School protesting the possible dismissal of Nakamura who was on a list of 104 staff cuts that the school board was considering. CLIFFORD OTO/THE STOCKTON RECORD (Photo: Clifford Oto, CLIFFORD OTO/THE STOCKTON RECORD)

Earlier this school year, SUSD announced a series of layoffs happening across the district. Though the list did not name employees, the community learned that Nakamura was among them.

In past SUSD meetings, Stagg community members met outside the district’s offices to protest Nakamura’s dismissal, showing their support for their principal.

Stagg High teachers and sisters Ana Orzonio, left and Sandra Orzornio hold up signs in support of Stagg High School Principal Ben Nakamura during a protest at Stockton Unified headquarters in downtown Stockton on March 9. They were with a group from Stagg protesting the possible dismissal of Nakamura, who was on a list of 104 staff cuts that the school board was considering. (Photo: CLIFFORD OTO/THE STOCKTON RECORD FILE)

“There were strict COVID-19 guidelines, so no principals were allowed to give a speech,” Meza said. Other schools did do principal introductions during ceremonies, but Nakamura’s remarks “didn’t follow COVID-19 guidelines,” as established by Biedermann for SUSD according to state health protocols, said Meza.

According to the California Department of Health graduation guidelines, speakers at graduations may remove their masks as long as they are at least 6 feet away from other attendees and should keep their comments brief while unmasked.

Additionally, recommendations to virtually share speeches are listed for “commencement ceremonies and celebrations that involve more people than are permitted by the mandatory capacity caps,” when physically meeting.

Nakamura said he was not fully aware of what he was authorized to do because so many policies and procedures were changing “pretty much on a daily basis.”

“I did not do that knowing that I was violating any policy,” he said.

Nakamura said that if he hadn’t spoken, he would not have had an opportunity to say goodbye to the students.

“I wanted to tell the kids why I left, so they would know I did not leave them, I did not turn my back on them,” he said.