The nationwide closure of Cineworld’s theatres was the disaster movie nobody working in the UK’s battered leisure industry wanted to see.

The mothballing of the country’s largest cinema operator not only spells hardship for its 5,500 staff but has set off a chain reaction that threatens the livelihoods of many more working in the neighbouring restaurants that rely on the multiplex trade.

On Friday, the billboards outside the 14-screen Cineworld in Feltham, west London, were still advertising Tenet and Bill & Ted Face the Music, but the next screening will be months, rather than hours, away.

At the start of 2020 the future was bright for the Leisure West park. The owner was ready to refurbish and install a “superscreen” to give an extra wow factor to the Bollywood films that draw huge crowds to the venue, making it one of Cineworld’s top five performers. 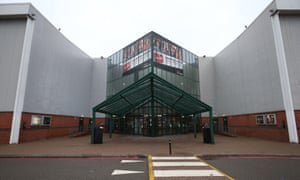 With a Tenpin bowling alley and family friendly restaurants such as Pizza Hut, Burger King and Frankie & Benny’s, the leisure complex, like 124 others around the country, is in normal times a destination for birthday parties, date nights and family outings. But with cinemas closed will people still come? Two out of every five Cineworld cinemas are sited on leisure parks.

Mark Jason William, a Cineworld regular, described the temporary loss of his local cinema as “gutting”. “We come here, then go to Burger King to make a night of it.”

But the closure does more than curtail social lives. It is a blow to a London borough already hard hit by the travails of Heathrow airport, a major local employer.

The crisis in the aviation sector has already put more than 40,000 jobs at risk in the borough of Hounslow, with a recent report forecasting the economy will contract by 11% this year.

The restaurants and entertainment brands that populate the Feltham leisure complex are typical of other parts of the country and have already been battered by the Covid-19 crisis.

What used to be Tex-Mex dining chain Chiquito has closed down, but in a hurry, with menus and novelty sombreros still visible on the tables. The Pizza Hut and Frankie & Benny’s are still trading, having survived shutdown programmes which have closed many of the brands’ other outlets. The Buzz Bingo hall has also made the cut in a company overhaul that involved 26 other closures.

The sign outside Tenpin advises would-be bowlers: “In a world where you can be anything, be kind.” It is a gentle reminder to have patience as staff deal with coronavirus red tape that has halved the capacity of bowling alleys.

Ronald Nyakairu, an analyst at LDC, said social distancing in restaurants and limitations on party sizes mean leisure businesses have had to “miss out on events such as children’s birthday parties, which provide a key revenue stream”.

“Cinemas have been hampered by the lack of box office films and gyms were one of the last categories allowed to reopen under government guidelines,” he says. With a fifth of the country’s cinemas now closed or operating weekend-only hours “footfall to these locations is likely to drop further, making life even harder for the surrounding businesses”.

Retail and leisure parks used to be a safe prospect for investors, thanks to reliable rent-payers and Britons eager to spend their free time shopping or combining a meal out with the latest blockbuster movie. But rents are falling fast or not being paid at all, hitting the owners, many of whom are managing pension-fund cash.

The biggest leisure park investors are Legal & General and Land Securities, but Leisure West is owned by the Universities Superannuation Scheme (USS) which bought it for £33m in 2011 and is grappling with a deficit put at up to £18bn.

It is “not a great time” to be the landlord of a leisure scheme conceded Ross Kirton, head of UK leisure at Colliers International.

“Box office admissions in January were 16.5m people, whereas the figure for August was 2.5m,” said Kirton. “It’s about the sheer volume of people and the ‘dwell time’ cinemas create. The impact on a restaurant of a cinema closing is only going to be negative.”

Turning over space to logistics firms who need warehouse space to serve the UK’s booming online shopping industry, would be one way to breathe into new leisure parks, suggested Nyakairu.

“Historic data shows that units that fail to find a new tenant after two years are likely to never be re-let. Leisure parks will need to reinvent themselves if they are to survive.”