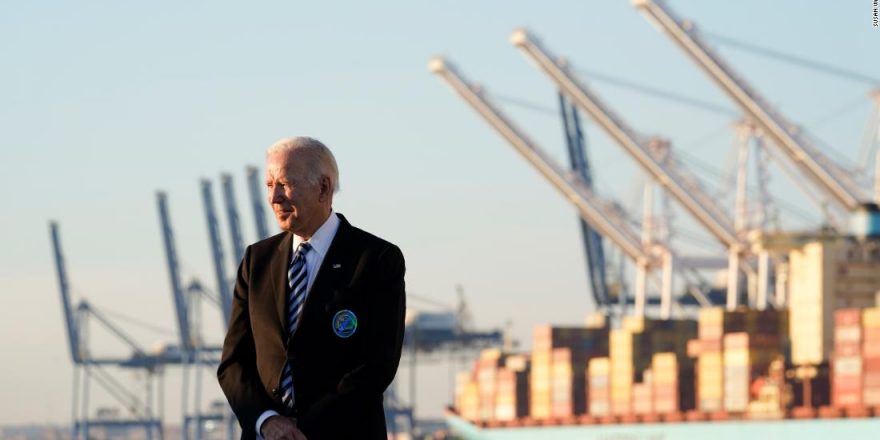 (CNN)President Joe Biden on Tuesday announced the release of emergency oil reserves to combat high energy prices ahead of the busy holiday travel season, but it will be weeks before the barrels hit the market.

The Department of Energy will release 50 million barrels of oil from the Strategic Petroleum Reserve, according to the White House — the largest release from the reserve in US history, Biden said.
Biden on Tuesday noted that the administration’s actions “will not solve the problem of high gas prices overnight.”

“It will take time, but before long, you should see the price of gas drop where you fill up your tank,” he said during his remarks. “And in the longer term, we will reduce our reliance on oil as we shift to clean energy.”

The release is aimed at addressing the lack of oil supply around the world, but its actual effect may be limited. In 2019, US petroleum use averaged approximately 20.5 million barrels of oil per day and in 2020 the US used on average about 18.1 million barrels per day, according to the Department of Energy’s Energy Information Administration. The EIA reports petroleum usage was lower in 2020 due to the Covid-19 pandemic.

The barrels of oil involved in Tuesday’s announcement will not hit the market until “mid to late December, depending on market take up,” according to a senior administration official.
“We’re taking action. The big part of the reason Americans are facing high gas prices is because oil producing countries and large companies have not ramped up the supply of oil quickly enough to meet the demand. And the smaller supply means higher prices globally, globally, for oil,” Biden said during remarks at the White House.
This release will be in coordination with several other countries, including China, India, Japan, the Republic of Korea and the United Kingdom. Officials believe the coordinated effort could potentially have more of an effect on lowering gas prices.
As of Friday, there were 604.5 million barrels of oil in the Strategic Petroleum Reserve, according to the Department of Energy.
The move comes as the White House faces mounting pressure to lower skyrocketing prices at the pump that are contributing to the biggest inflation spike in decades, causing frustration and anger among Americans.
The President on Tuesday called the issue a “problem” both in the US and around the world, and stressed that while spikes in prices are usually temporary, “it doesn’t mean we should just stand by idly and wait for prices to drop on their own.”
Thirty-two million barrels will be in exchange “over the next several months,” the White House said, and those barrels will eventually return to the Strategic Petroleum Reserve “in the years ahead.” Eighteen million barrels “will be an acceleration into the next several months of a sale of oil that Congress had previously authorized.”
“American consumers are feeling the impact of elevated gas prices at the pump and in their home heating bills, and American businesses are, too, because oil supply has not kept up with demand as the global economy emerges from the pandemic,” the White House said in a news release. “That’s why President Biden is using every tool available to him to work to lower prices and address the lack of supply.”
CNN previously reported Biden hoped to announce his decision to release the oil reserves during a Tuesday speech at the White House, but that the timing of such a move was still contingent on other nations finalizing their agreements.
The President made his remarks just hours before he is set to leave for a Thanksgiving break on Nantucket off the coast of Massachusetts.
Biden had been privately advised in recent weeks that tapping into the reserve wouldn’t do much to alleviate the current problems, but some Democratic lawmakers argued it could provide temporary relief at the pump. Senate Majority Leader Chuck Schumer was among the Democrats leading the charge.
Despite being told the impact may be negligible, the option to release oil reserves remained on the table, given Biden had few others, and officials believed coordinating with other countries could potentially have more of an effect. One option was increasing domestic oil production, but the White House has been wary of the optics of the President and his aides pushing for more drilling at home on the heels of the major UN climate summit COP26, where Biden promised that the US would “lead by example” on clean energy initiatives.
The national gas price average as of Tuesday is $3.403, according to AAA, which is significantly higher than the average at the same time last year when many people were not driving or traveling as much due to the Covid-19 pandemic. It is unclear how much the White House effort would immediately affect prices.
The move may instead largely act as a signal to OPEC nations and Russia that the US is serious about taking action to lower prices after those nations were reluctant to ramp up oil production to reduce prices.
Biden officials have warned the Saudis for weeks that the US would find alternative solutions if the price of crude oil topped $85 a barrel, officials said, which it did late last month. But Saudi Arabia has stood firm in refusing to increase output and has priced in — wrongly, in the view of US officials — the possibility that the US reaches a nuclear deal with Iran, two US officials said. The Saudis’ concern is that sanctions on Iran would then be rolled back, allowing the country to ramp up its oil production and compete with OPEC+.
Given that reluctance, the Biden administration viewed coordinating with the other nations as an attempt to undermine the cartel’s control of the market.
“The thinking has been, we can do this alone, or we can do it internationally — and the latter would be much more effective, especially when it comes to sending a message to the Saudis,” said one senior official involved in the discussions.
Biden has taken other actions as well. Last week, the President asked the Federal Trade Commission to “immediately” investigate whether illegal activity by oil and gas companies is pushing up gas prices. That move isn’t likely to have an immediate effect on gas prices for consumers, but is another example that Biden is seeking to show he is working to bring prices down. The FTC’s findings could also help in the long run if they find wrongdoing. The oil industry’s top advocacy group slammed that move as a “distraction.”
Energy Secretary Jennifer Granholm said at Tuesday’s White House press briefing that gas and oil companies have financially “taken advantage” of the high prices.

“We have 250 fewer oil rigs that are functioning today than we did before the pandemic, and yet, the oil and gas industry has leases on 23 million acres of public lands on and offshore,” Granholm said. “Over 9,500 permits have been issued that are not being used. At the same time, the energy industry is making enormous profits. They’re back up to above where they were before the pandemic started. So, they have taken advantage of that moment.”
This story has been updated with additional information.
Source: Read Full Article