They used water cannons for the first time on Sunday to disperse illegal rallies in the district,Tweeted the Global Times. When they tested the water cannon, they “fired water toward barricades and the open space without targeting protestors,” reads the Tweet.

According to the Hong Kong Free Press, the police force had purchased three Mercedes Benz trucks worth HK$27 million (roughly $34 million). After months of preparation, they deployed two cannon trucks, it reported.

It’s the latest development in the clash between protestors and police as pro-democracy protests in Hong Kong escalated into violence over the weekend, breaking nearly a two-week peaceful streak,reported Business Insider’s Ellen Cranley. 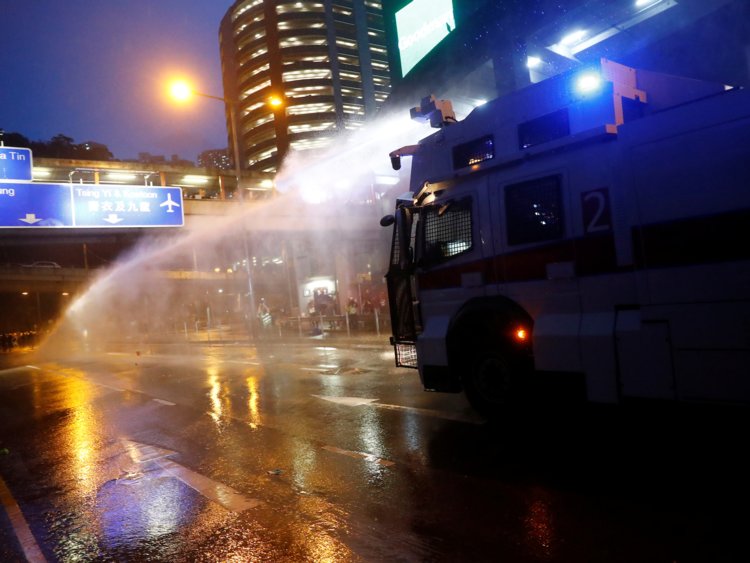 Riot police use water cannon during a protest in Tsuen Wan in Hong Kong.KAI PFAFFENBACH/Reuters

A peaceful march was planned to protest against government-installed “smart lampposts” that sparked concerns over state surveillance. The government in Hong Kong said smart lampposts only collect data on traffic, weather, and air quality,according to the Associated Press.

But protestors reportedly dismantled some poles with saws and ropes, shutting down streets and wielding slingshots, poles, iron bars, and bricks in a fight with police, Cranley wrote. On Saturday, police fired pepper spray and tear gas, breaking a10-day streak of no tear gas andadding to the 1,800 canisters police said they have fired in the clashes since the movement’s actions first emerged in June.

The protests began 12 weeks ago over a now-suspended bill that would have allowed the extradition of Hong Kong residents to China before widening to address free elections and independent investigations into alleged police brutality.

The smart lamppost protest is the most recent of several large-scale marches protestors have organized since protests began.