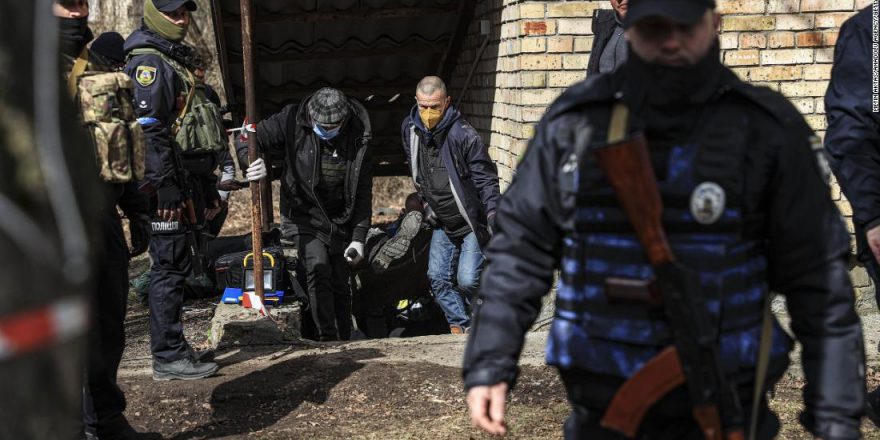 Growing horror over scenes of brutality in Kyiv suburbs

Lviv and Bucha, Ukraine (CNN)The Russian column of tanks and armored personnel carriers sped along a residential street in Bucha, a tree-lined suburb of the capital Kyiv. That was February 27th.

A short time later, that same line of vehicles lay in ruins, the wreckage smoldering, after being ambushed by Ukrainian forces.
There was no sign of the column’s soldiers. In a video showing the destruction, a man could be heard muttering: “I wish you all to burn in hell.”
But that Ukrainian victory was to be short-lived; a month-long occupation of Bucha by Russian forces followed.
The suburb’s name has this week become a byword for war crimes, after accounts of summary executions, brutality and indiscriminate shelling emerged in the wake of Russia’s hasty retreat, as the Kremlin shifts its focus away from the Ukrainian capital to the country’s east.

In recent days, Moscow has claimed — without evidence — that the atrocities in Bucha were staged — calling it “fake,” and part of a “planned media campaign.”
But witnesses who spoke to CNN said the carnage in the town began weeks ago.
And the devastation there bears similarities to Russia’s playbook in other towns and cities in Ukraine, where officials say civilian infrastructure has come under attack — with power supplies knocked out, water cut off and communications towers damaged — making it harder for local residents to hold out against Russian troops. But Ukraine has not surrendered.
There have also been reports of looting, disappearances, and evidence of the indiscriminate killings of civilians since the war began. 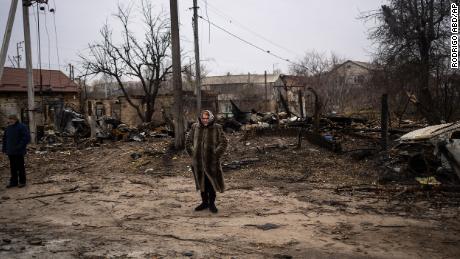 Horrors on the road

Bucha — once a magnet for young families due to its affordable homes, green spaces, and good schools — and other areas nearby, turned into a living nightmare in March as Russian troops stormed the region.
Residents there share difficult to verify stories of looted homes, senseless murders and failed escapes via Kyiv’s Zhytomyr highway — now a graveyard for wrecked tanks and burned-out cars.
In Bucha, pitch-roofed homes crumbled under the force of Russian artillery strikes.
Residents say they had no choice but to turn their vegetable patches and front yards into makeshift graves, since the presence of Russian forces made it impossible to reach the morgue or local cemetery. 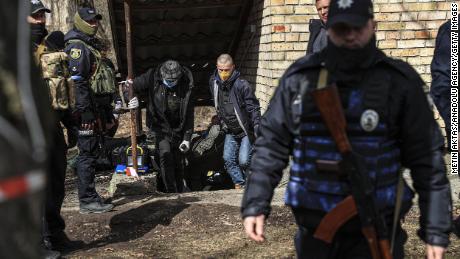 Anna Bilous, 48, had lived in Bucha for eight years before the Russian troops arrived. She sheltered in her home with her husband and two sons, but around March 4, when the electricity cut out and the pipes ran dry, it became clear they had to leave, she told CNN.
They decided that Bilous and her two sons would flee on foot, heading for the nearby suburb of Irpin on March 9, while her husband stayed behind to care for the family’s elderly neighbors.
The trio traveled on side roads to avoid the Russian soldiers, but when they turned onto Yablunska Street, the family was stunned to find dead bodies scattered across the road — including one lifeless man collapsed under a bicycle.
Bilous believes the man’s body remained there for close to a month, until he and some 20 other civilians were photographed for the world to see this past weekend. 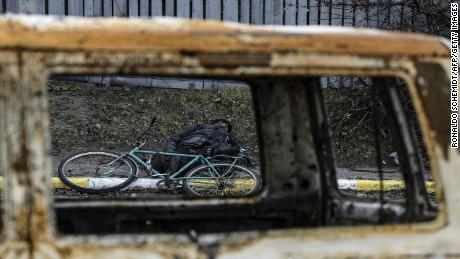 Bucha’s mayor has described their deaths as an execution.
Bilous’ account and satellite images captured on March 18, shared by Maxar Technologies, show that the bodies had lain in the street for weeks, since the town was under Russian control — Russia held Bucha until March 31.
On Tuesday, the Kremlin’s spokesman Dmitry Peskov continued to deny the accusations of brutal civilian killings in Bucha, saying the claims are not only “groundless, but are a well-staged tragic show” and “a forgery in order to try to denigrate the Russian army.”

About a mile away, at a sanatorium in Vokzal’na Street on Monday, Ukrainian officials ushered journalists into a cold basement where the contorted and bloodied bodies of five men lay in an advanced state of decay.
Some of those in this dimly-lit space had been kneecapped. Others, their arms bound behind their backs, had been shot multiple times. Bullet casings littered the ground.
Anton Gerashchenko, advisor to the Ukrainian interior minister, said it was a cruel display of torture and execution by Russian soldiers. CNN cannot independently verify his claim.
The men were killed sometime in the last three weeks, officials say. Their bodies are as yet unidentified, since no personal documents have been found.
In a statement, the Russian Ministry of Defense has denied anyone was harmed.
“Taking into account that the troops left the city on March 30, where was the footage for four days? Their absence only confirms the fake.” 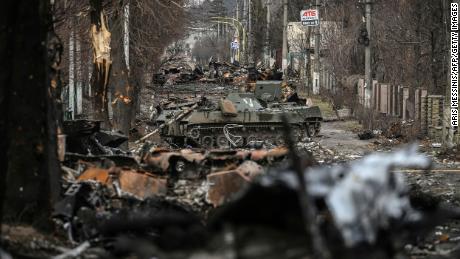 Officials say Russian forces bedded down in the sanatorium around the second week of March. Several foxholes, trenches, and positions for armored vehicles remain visible around the site; leftover Russian rations have been abandoned nearby.
Soldiers have daubed the exterior walls of the facility with the letter “V,” a symbol used by Russia’s Eastern Military District, and used synonymously with the letter “Z,” as an emblem for Russia’s “special military operation.”
The gruesome scene proved too much for Vladislav Minchenko, who vomited after volunteering to help remove the bodies from the basement on Monday.
“This is not what we learned in school,” said Minchenko, 44, who worked as a painter before the war. Holding up his hands, Minchenko told CNN the number of dead bodies he had dealt with since the start of the conflict numbered in the “hundreds — not dozens — hundreds.”

Shelling, live fire, and trigger-happy Russian soldiers made it too dangerous for those injured in the assault on Bucha to seek treatment at the local hospital in the center of town, according to residents.
The local morgue in Bucha ran out of space as deaths mounted in March; to deal with all the bodies, a tractor was brought in to dig a mass grave in the grounds of the Church of St. Andrew and Pyervozvannoho All Saints, its abbot, Andriy Galavin told CNN.
“There were too many dead people, and there was no way to properly bury them because getting to the cemetery was simply unrealistic because of the shelling,” Galavin said. 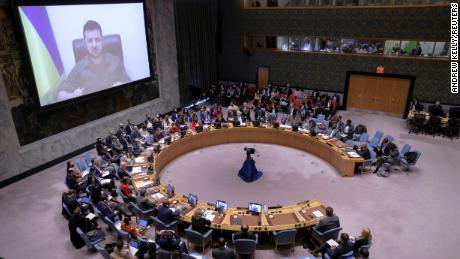 There was also a lack of resources, such as coffins, due to the main bridge connecting Bucha to Irpin being blown up at the start of the war, Galavin said.
As of this weekend, Kyiv Regional Police and residents believed the remains of at least 150 people had been laid to rest in the grave, but the mayor of Bucha said the death toll could be as high as 300. CNN could not independently verify those claims.
Galavin returned to Bucha last week once the town was liberated; he said the plan was to exhume the bodies, identify them via DNA analysis and hopefully provide some solace to relatives still searching for missing loved ones.

Tip of the iceberg

The devastation wrought in Bucha is just the tip of the iceberg, Ukrainian President Zelensky warned on Monday.
“In many villages of the liberated districts of the Kyiv, Chernihiv and Sumy regions, the occupiers did things that the locals had not seen even during the Nazi occupation 80 years ago,” President Zelensky said. “The occupiers will definitely bear responsibility for this.”
One grisly example of the callous indifference for human life was found in Motyzhyn, a village around 20 miles south of Bucha. The local mayor, Olga Sukhenko, was discovered half-buried in a ditch alongside members of her family. Ukrainian officials said Saturday that she was killed after being captured by Russian forces.
And, Ukraine’s Deputy Prime Minister Iryna Vereshchuk says that 11 local mayors are being held by the Russians, which CNN cannot verify.
“Unfortunately, so far, we have not been able to get in touch or to free any other city mayors and we don’t even know, we think that some of them were killed,” she told CNN, promising that the perpetrators would pay for their crimes against Ukraine.
“We will find them and kill them, and we will punish everyone who killed our city mayors, our journalists, our priests, our activists.”
As Ukrainian officials race to clear mines and booby traps left by retreating Russian troops, they fear civilian casualties may be much higher in Borodyanka, 14 miles west of Bucha. 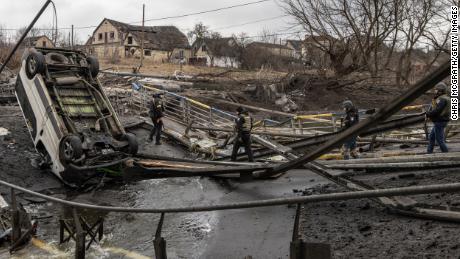 Oksana Kostychenko and her husband Oleksandr returned home to Borodyanka over the weekend after fleeing the area on February 27. They discovered that their house had been trashed and looted by Russian soldiers.
The couple also found a dead man in their backyard. His arms were tied behind his back, and his trousers had been pulled down.
“Alcohol is everywhere. Empty bottles in the hallway, under things,” Oksana said. “They smoked a lot, put out cigarettes on the table… They lived here as they wished.”
Anna Bilous and her sons made it out of Bucha on March 10. But the fate of the dead man they saw lying beneath a bicycle as they fled still haunts her.

“I feel like me and my sons could be in the same place as the man who died,” she said. “I feel the pain and sadness of all these lost people.”
Source: Read Full Article