London (CNN Business)With its succulent leaves and violet flowers, water hyacinth may look beautiful, but it is in fact deadly.

The invasive species, introduced to Africa from South America in the late 1800s, has wreaked havoc by clogging up lakes and waterways, destroying ecosystems and putting livelihoods at risk. Recent data on the plant’s economic impact is lacking but in Benin, an infestation during 1999 was found to reduce the annual income of 200,000 people by about $84 million.
That’s why Green Keeper Africa, a Benin startup founded in 2014, is trying to reduce the weed’s spread by ripping it out of waterways and using it to create a fibrous substance that can help mop up oil spills. 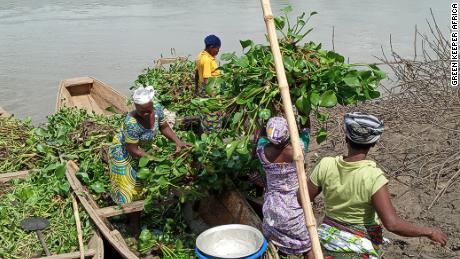 The company has two main goals, says Geneviève Yehounme, its commercial director. “First, to take out the plant from the environment. And second, to provide an absorbent that could be used to control industrial pollution,” she tells CNN Business.

The startup sources its water hyacinth from Lake Nokoué, in the southeast of the country, where the plant “is a real nuisance to local communities,” says Yehounme.
“People rely mostly on fishing, and that main activity is jeopardized because of water hyacinth,” she says. Thick mats of the weed impede access to fishing zones and block sunlight and oxygen from getting into the water, which depletes fish stocks.
The plant can exacerbate flooding during the rainy season, by preventing excess water from flowing into rivers and irrigation canals. It also encroaches on the mangrove forests in the area, endangering the rich and fragile ecosystem.
Green Keeper Africa harvests the hyacinth, dries the plant and breaks it down into a loose fiber marketed as GKSORB, that can be packed into bags, pillows and “socks.” The products are sold in emergency spill kits that can be kept on site or in a vehicle, and are able to soak up spills of up to 58 gallons (220 liters). 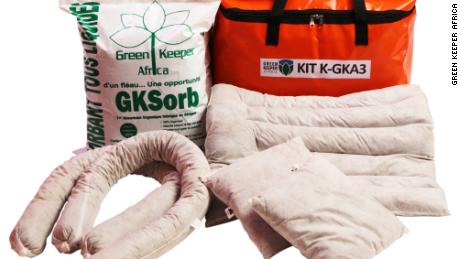 Oil and gas companies, such as Puma Energy Benin, buy the products, says Yehounme, adding that they provide an eco-friendly alternative to existing methods and work on both land and in water.
While large oil spills are usually cleaned up with methods such as booms, skimmers or vacuums, loose sorbents are useful for smaller spills especially on land, explains Miguel Patel, senior technical advisor for the International Tanker Owners Pollution Federation.
The most common type of sorbents used by oil firms are synthetic, he adds, but organic sorbents are beneficial because plastic-based fibers can harm wildlife.
Organic sorbents also produce less waste. Green Keeper Africa works with a partner to collect and dispose of the used product. Oil-soaked stacks are incinerated, with the energy produced used to power a local cement kiln.
“We don’t want them [clients] to go bury the waste, so we make sure that the loop is closed from raw material to the destruction of the waste,” says Yehounme.
But despite harvesting 3,900 tons of the plant each year, the startup only makes a minor dent in the water hyacinth problem. The aquatic weed reproduces so rapidly that a colony of plants can double its biomass in less than a fortnight.
Some scientists argue that finding commercial uses for the plant does not help to eradicate it.
“In our experience, utilization of an invasive plant has never contributed to its control,” Arne Witt, the regional coordinator for invasive species for the Center for Agriculture and Bioscience International, tells CNN Business.
In fact, it could even contribute to the weed’s spread as people will see it as something they could profit from, he warns.
“Our primary aim should be to try to remove as much of the plant as possible — any utilization should be secondary,” says Witt.

Yehounme argues that Green Keeper Africa helps local communities by removing the weed and creating jobs.
The company employs a network of more than 1,000 people from local villages to help harvest the plant, 80% of whom are women, says Yehoumne. 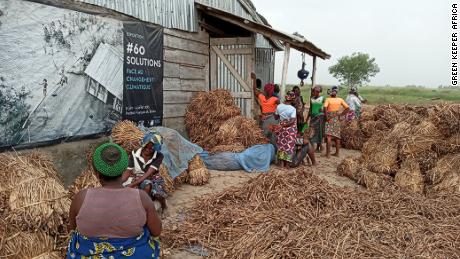 She hopes that as demand for the product grows, so will the company’s environmental and social impact.

Green Keeper Africa says it has raised more than $171,000 in funding and its average annual sales are around $90,000, but this is expected to rise as the company expands into other West African countries.
Expansion has been put on hold because of the pandemic, but the company plans to launch in Ghana and Cote d’Ivoire once business resumes.
Source: Read Full Article