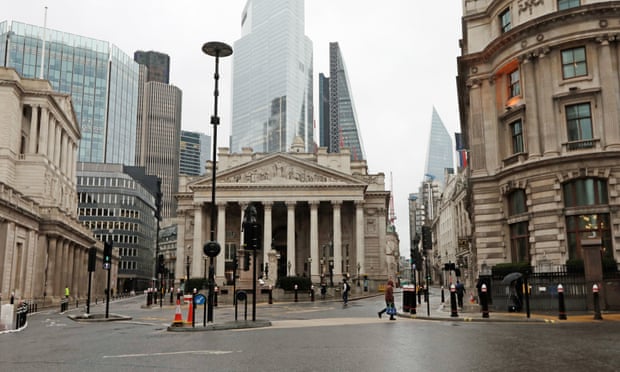 Shares in London have closed at their highest level since late February as investors ignored record Covid-19 deaths and warnings from a veteran City guru that an epic bubble of Wall Street crash proportions was bound to burst.

Stock markets around the world rose as optimism that mass vaccinations would ensure a rapid global economic recovery was strengthened by signs that the Democrats had won both vacant Senate seats in Georgia.

With Joe Biden due to be installed as US president this month, news that the Democrats would control both houses of Congress boosted hopes of a bigger-than-expected US stimulus package.

The FTSE 100 index closed 229.61 points higher at 6,841.86, after a rise of almost 3.5% that took it to within 800 points of its pre-crisis level. The rally was underpinned by a surge in oil prices, which made shares in energy companies more attractive, and by strong demand for shares in banks.

By the London close, HSBC had posted a gain of 10%, Standard Chartered had risen 9% and Barclays was up 8%. Shares in mining companies were higher, with Glencore up 8% and Anglo American rising 6%.

Saudi Arabia’s announcement that it was cutting crude production, coupled with a decline in US crude inventories, pushed the price of a barrel of Brent crude oil to almost $55 – its highest level since global financial markets were crashing in late February last year.

In early trading on Wall Street, the Dow Jones industrial average was up more than 500 points and was closing in on 31,000. The S&P 500 also hit a fresh high after a rising nearly 50 points in early trading.

There were smaller gains in the tech-heavy Nasdaq amid concerns that Biden would introduce tougher regulation on Silicon Valley.

“What investors are trying to figure out is how quickly the Democrats would be able to introduce their tax agenda if they take control of the Senate, and would they be more likely to act on regulation on big tech,” said Quincy Krosby, the chief market strategist at Prudential Financial in Newark, New Jersey.

The optimistic mood on stock markets came despite evidence that record infection rates in the US were leading to a slowdown in the jobs market, and hints from ministers in the UK that the lockdown announced this week could last until at least March.

Jeremy Grantham, the British co-founder of the US investment firm GMO, said in a letter to clients that current investor behaviour bore the hallmarks of the mood in the run-up to the 1929 Wall Street crash.

“The long, long bull market since 2009 has finally matured into a fully fledged epic bubble,” the 82-year-old financier said.

“Featuring extreme overvaluation, explosive price increases, frenzied issuance, and hysterically speculative investor behaviour, I believe this event will be recorded as one of the great bubbles of financial history, right along with the South Sea bubble, 1929, and 2000.”

Grantham, who is credited with calling the market peak in 2008, said the market posed great dangers for investors adding the US central bank, the US Federal Reserve, would be unable to prevent an eventual crash.

“These great bubbles are where fortunes are made and lost – and where investors truly prove their mettle. For positioning a portfolio to avoid the worst pain of a major bubble breaking is likely the most difficult part,” he said.

“Every career incentive in the industry and every fault of individual human psychology will work toward sucking investors in. But this bubble will burst in due time, no matter how hard the Fed tries to support it, with consequent damaging effects on the economy and on portfolios.”

Grantham cited shares in the electric car maker as an example of the market bubble. “As a model 3 owner, my personal favourite Tesla tidbit is that its market capitalisation, now over $600bn, amounts to over $1.25m per car sold each year versus $9,000 per car for General Motors. What has 1929 got to equal that?”