Home » Business » From the Rockettes to Broadway, Covid cases are shutting down live performances 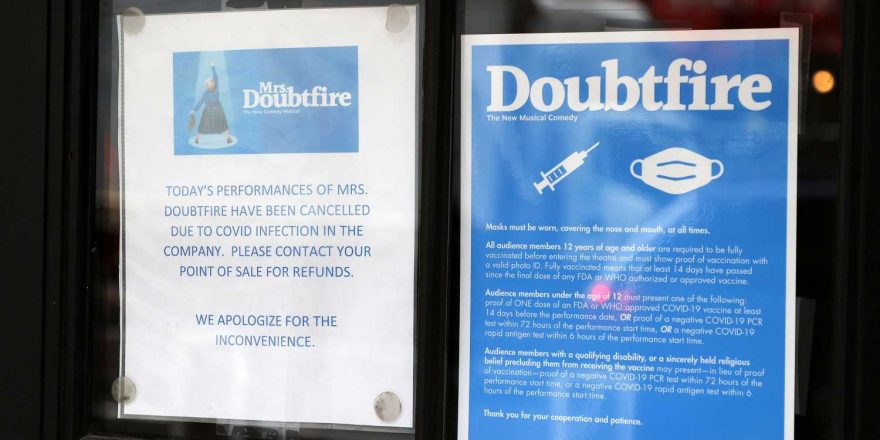 From the Rockettes to Broadway, Covid cases are shutting down live performances

Visitors to New York City on Friday can check out the famous Christmas tree at Rockefeller Center, but they won't be able to walk down the block and see Radio City Musical Hall's "Christmas Specatular."

The Rockettes have been sidelined by an outbreak of Covid-19.

It's been a hard week for live performances. Show after show on Broadway has been canceled as variants of the coronavirus fuel a new surge in Covid cases in the city.

With just a week before Christmas Eve, all four performances of Radio City's Christmas show were canceled. "Moulin Rouge! The Musical" nixed its Thursday night performance while audiences were already in their seats after a company member tested positive late in the day.

Productions have been starting and stopping since the theater industry reopened in the Big Apple in September. "Aladdin," "Chicken & Biscuits," "Chicago" and "Wicked" as well as"Harry Potter and the Cursed Child" have been forced to cancel performances or shutdown for small stretches because of breakthrough cases.

These incidents have been more frequent in recent weeks, however, as the omicron variant has led to an increase in cases, even among those who are fully vaccinated.

On Wednesday, "Tina," a jukebox musical about legendary singer Tina Turner, canceled both of its performances, "Harry Potter and the Cursed Child" called off its matinee and "Hamilton" scratched its evening performance.

"Mrs. Doubtfire," a new musical adaptation of the beloved film, had previously canceled four performances between Sunday and Wednesday. Additionally, "Freestyle Love Supreme" canceled three, "Ain't Too Proud' scrapped one and the off-Broadway "Little Shop of Horrors" revival had to abandon four.

Broadway has taken precautions to ensure that its workers and its audiences are vaccinated and patrons are required to wear masks during performances. In many cases, those that have tested positive have been asymptomatic or only shown mild symptoms. But, they are not allowed to return until they are considered no longer contagious. In some instances, productions have been able to continue even if a cast member tests positives because they have understudies or swing players.

While audiences have largely been understanding of these cancellations, these disruptions are costly to productions, especially those that are just getting started. While shows with major followings are anchors in the Broadway community and will be able to rebound, the newer productions face steeper challenges.

"Chicken & Biscuits," a comedy about a family that reunited for a funeral, closed permanently at the end of November.

Not to mention, while ticket holders in New York's tri-state area can easily rebook tickets, those coming from out of town may not. In a typical year, tourists account for 65% of Broadway ticket sales. This visitors also spend additional money on transportation, food and hotels. Frequent cancellations, especially during the peak holiday season, could deter these travelers from scooping up tickets for fear that the performance will get called off before curtain time.