Home » Business » From coming out at work to blazing a trail through outer space: How 6 CEOs transformed their careers and lives 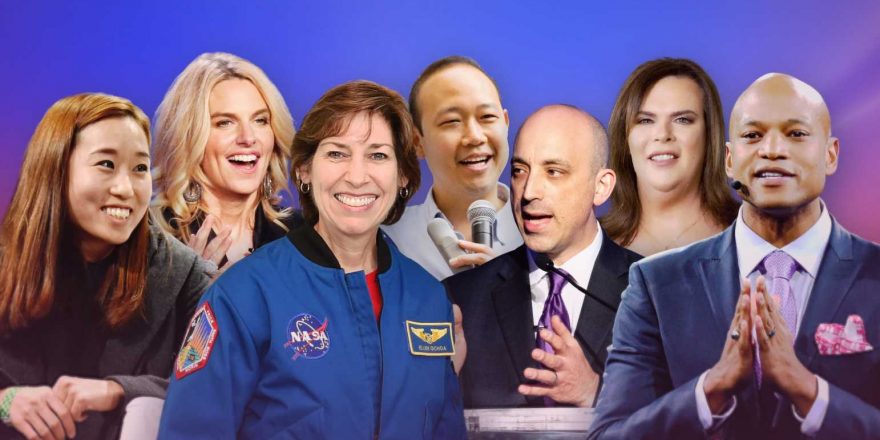 From coming out at work to blazing a trail through outer space: How 6 CEOs transformed their careers and lives

This story is part of the Behind the Desk series, where CNBC Make It gets personal with successful business executives to find out everything from how they got to where they are to what makes them get out of bed in the morning to their daily routines.

From billionaire investor Ray Dalio to former General Electric CEO Jeff Immelt, some of the country's most high-profile executives chose 2021 as the year to open up.

This year, CNBC Make It got personal with more than 30 CEOs about their lives, careers, mistakes, leadership styles and of course, Covid. They discussed their secrets to success — and how they struggle with everyday problems, too.

Some fought through childhood poverty and addiction. Others struggled with their sexuality or endured years of failure and regrets. All of them shared one particular strength: Throughout their challenges, they never stopped pushing toward their goals, whether personal or professional.

Here are CNBC Make It's six most powerful CEO stories of 2021, and what you can learn from them:

Wynne Nowland, CEO of insurance brokerage Bradley & Parker, on coming out as transgender: ‘I’m much more at peace with myself’

For nearly 30 years, Wynne Nowland buried herself in work to avoid dealing with her two personas: At work, she was Wayne, but inside, she was Wynne.

Career-wise, her strategy was fruitful: In 2017, she became the CEO of her medium-sized insurance firm in Melville, New York. But internally, she was hitting a breaking point.

So, a few weeks before her 56th birthday and about four months after her promotion, she sent a company-wide email to her 70-person staff. "I plan to begin working as Wynne starting this morning," she wrote in the email.

In March, Nowland told CNBC Make It that she feels more at ease at work, and much more at peace with herself. She also said she's been greeted with open arms from colleagues, clients and board members.

Her advice: "Once you have come to the conclusion that this is who you are … don't delay."

Ellen Ochoa, the first Hispanic woman in space, on dealing with 'people who didn't think I should be there'

Ellen Ochoa may not be a household name, but perhaps she should be: In 1993, Ochoa became the first Hispanic woman in space. Twenty years later, she became the NASA Johnson Space Center's first ever Hispanic director.

It wasn't an easy ride for Ochoa, especially as a Hispanic woman in the '90s. She faced discouragement as early as college, while studying electrical engineering at San Diego State University. Through graduate school and her early career, she encountered people who "didn't think I should be there."

In September, Ochoa told CNBC Make It that instead of listening to the naysayers, she doubled down on fighting workplace discrimination.

Her advice: "You don't want to listen to discouragement from people that don't know you. That's really telling you more about them. It doesn't say anything about you or your talents, interests or passions."

Wes Moore, former CEO of the Robin Hood Foundation, on being guided by faith, not fear

Wes Moore's neighborhood in the Bronx, New York, was one of the first ones supported by the Robin Hood Foundation, now one of the largest anti-poverty nonprofits in the nation.

During his childhood in the 1980s, his widowed mother worked several jobs to send him to military school. Moore went on to become a White House fellow to former U.S. Secretary of State Condoleezza Rice and an investment banker at Deutsche Bank and Citibank.

And in 2017, he became the Robin Hood Foundation's CEO — despite being unsure of the move at the time. "I actually didn't realize how deep the Robin Hood connection was to my own personal journey story until I got to Robin Hood," Moore told CNBC Make It in February.

For Moore, addressing poverty partially involves reframing "charity work" as a way to foster positive social change. "I actually think a 'charity' can oftentimes come up as paternalistic and inaccurate," he said.

In May, he left Robin Hood — and according to his LinkedIn page, launched a campaign for the governorship of Maryland the following month.

His advice: Change organizations should not be run with a sense of sympathy, but rather a sense of empathy "where we understand that other people's pain should be ours."

Sarah Kate Ellis, CEO of GLAAD, on why she delayed coming out at work: 'There were no lesbians who had big careers'

As the president and CEO of GLAAD, Sarah Kate Ellis is a loud advocate of LGBTQ+ rights. But she wasn't always that way: As a magazine executive in the late 1990s and early 2000s, she was quiet about her own sexuality.

Ellis said she delayed coming out as lesbian for years. Over time, the agony of hiding herself and lying to others became too much. One day at work, she blurted out that she had a girlfriend — and after that, she said, her career took off.

"I was bringing all of me to my work and not hiding any part," she said. "It takes a lot of brain capacity to hide who you are."

Her advice: "I befriended people. I wanted people to like me. I know the power of meeting people and knowing people and empathy. If people knew me, they couldn't hate me when they found out I was gay."

Dawoon Kang, co-founder of dating app Coffee Meets Bagel, on how being an immigrant shaped her identity

Today, Dawoon Kang is the founder of the multimillion-dollar dating app Coffee Meets Bagel — and she may never have gotten there without being an immigrant first.

At age 12, Kang emigrated from Korea to the U.S. with her two sisters, while her parents stayed behind to run their business. The siblings lived with a family friend, learning English to acclimate.

It was challenging. In May, Kang told CNBC Make It that she was simply quiet for a long time, fearful of making grammatical mistakes. Her turning point came when she realized that mistakes were OK for anyone to make.

"If you believe [mistakes matter], then it's going to become an obstacle to whatever you want to do," she said.

Eventually, she ended up working at JPMorgan — and when one of her sisters graduated from Harvard Business School with a passion to start a company, she couldn't resist the entrepreneurial urge. She quit her job in 2011, and the two siblings co-founded Coffee Meets Bagel.

"I knew immediately, instinctively, that I would [regret it] if I didn't actually take the time to try this," she said.

Her advice: "Everything comes together in the end, even if you didn't really plan for it, which is why I think it's important to just follow your gut. See what kind of things draw you in, because you just never know how it's going to play out."

Jonathan Greenblatt, CEO of the Anti-Defamation League, on ending hate: You have to 'change hearts and minds'

Jonathan Greenblatt's hands have been pretty full over the past few years: He's the CEO and national director of the Anti-Defamation League (ADL), the world's oldest anti-hate nonprofit organization and one of the longest-standing civil rights groups in the U.S.

Earlier this year, an ADL report showed that hate crimes have skyrocketed in the U.S. over the last four years, doubling in 2020 compared to the previous year. Last year, the country averaged more than 14 incidents per day, according to the report.

But in March, Greenblatt told CNBC Make It that he's learned you can't legislate or arrest people to fight hate. Instead, he said, you can use education to change people's "hearts and minds."

Greenblatt said his passion for helping others came from his grandfather, a Holocaust survivor who eventually settled down in Bridgeport, Connecticut: "His experience of having lived through the worst of the worst and yet having hope really formed my point of view."

His advice: Take calculated risks. "It's not about jumping into a lake and you don't know how deep it is. It's about being smart about the risks that you take," he said. "I would encourage people to get out of their comfort zones."

Don't miss more from Behind the Desk:

Co-founder of $1.6 billion brand Skims: ‘I have a rule — you have to do things that scare you’

Why SoulCycle’s CEO accepted the job on the heels of a company controversy: ‘I’m not afraid of a challenge’

Designer Vera Wang on starting her company at 40: 'I thought maybe it's just too late for me'

A-Rod Corp CEO Alex Rodriguez on his life and career: 'It's an imperfect story'