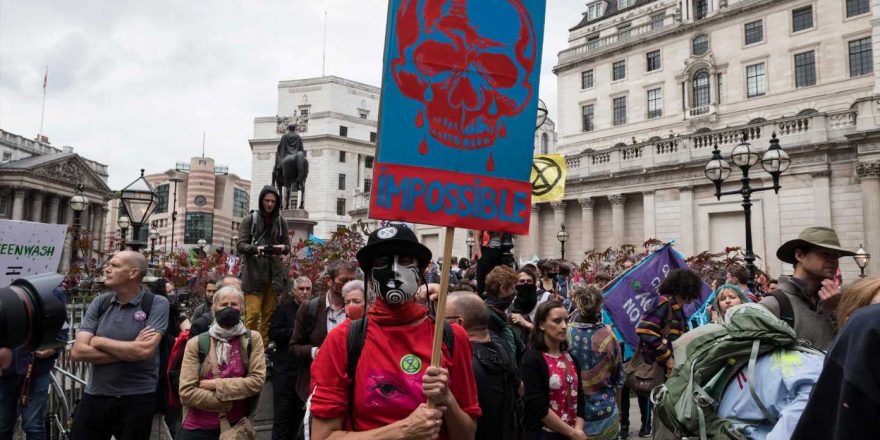 GLASGOW, Scotland — Flagship pledges at the COP26 climate summit designed to rewire the global financial system for net zero are "resolutely ignoring" the elephant in the room that is fossil fuels, campaigners and climate activists have warned.

A host of finance announcements are expected at U.N.-brokered climate talks on Wednesday, billed as "Finance Day," with financial firms seeking to align global assets to the landmark Paris Agreement for the first time.

The U.K. is presiding over the major climate event in Glasgow, Scotland, from Oct. 31 through to Nov. 12. The summit is widely regarded as humanity's last and best chance to prevent the worst impacts of global heating.

The private finance pledges on the table have been criticized, however, for failing to both prevent financial firms from making investments in fossil fuels and to enact reductions of absolute emissions.

U.K. Finance Minister Rishi Sunak told assembled delegates on Wednesday that the delayed summit had brought together institutions with assets worth over $130 trillion. He said financial firms controlling 40% of global assets would align themselves to the Paris Agreement's 1.5 degrees Celsius limit for global heating.

This represents a "historic wall of capital for the net zero transition around the world," Sunak said. "Six years ago, Paris set the ambition, today in Glasgow we are providing the investment we need to deliver that ambition."

'Our job is to find the plumbing to make it work'

Among the pledges to be announced on Wednesday, former Bank of England Governor Mark Carney outlined the goals of the U.N.'s Glasgow Financial Alliance for Net Zero, or GFANZ.

Chaired by Carney, this global coalition of leading financial institutions is seeking to accelerate the transition to a low-carbon economy.

"Finance is becoming a window through which ambitious climate action can deliver a sustainable future that people all over the world are demanding," Carney said, hailing the rapid increase in the amount of money being managed with net-zero targets. He said this had increased from $2 trillion a few years ago to $130 trillion today.

"With GFANZ, we have all the money needed for the transition. Our job is to find the plumbing to make it work," Carney said.

However, analysts at NGO Reclaim Finance said the collation of financial companies signed up to GFANZ was "missing the point" on fossil fuels. This is because, the analysts said, GFANZ had failed to mandate a halt to investments in fossil fuel expansion — a red line drawn by the International Energy Agency if global heating is to stay under 1.5 degrees Celsius.

"An alliance on climate with no fossil fuel criteria in its guidelines is like an anti-smoking coalition which doesn't address cigarettes," Bill McKibben, author and co-founder of the grassroots climate campaign 350.org, said in a statement.

"For as long as the financial sector fails to heed the IEA's call to end support for new oil, gas and coal projects, its claims to climate leadership should be laughed out of the room."

Earlier this week, GFANZ announced a number of new commitments, including "processes for removing members where necessary" and "accelerating the phase-out of fossil fuels in line with the science."

Patrick McCully, senior analyst at Reclaim Finance, said that it is "encouraging" to see the group embrace the need for sanctions processes and an accelerated fossil fuel phase-out. "The net zero alliances must now incorporate robust requirements on 1.5°C-aligned fossil fuel phase outs into their criteria for financial institutions. Until this happens, the jury will still be out on GFANZ and its efficacy," he added.

Burning fossil fuels, such as coal, oil and gas, is the chief driver of the climate crisis. Yet, despite a flurry of net-zero emission goals and increased pledges of many countries, some of the largest oil, gas and coal producers have failed to outline how they plan to drastically scale down fossil fuel use.

The 2015 Paris climate accord says financial flows "should be consistent with a pathway towards low greenhouse gas emissions and climate resilient development."

Focus on quality of pledges, 'not just their quantity'

Ben Caldecott, director of the Oxford Sustainable Finance Group at the University of Oxford, said COP26 has seen "unprecedented commitments" from financial institutions to align their portfolios, products and services with the Paris Agreement.

However, "part of this entails halting the financing of new fossil fuel infrastructure," he continued. "You can't deliver Paris without this happening as soon as possible, and no amount of new green investment can offset this requirement."

Caldecott said it would be imperative to focus on the quality of the finance commitments made at COP26, "not just their quantity."

Kenneth Haar, researcher at campaign group Corporate Europe Observatory, said "self-regulation" among companies with a heavy carbon footprint was at the heart of the private finance proposals on the table at COP26.

As a result, proposals from the Net Zero Banking Alliance, Taskforce for Climate-Related Financial Disclosures, the Investment Association and GFANZ were all likely to fall short on the reforms necessary.