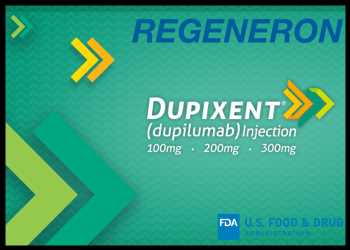 It is the first FDA approval to treat EoE in adults and pediatric patients 12 years and older weighing at least 40 kilograms.

EoE is a chronic inflammatory disorder in which eosinophils, a type of white blood cell, are found in the tissue of the esophagus. Common symptoms in adults and adolescent patients with EoE include difficulty swallowing, difficulty eating, and food getting stuck in the esophagus.

Dupixent is a monoclonal antibody that acts to inhibit part of the inflammatory pathway.

The FDA decision follows a randomized, double-blind, parallel-group, multicenter, placebo-controlled trial, which studied the efficacy and safety of Dupixent in EoE.

The trial included two 24-week treatment periods, Part A and Part B, which were conducted independently in separate groups of patients. In Part A and Part B, patients received either placebo or 300 milligrams of Dupixent every week.

The agency noted that the most common side effects associated with Dupixent include injection site reactions, upper respiratory tract infections, joint pain, and herpes viral infections.

The drug is approved for the treatment of moderate-to-severe atopic dermatitis in adult and pediatric patients aged 6 and older whose disease is not adequately controlled by topical prescription therapies or when those therapies are not advisable.