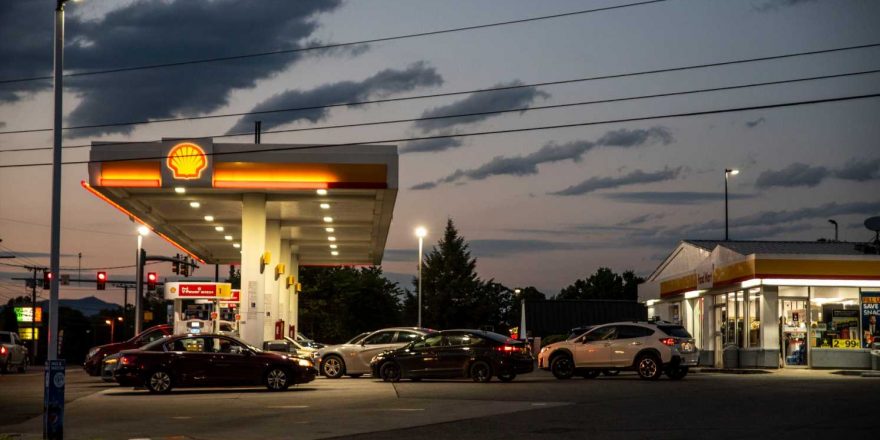 The claim: Colonial Pipeline hack proves election infrastructure could have been hacked

Communities along the East Coast continue to face gas shortages after the Colonial Pipeline Co. fell victim to a cybersecurity attack.

Other accounts posted memes with the same claim. Examples of those posts are visible here and here.

These posts draw a misleading comparison between the Colonial Pipeline hack and unfounded allegations about hacked voting systems in the November 2020 election. Investigations around election infrastructure have repeatedly found no evidence of such interference in November.

USA TODAY reached out to the posters for comment.

Caution tape is wrapped around fuel pumps at an Exxon Gas Station on Boonsboro Road in Lynchburg, Va., May 11, 2021. More than 1,000 gas stations in the Southeast reported running out of fuel, primarily because of what analysts say is unwarranted panic-buying among drivers, as the shutdown of a major pipeline by hackers entered its fifth day. In response, Virginia Gov. Ralph Northam declared a state of emergency. (Photo: Kendall Warner, The News & Advance via AP)

Colonial Pipeline IT was hacked

When Colonial Pipeline announced it had been hacked on May 7, the company said a ransomware attack affected its information technology systems.

Ransomware attacks are cybercrimes that typically involve hackers encrypting important data, making it inaccessible until the target pays a high ransom in digital currency. These cyberattacks usually target corporations, but several hospitals have been victimized by ransomware attacks over the past year as well.

“In response to the cybersecurity attack on our system, we proactively took certain systems offline to contain the threat, which temporarily halted all pipeline operations, and affected some of our IT systems,” the company wrote in a May 10 statement. “To restore service, we must work to ensure that each of these systems can be brought back online safely.”

Colonial Pipeline Company in Linden, N.J., a major pipeline that transports fuels along the East Coast, says it had to stop operations because it was the victim of a cyberattack. Colonial Pipeline said in a statement late Friday that it "took certain systems offline to contain the threat, which has temporarily halted all pipeline operations, and affected some of our IT systems." (Photo: Mark Lennihan, AP)

An FBI investigation found software from the cybercrime group DarkSide, which has been under investigation since October, was responsible for the attack. DarkSide typically develops and sells ransomware software that other criminals use to carry out attacks, CNBC reported.

Several company statements have detailed Colonial’s efforts to manually operate some lateral pipelines during the outage.

Posts connecting the pipeline hack to voting machines build on the widespread — and baseless — claims of fraud from the 2020 election.

An expert from the nonprofit Center for Democracy & Technology told USA TODAY this connection is misleading.

“The Colonial Pipeline attack does not, in any way, indicate that U.S. voting systems are vulnerable on a large scale, ” wrote Will Adler, senior technologist for elections and democracy at CDT.

Adler described several security measures election officials take to prevent hacking and emphasized that “dozens of audits, recounts and investigations across the country” revealed no evidence elections results were impacted by a cyberattack.

“Election officials do a great job of insulating voting systems from the internet,” he wrote. “Moreover, elections are highly decentralized, with thousands of jurisdictions managing elections across the country. All of that means that there is no easy central point of attack that would allow a potential cyber attacker to disrupt an election or manipulate results.”

A woman cleans computers to test them during the last day of a voting machines audit at a warehouse of the National Electoral Council in Caracas, Venezuela, Sunday, Nov. 29, 2020. Venezuelans will vote in midterm elections on Dec. 6. (Photo: Matias Delacroix, AP)

To avoid ransomware hacks like the one Colonial Pipeline experiences, Adler said election officials take many precautions, including backing up sensitive data like voter registration databases.

Allegations of an election infrastructure hack are baseless

The election fraud claims are not only not comparable to the pipeline hack, they’re simply wrong.

In November, a national coalition made up of the Department of Homeland Security’s Cybersecurity and Infrastructure Security Agency and the National Association of State Election Directors said the 2020 election was “the most secure in American history.”

“There is no evidence that any voting system deleted or lost votes, changed votes, or was in any way compromised,” the coalition announced.

Dominion Voting Systems, the election technology company at the center of most of these claims, has repeatedly held the fraud claims are false.

In this Sept. 16, 2019, file photo, a Dominion Voting Systems voting machine is seen in Atlanta. Dominion Voting Systems is filing a $1.6 billion defamation lawsuit against Fox News, arguing the cable news giant falsely claimed in an effort to boost faltering ratings that the voting company rigged the 2020 election, according to a copy of the lawsuit. (Photo: John Bazemore, AP)