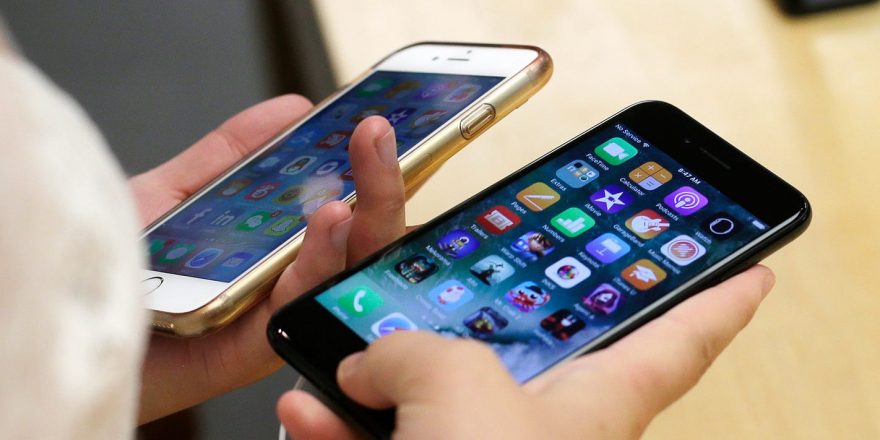 The claim: iPhones take pictures of your face every few seconds

Some social media users are drawing attention to Apple’s facial recognition technology by sharing videos that claim the technology giant is secretly monitoring people who use its devices.

“Just found out iPhones take front camera pictures of your face every 3-5 seconds,” reads text over a black-and-white May 22 TikTok video. The clip was shared to Instagram on May 25.

The video, which has more than 18,000 views on Instagram, shows two people sitting outside and using their iPhones as a bright light flashes at their face every few seconds. Users in the comments claimed the video is evidence that “both cameras are taped.”

On May 19, an Instagram user posted a similar TikTok video with more than 290,000 likes. The clip shows a woman using infrared mode on a digital camera to capture repeated flashes radiating from an iPhone.

A caption above the video reads, “TikTok User Proves That iPhone is Taking ‘Invisible’ Photos of Users With An Infrared Camera.”

It’s true that some iPhones give off an infrared light every few seconds. But the reason behind it is not what the social media posts suggest.

USA TODAY reached out to social media users who shared the claim for comment.

Apple spokesman Alex Kirschner told USA TODAY the videos online show the company’s TrueDepth camera technology, which is used to check if you are or aren’t using the device.

“What is being claimed on social media is not accurate and this has to do with the TrueDepth camera enabling Attention Aware Features,” he said via email, pointing to a support document on Apple’s Face ID advanced technology.

If a more budget-friendly iPhone X follow-up really is on the horizon, Apple could nix Face ID in order to reduce production costs—provided it was willing to reintroduce a fingerprint scanner of some sort. (Photo: Reviewed.com / Michael Desjardin)

Apple’s site states the TrueDepth camera captures face data by projecting and analyzing more than 30,000 invisible dots to create a map of your face while also taking an infrared image.

This enables attention awareness features, which include dimming the screen brightness, lowering the volume of alerts or turning off the screen when the device isn’t being used.

Screen Rant, an infotainment website, points out that Amazon Alexa, Google Assistant and Siri all use similar awareness-related technology by regularly listening for voice commands.

It is also worth noting that the TrueDepth camera feature can be removed by switching off Attention Aware Features under the Face ID & Passcode settings of the phone, according to Apple.

The company says it has privacy protections in place to fend off hackers from accessing your iPhone with your facial data. Apple says the probability of this happening is approximately 1 in 1 million per “enrolled appearance,” or face, in a device.

Nothing on the company’s site states the photos are captured and stored in a database. Apple writes: “Face ID data doesn’t leave your device and is never backed up to iCloud or anywhere else.”

The infrared light seen in the video is invisible to the human eye. However, when it is viewed through certain technology — such as the infrared setting on a camera used by the TikTok user — the light output becomes noticeable.

Infrared is a region of the electromagnetic radiation spectrum where wavelengths are longer than those of visible light but are shorter than radio waves, according to TechTarget.

Apple’s page notes some cameras detect the infrared light emitted from the iPhone. It can also be viewed in a dark room, which Apple says is “expected in extremely dark settings.” The company also says the infrared emitters do not cause any harm to the eyes or skin “due to its low output.”

Fact check: Medical microchip developed by Columbia University has nothing to do with vaccines

Infrared light is also used for other purposes, including night vision, thermography, tracking technology, meteorology, art history and heat. Infrared technology has been used during the coronavirus pandemic to detect fevers in public places, CNBC reported.

The claim that iPhones take pictures of your face every few seconds is MISSING CONTEXT, based on our research, because without additional information it could be misleading. It’s true that some Apple devices regularly scan your face to check if you are looking at the screen, however, the videos fail to mention the purpose of the flashes.  The infrared flashes are used to analyze movement, which allows the device to automatically lower the brightness or volume when it is not being actively used, or to unlock the phone for the device’s owner.