Home » Business » Explained: Why the monsoon is pulling out so late

Explained: Why the monsoon is pulling out so late

‘The last time we had such a late withdrawal of monsoon was in 1960 or so.’

It is expected that the south-west monsoon would finally bid goodbye in a few days’ time.

Though both the Indian meteorological department and Skymet predicted a ‘near normal’ and ‘below normal’ monsoon, August and September saw the monsoon at its fiercest. India had an ‘above normal’ monsoon at 110% Long Period Average (LPA).

What’s the reason behind the unusual pattern of the south-west monsoon?

“Usually, the monsoon has a tendency to take a break in between. It did not happen this time. After a deficit June, it intensified its intensity, and what we saw in the month of September has not happened in the last 100 years!” G P Sharma, below, president, meteorology, Skymet, tells Rediff.com‘s Shobha Warrier.

Yes, in April, we had predicted a 93% monsoon. IMD had said it would be 96%. What happened finally was we got the first excess monsoon in the last 25 years.

Normally, we revise our prediction, but this time, we did not. It turned out to be much, much above what was forecast by us and IMD.

When we spoke in May, you said we would have deficient monsoon in the first half and good monsoon in the second half, but what we saw was unprecedented…

Was the Indian Ocean Dipole (also known as the Indian Niño, an irregular oscillation of sea-surface temperatures in which the western Indian Ocean becomes alternately warmer and then colder than the eastern part of the ocean) absorbing the El Nino effect, a reason for the excess rain in September?

IOD is in the Indian Ocean and El Nino, in the Pacific Ocean. They are not connected, but they do complement the monsoon rains and also act sometimes in tandem.

IOD always has a positive effect and always enhances the rainfall. But on the other hand, El Nino reduces the rainfall. So, when they are together, sometimes, it negates the effects of El Nino.

But this time, though El Nino was expected to devolve as the monsoon proceeded, it nearly collapsed after June. Then, IOD kept on growing.

The prediction was that it would be a normal IOD which meant it was not a spoilsport, but it was expected to grow positively in the second half of the season. Throughout the season and even now, IOD has been very strong.
Is that the season why the south-west monsoon is not withdrawing even though it is October?

Continuation of the monsoon may not be directly linked with IOD, but then, the excess rainfall is surely is due to the persistence of strong IOD in the Indian Ocean.

Then the question is: Why did the monsoon extend for so long?

Earlier also, when we had strong IOD, the monsoon withdrew on time. The last time we had such a late withdrawal of monsoon was in 1960 or so. This time, we are not going to see a withdrawal before October 10.

What is the reason for the late withdrawal of the south-west monsoon?

Every phenomenon is linked one to the next to the next. Nobody anticipated the excess rainfall or a late withdrawal.

In 2013, the monsoon withdrawal started on September 16, but it stopped in between and the final withdrawal from Delhi was on October 16. It took one month for its complete withdrawal.

This time, I expect the complete withdrawal by October 13-15.

If you look at the monsoon trough pattern this time, it was never in its normal position. Normally the trough runs from Ganga Nagar across Haryana, UP and then goes to the Bay of Bengal.

It caused heavy rainfall, particularly in the second half over the central parts of India which include Chhattisgarh, MP, Maharashtra and Gujarat.

Remember, these are generally the deficit states. This time also, there was a deficit earlier, but the last 10 days of rainfall in September made up for the deficit.

Bihar was never in the good rainfall bracket; it was always in the deficit. 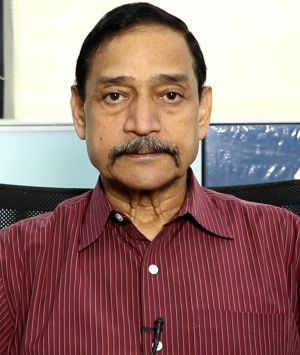 And the perennially drought-stricken parts in Maharashtra got excess rainfall this time.

Because the trough line changed, Haryana, Punjab, East UP and Delhi got highly deficit rainfall. All the three hills — Jammu, Kashmir, Uttaranchal and Himachal — got rainfall less than the normal. Because the trough is in the south of its position, the hills got affected.

Basically, the monsoon current is quite weak in the northern hills. It is only the western disturbances which along with the monsoon trough causes rainfall activity in the hills. That’s why the hills and the plains got deficit rains.

Is it unusual to have excess rainfall in the second half of the south-west monsoon like we had this year?

It is quite unusual. This time, after a highly deficit June, it became progressively more in the next three months. It was 5% more in July, 15% more in August and 53% more in September.

So, the monsoon performed better and better in the last three months which is a bit unusual.

Usually, the monsoon has a tendency to take a break in between. It did not happen this time. After a deficit June, it intensified its intensity, and what we saw in the month of September has not happened in the last 100 years!

There were floods in more than 13 states during the second half of the monsoon. It was reported that in 1917 when we had more rain, there were no floods. Does it not mean that it was not excess rainfall but poor planning of the cities that caused the floods?

They were talking about 1917. It is 2019 now. The landscape has changed completely and we are responsible for it. You call it development and in the name of development, you destroy nature.

So, we cannot blame excess rains for the floods?

No way. We are responsible for all the floods. They are all man-made floods, not natural.

Floods were there in the past also, but it has worsened possibly because of the lopsided development we have had.

All the rivers need desilting as their water carrying capacity has reduced. The water table is going down while our water usage is going up. It is a vicious cycle.

Will the delay of the withdrawal of the south-west monsoon have any impact on the onset of the north-east monsoon?

No. There is no linkage between the withdrawal of the south-west monsoon and the arrival of the north-east monsoon.

Once the south-west monsoon retreats up to 15 degree north somewhere close to Goa on the west coast and Machilipatnam on the east coast, it is time for the onset of the north-east monsoon. There cannot be an overlap of both the monsoons.

So, the withdrawal has to be complete for the north-east monsoon to formally arrive.

Though it is too early to say, I will say the conditions are favourable for a timely onset of the north-east monsoon.