Home » Everybody gets a vaccine! 💉 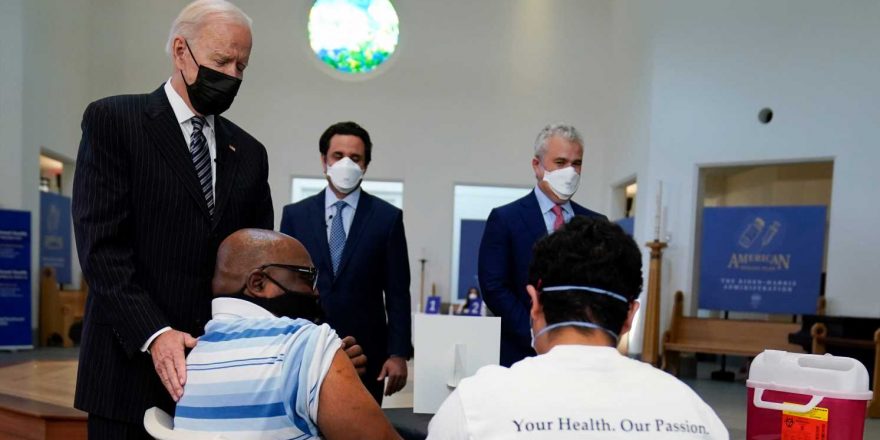 Everybody gets a vaccine! 💉

President Joe Biden announced that 100% of adults will be eligible for a vaccine by April 19. Congressman Alcee Hastings and Tony-nominated actor Paul Ritter have died. And the murder trial of Derek Chauvin continues.

👋 It’s Laura. Time to catch up on Tuesday’s news.

But first, better check the ketchup levels in your junk drawer condiment stash. The latest trend in COVID-19 shortages is — yes, ketchup packets. 🙀

Everybody gets a vaccine! 💉

Ready to get jabbed? Biden announced Tuesday that he is moving up his deadline to April 19 for all states to make all U.S. adults eligible for a coronavirus vaccine — two weeks sooner than his initial goal of May 1. White House press secretary Jen Psaki said Biden wants to eliminate any confusion for Americans about eligibility. “That doesn’t mean they will get it that day,” Psaki said. “It means they can join the line.” Which means the line is about to get much longer. So the administration is also sending a message to seniors — who are one of the most vulnerable populations — to get their shots now if they haven’t already.

📈 Today’s numbers: The U.S. has had more than 30.7 million confirmed coronavirus cases and 555,000 deaths, according to Johns Hopkins University data. At least 207 million vaccine doses have been distributed in the U.S. and 167 million have been administered, according to the CDC.

McConnell to CEOs: ‘Stay out of politics’

After a week of increasing Republican backlash to the mounting criticism of a recent voting law passed in Georgia, Senate Minority Leader Mitch McConnell denounced the opposition corporations and sports associations have expressed, saying, “My advice to the corporate CEOs of America is to stay out of politics. Don’t pick sides in these big fights.” While proponents of the law argue the changes were necessary to ensure election security, voting rights advocates argue the law will disenfranchise minority voters and lead to “a new Jim Crow” era in the state. The bill has also come under withering criticism from national brands, including Delta Air Lines, Coca-Cola and Microsoft. On Friday, Major League Baseball announced it will move its July 13 All-Star Game out of Atlanta over the legislation.

What everyone’s talking about

Prayers held outside for what’s going on inside

On Tuesday afternoon outside the courthouse where former Minneapolis police officer Chauvin’s murder trial is being held, George Floyd’s brothers, family attorney Ben Crump, the Rev. Al Sharpton and Gwenn Carr, the mother of Eric Garner, prayed publicly after “a tumultuous week” of witness testimony. Sharpton led the group in a brief prayer to “set a tone of healing.” Inside the courtroom, the EMT who leads the Minneapolis Police Department’s emergency medical response training told jurors that officers are trained to call for an ambulance and provide medical aid if a situation is “critical.” Also in court:

Longtime Congressman Alcee Hastings, a Florida Democrat, has died at 84. He was diagnosed with pancreatic cancer in January 2019, and had served in the U.S. House since 1995. Before serving in Congress, Hastings served as a federal judge, but two years after he was appointed to the bench, he was charged with bribery in a federal sting operation. He was eventually removed from the bench, then ran for Congress, consistently winning reelection by wide margins. Hastings has been lauded by many for his work on broadening rights and protections for all Americans.

Paul Ritter, a Tony-nominated actor in theater, film and TVwho appeared in the “Chernobyl” miniseries and “Harry Potter and the Half-Blood Prince,” has died at 54, his representative confirmed. The actor died Monday evening at home after suffering from a brain tumor, surrounded by his wife and sons, representative Isabella Riggs confirmed to USA TODAY. Born in the United Kingdom, Ritter most recently starred as patriarch Martin Goodman in the British television series “Friday Night Dinner,” which ran from 2011 to 2020.

Two brothers who made a pact to kill their family members before killing themselves carried out their plan, according to officials, after six people were found shot to death in a suburban Dallas home. Officers say they went to the home for a welfare check after one of the brothers wrote a lengthy post on social media in which he revealed the grisly plan. The six family members found dead in the home were the two brothers, a sister, their father, mother, and a grandmother.

A break from the news

This is a compilation of stories from across the USA TODAY Network. Want this news roundup in your inbox every night? Sign up for The Short List newsletter here.