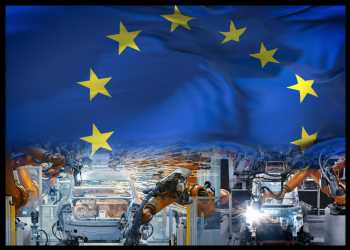 The factory Purchasing Managers’ Index rose slightly to 58.4 in November from 58.3 in the previous month. The flash reading was 58.6. A reading above 50.0 indicates expansion.

Average input lead times lengthened to a substantial extent once again. Nevertheless, both purchases and stocks of inputs increased at sharper rates during November.

There was substantial increase in costs which was the third-strongest in the series history. To alleviate pressures on margins, output prices were raised to the greatest extent since this series began in November 2002.

Among big-four economies, growth in Germany and Spain slowed from October, while France and Italy posted stronger expansions.

German manufacturers continued to struggle to increase production volumes amid ongoing supply-side constraints. The final IHS Markit/BME factory PMI slipped to 57.4 in November from 57.8 in October and the lowest in ten months. The score was below the flash 57.6.

On the other hand, France’s manufacturing sector growth accelerated for the first time in six months in November. The manufacturing PMI rose to 55.9 in November from 53.6 in October. The flash score was 54.6.

Italy was the clear stand-out performer, with growth here accelerating to a survey high, driven by strong production and new work. The manufacturing PMI advanced to 62.8 in November from 61.1 in October. Economists had forecast the index to remain unchanged at 61.1.

Spain’s manufacturing sector growth slowed in November due to supply constraints and price pressures. The manufacturing PMI registered 57.1 in November, down from 57.4 in October. The score was forecast to rise to 57.9.