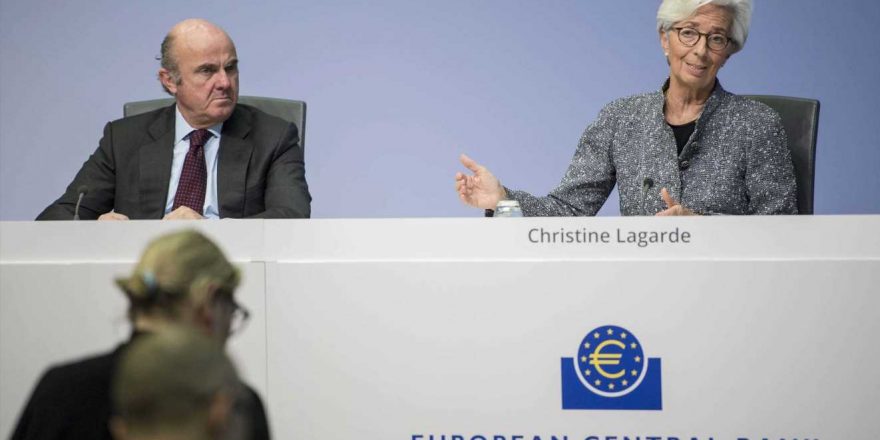 LONDON — The European Central Bank kept its monetary policy unchanged on Thursday but opted to slow down the pace of net asset purchases under its pandemic emergency purchase program.

The Governing Council voted to maintain the interest rate on the ECB's main refinancing operations at 0%, on the marginal lending facility at 0.25% and on the deposit facility at -0.5%.

"Based on a joint assessment of financing conditions and the inflation outlook, the Governing Council judges that favourable financing conditions can be maintained with a moderately lower pace of net asset purchases under the (PEPP) than in the previous two quarters," the ECB said in a statement.

Markets had been eagerly awaiting the Frankfurt institution's latest policy decision for signs of an imminent unwinding of pandemic-era stimulus, amid surging inflation and strong economic growth.

The euro gained 0.2% against the dollar following the decision to trade at around $1.1837, while European stocks pared earlier losses.

The ECB reiterated that interest rates will remain at their present or lower levels until inflation is seen reaching 2% "well ahead of the end of its projection horizon and durably for the rest of the projection horizon," and until the ECB judges that inflation will stabilize at 2% over the medium term.

"This may also imply a transitory period in which inflation is moderately above target," the ECB added.

Seema Shah, chief strategist at Principal Global Investors, said Thursday's move represented the first "meaningful step" toward tapering for the ECB, though acknowledged that the central bank would not be declaring this. The size of the purchase envelope remains the same, meaning the move is not technically a taper as yet.

"Characteristically, it hasn't tied itself to a specific pace of purchase, instead retaining an element of flexibility which will be helpful in the face of a potential tightening in financial conditions as Fed taper draws near," Shah said.

With market focus having shifted over the past week from the timing of Fed tapering to when the ECB might reduce the pace of its purchases, Shah said Thursday's announcement did not come as a surprise.

"With markets concerned about the risk of a hawkish policy error, Lagarde's efforts to disconnect bond purchases from rate lift-off will be important in reassuring investors that the central bank isn't on the verge of making a repeat of the 2011 policy mistake," she added.

Euro zone inflation notched a decade high of 3% in August and GDP across the 19-member common currency bloc climbed 2% in the second quarter, exceeding economist expectations.

The central bank's Pandemic Emergency Purchase Programme was implemented in March 2020 to support the euro zone economy through the Covid-19 crisis, and is due to end in March 2022 at a potential total value of 1.85 trillion euros ($2.19 trillion).

ECB policymakers have sounded contrasting tones as to the danger of inflation becoming persistent rather than "transitory," as has been the general consensus among central banks around the world.

Some analysts have suggested that the ECB will announce the reduction of its Covid-induced stimulus package in December, with the U.S. Federal Reserve having signaled that it will likely begin tapering by the end of the year.

ECB Chief Economist Philip Lane said in a recent interview that "September is very far away" from the planned PEPP conclusion date, suggesting a tapering announcement may yet be a few months away.

The asset purchase program (APP) will continue at a monthly pace of 20 billion euros, the Governing Council confirmed. The central bank has been using this program in combination with PEPP to sustain the 19-member economy.

"The Governing Council continues to expect monthly net asset purchases under the APP to run for as long as necessary to reinforce the accommodative impact of its policy rates, and to end shortly before it starts raising the key ECB interest rates," the statement said.