Sales of electric bikes and scooters have more than tripled over the summer months, according to Halfords as the health crisis has prompted people to steer clear of public transport.

While many retailers are struggling due to the economic upheaval caused by the coronavirus pandemic, the car and bicycle parts company is enjoying a purple patch as shoppers invest in new wheels as well as sprucing up old bikes left languishing in sheds and garages.

Over the past five months the retailer’s sales of bikes and cycling gear were nearly 60% higher than in 2019 as people bought bikes to get fit as well as to get to work. Within that demand for electric bikes and scooters soared 230%.

Halfords chief executive, Graham Stapleton, said bike sales had accelerated over the summer, with growth reaching 71% in August, and more expensive electric bikes, which typically cost between £400 and £500, increasingly sought after.

“The electric bike [sales] growth has been significant,” Stapleton said. “Nearly one in three of our adult bikes are electric against just 14% last year, so the proportion we are selling has almost doubled. I think that’s important because with electric bikes, it is not just leisure, it is for essential use in terms of getting around and getting to work. On some of these bikes you can travel from 40 miles on one charge.”

UK consumers bought 2.5m bikes last year, spending an average of £380, according to market research firm Mintel. Just 100,000 of them were e-bikes, a figure that was up 40% on the previous year.

John Worthington, senior analyst at Mintel, said: “The e-bike market has been growing rapidly over the past two years and consumer interest is high. While accounting for a fraction of bike sales, the scale of potential growth for e-bikes is huge. In European countries with much higher rates of cycling participation than the UK, e-bikes are becoming as popular as standard bikes.”

Hopes are high that lifestyle changes ushered in by the pandemic could become permanent. Around one in 10 English adults cycle regularly, according to the National Travel Attitudes Survey, with the transport mode accounting for 2% of all trips made. Road safety concerns and traffic are the most common reasons cited for not cycling more. 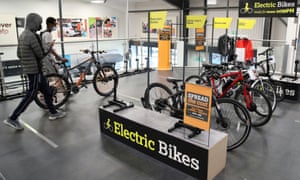 In the wake of the crisis the government has trumpeted plans for a “golden age” of cycling, with local authorities invited to bid for cash from a £250m emergency active travel fund to create infrastructure such as cycle lanes.

“Lockdown has shown there’s a huge appetite for cycling in the UK if the conditions are right, not just in terms of riding for pleasure but also for making those short essential journeys people might have used public transport for previously,” said Duncan Dollimore, Cycling UK’s head of campaigns.

“We now have to grasp the opportunity to change the way we move in our cities and towns for the better, and it’s down to national and local governments to make sure this isn’t squandered, and build the network of safe routes everyone is happy to use.”

The search for both sustainable and coronavirus-proof modes of transport has also made e-scooters an increasingly common sight on Britain’s roads since the lockdown ended. Rental e-scooters are now legal to ride on the UK’s streets, however, privately owned ones are not.

“It’s certainly a growing market but there will be a restriction to how big it gets, whilst e-scooters aren’t legal to ride on a public highway,” said Stapleton.

The strong Halfords figures, with overall sales now higher than in the equivalent period of 2019, also herald the return, en masse, of cars to Britain’s roads.

After four dismal months, with sales down as much as 62% in April, the boom in holidays in Britain put Halfords’ motoring arm back into growth in August. Motorists snapped up roof boxes and roof bars, and fitted new tyres ahead of long road trips. A big increase in demand for services and maintenance at its 367 garages also pointed to cars being used for shorter journeys, resulting in more wear and tear, the company said.

“The garage business is seeing very, very, strong growth as more cars get back on the road,” said Stapleton. “They’re also doing shorter journeys and that puts more pressure on cars because they’re starting and stopping more often. A lot more people are using cars, I think, to get to work rather than going by public transport.”