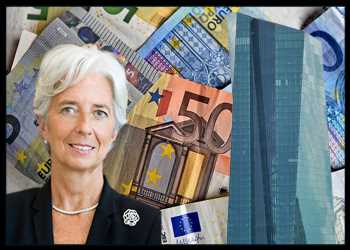 European Central Bank President Christine Lagarde said Monday that the euro area inflation is to remain higher for longer than anticipated, but will moderate in coming months, and it was unlikely that interest rates would be raised next year.

“If energy prices keep rising or supply constraints persist, inflation may remain higher for longer than we currently anticipate,” Lagarde said in a virtual hearing of economic and monetary affairs committee of the European Parliament.

“Overall, we continue to foresee inflation in the medium term remaining below our new symmetric two per cent target,” she added.

Policymakers do see wage growth next year potentially rising somewhat more than this year, but they assessed that the risk of second-round effects remains limited, Lagarde said.

Though inflation is expected to moderate next year, but it will take longer to decline than originally expected.

Despite the current inflation surge, the outlook for inflation over the medium term remains subdued, Lagarde said, adding that hence, the conditions that need to be met for policymakers to raise interest rates “are very unlikely to be satisfied next year.”

Regarding the pandemic emergency asset purchases, the ECB chief said an undue tightening of financing conditions is not desirable when purchasing power is already being squeezed by higher energy and fuel bills. That would represent an unwarranted headwind for the recovery, Lagarde added.

The bank will announce its plans regarding a further calibration of bond purchases in December.

“Even after the expected end of the pandemic emergency, it will still be important that monetary policy – including the appropriate calibration of asset purchases – supports the recovery throughout the euro area and the sustainable return of inflation to our target of two per cent,” Lagarde said.