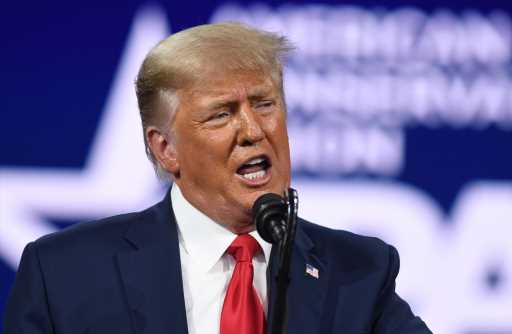 Donald Trump’s office emailed a statement to reporters on Tuesday in which the former president bashed the Oscars, noting its low ratings and suggesting that it return a host to the proceedings and change its name back to the Academy Awards.

“What used to be called The Academy Awards, and now is called the ‘Oscars’ —a far less important and elegant name—had the lowest Television Ratings in recorded history, even much lower than last year, which set another record low. If they keep with the current ridiculous formula, it will only get worse—if that’s possible,” Trump said. “Go back 15 years, look at the formula they then used, change the name back to THE ACADEMY AWARDS, don’t be so politically correct and boring, and do it right. ALSO, BRING BACK A GREAT HOST. These television people spend all their time thinking about how to promote the Democrat Party, which is destroying our Country, and cancel Conservatives and Republicans. That formula certainly hasn’t worked very well for The Academy!”

As president, Trump also took to criticizing the telecast, including last year, when he bashed Oscar voters for giving best picture to Parasite. At a rally, he said of the South Korean film, “What the hell was that all about? We’ve got enough problems with South Korea with trade. On top of that, they give them best movie of the year. Was it good? I don’t know.”

ABC and the Academy of Motion Picture Arts & Sciences frequently use the term “Oscars” to describe the ceremony, but AMPAS still refers to the awards as the Academy Awards.

The ceremony drew an audience of less than 10 million, a record low, according to early Nielsen numbers. Talk hosts and commentators on the right seized on the low viewership to claim that it was due to political statements and speeches made during the telecast, something that even Regina King acknowledged at the outset could be a turnoff. But there’s also a strong case to be made that the viewership numbers reflect the popularity of the nominees. With moviegoing curbed due to the Covid-19 pandemic, many had yet to see or even hear many of the contenders, even when they were available on streaming platforms.

The political statements that were made during the Oscars did not focus on Trump, but on topics like gun violence and policing.