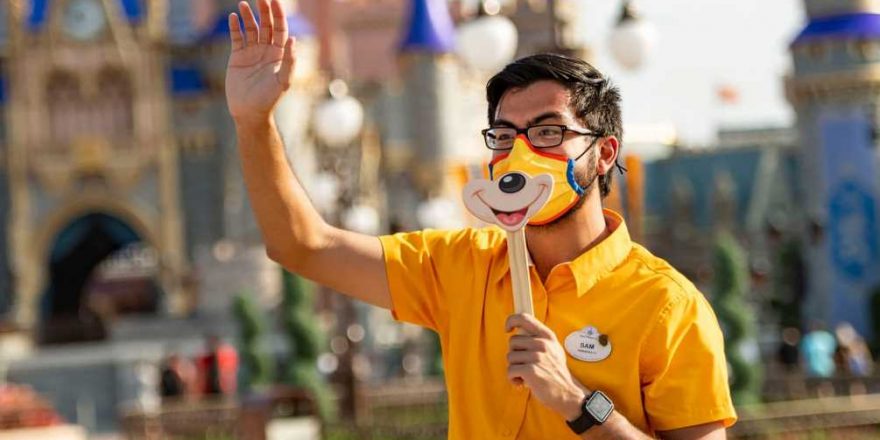 Disney may trade more like Netflix now, with streaming subscriber growth the all-important stock catalyst, but as the Disney+ adds went down in the third quarter, costs in the real world keep going up. And that means that, at least in the short-term, even Disney has an inflation problem weighing on its margins.

Disney has pricing power that is the envy of most companies, but that isn't improving sentiment with investors. The stock is negative on the year, and getting crushed on Thursday, and was far behind the 20%+ gains in the S&P 500 Index even before the earnings disappointment.

Now may be a time for long-term investors with patience to buy in, but Disney is a show-me story into the first half of 2022, and rising costs are part of the headwinds.

By some measures, Disney's recent performance demonstrates how strong its brand is with consumers. The Genie+ app, launched for the parks reopening post-Covid at a price of $15, was purchased by one-third of the guests at Walt Disney World per day. Disney CEO Bob Chapek said on the Wednesday earnings call he isn't sure people realize the "gravity" of that success.

"That is a very, very material increase for us in per caps, but also in margins," Chapek said. He expects "long-lasting benefits in terms of yields."

Walt Disney World attendance grew double-digits in Q3 while per capita spend increased roughly 30% from fiscal 2019 levels, and the company's management expects per cap spend to remain well above pre-pandemic levels in fiscal 22, but that is offset by the elevated costs from, among other factors, inflationary pressures.

Inflation on the minds of Wall Street analysts

The parks, experiences and products business saw margins weaken in the third quarter and analysts on the Disney earnings call asked about the inflation issue.

"That's on the minds of every CFO and every senior management team of companies out there," said Disney CFO Christine McCarthy. "Inflationary pressures are something we are all looking at and trying to assess and think about how do we manage through."

For Disney, there's the inflation that isn't macroeconomic but related to the intense competition for content in the streaming wars, which McCarthy noted. "Because of just the competition for talent, for everything that's involved in productions, content costs have gone up," she said.

And that compounds the problem of real-world inflation for Disney, which said it would spend over $5 billion on capex in this fiscal year. No one is going to ding Disney for spending more on content as that is the key to a future blockbuster Disney+ subscriber adds quarterly number that moves the stock up. But, "that capex number really jumped out at us," said Tuna Amobi, CFRA Research analyst.

Disney noted in its earnings that despite strong cost mitigation efforts, management expects certain costs to remain elevated in FY22 versus pre-pandemic as a result of inflationary wage pressure and costs related to new projects.

Some analysts dismiss inflation as an issue for Disney.

"Disney has pricing power. Inflation only kills you if you can't raise prices," said Laura Martin, Needham & Co. analyst. Streaming costs are an issue, she said, 'but that's content inflation."

Wages are going up at parks and fewer people are allowed in as a result of Covid safety precautions, but she said the parks business is performing well this year even if at lower margins.

Parks revenues topped estimates ($4.17 billion vs. $3.96 billion analyst estimate), but operating profit fell far short of expectations, and international parks experienced losses. Profits of $640 million were well below the $901 million consensus, according to Atlantic Equities. This was the first time since the pandemic started that all of Disney's theme parks were open for the entire quarter, but despite that, the unit's small profit was not close to what analysts projected, according to CNBC earnings analysis.

And Inflation as a key word was all over the analyst Disney earnings recap notes.

Atlantic Equities wrote that it is "more interested as to how the profitability of the business will look once it is operating at full capacity," and even though the success of Genie was among the highlights in the result, additional cost pressures were notable and "inflation is perhaps the most concerning."

The parks performance provided "optimism, not yet clarity," wrote Wells Fargo. "Inflation is a risk (wages, product COGS). It has a buy on Disney, but wrote, "there's not enough data yet to argue it with conviction."

JP Morgan was also bullish but twice noted the inflationary headwinds: "While there are increased costs associated with new attractions and inflationary pressures near term, we are confident that the parks can emerge from the pandemic with better profitability given the improvements the company has been able to implement, along with innovations such as Genie+. Its legacy Parks business has bounced back ahead of expectations, and we anticipate the segment emerging from COVID-19 with more profit upside longer term, despite some near-term costs pressure from inflation."

Disney's CFO didn't have a simple fix to offer on the call for the rising costs.

"Where we see it directly in our parks business is primarily through the hourly wage inflation that we've seen through contract renegotiations and our commitment to paying our park workers well. And then, we have things on the cost of goods side," McCarthy told analysts.

She told Wall Street that just last week she was talking to Disney's Parks senior team about responses to inflation.

"There are lots of things that are worth talking about. We can adjust suppliers. We can substitute products. We can cut portion size, which is probably good for some people's waistlines. We can look at pricing where necessary. But we aren't going to go just straight across and increase prices. … We're really going to try to get the algorithm right to cut where we can and not necessarily do things the same way. As I mentioned, we're also using technology to reduce some of our operating costs, and that gives us a little bit of headroom also to absorb some inflation. But we're really trying to use our heads here to come up with a way to kind of mitigate some of these challenges that we have."

That's what Wall Street wants to hear, Amobi said, but there also will be a resetting of expectations for the company which has traded at a hefty premium to peers in the entertainment space.

"What you would expect them to do is find ways to mitigate the margin pressure from inflationary costs," he said. "The question is how far can they go and when."

"You can't just assume all those things will completely mitigate. You're talking about things that could take several quarters. But they want to give the impression they are not sitting idly by. … how far they can execute remains to be seen," Amobi added.

Morgan Stanley analysts wrote that the parks rebound has to be set against "the rapid return of the Parks cost base. That cost base is returning from its FY19 levels with several years of labor cost inflation including a step up in minimum wage for parks employees. We clearly have upside to our revenue expectations at the Parks, but the path towards prior peak margins will likely take longer than the path towards prior peak revenues."

A company with pricing power as strong as Disney has commanded historically leads to magnification of the cost issues when they occur, and it will take time for it to become clear what any lasting impact on margins is from inflation.

"The pricing power makes it even more surprising and tells you even more about companies' inability to pass on those costs to consumers," Amobi said.

Disney, measured by the annual increase in the price of its parks passes, has always been able to outpace inflation by several orders of magnitude. "That should serve them well, but it's not to say those margins pressures will ease," he said.

This quarter demonstrated that the biggest stock catalyst, streaming growth, will not move in a straight line up, and that should not be a surprise as that also has been seen in Netflix performance. Now Disney has a less than clear inflation problem too — how much of it will be sticky (like wage inflation), and how much of it will be "transitory" and pass within a few quarters and make it easier for management to hit its financial targets.

McCarthy noted on the call with analysts that Disney has already done a lot of work as it has come back from the pandemic, "fundamentally changing" some of the ways it does business on both the revenue side and the cost side to optimize margins. But overall margins for the global business for Disney Parks, Experiences and Products, at a little under 12%, was well below pre-Covid levels.

Wage inflation, commodity input costs, talent costs, and the cost of the goods and services are all inflationary items Disney is highly exposed to, and that was evident in a quarter during which parks rebounded and margins were recovering, but off a low base.

"I've said this before, and I'll say it again that I believe that we will get, not only back to, but have a high probability of exceeding those previous margin levels in our parks because of some of the things we've done. … Over the long term, that these fundamental changes are going to result in higher margins overall," McCarthy said.

The negative investor sentiment on Disney may prove transitory — there were moments in recent years when ESPN cord-cutting fears sank the stock rashly before a recovery — but the stock's current performance shows investors will need to once again be convinced.

"We believe investors are likely to take more of a wait and watch approach to the stock at best near term," Barclays concluded.

Given all the macro data points on inflation mounting in recent months and this week's 30-year high in year over year consumer price inflation, no company or investor is immune.

"Inflation will be paramount for quite some time and maybe even delay attainment of pre-pandemic margins. They will get there, but it will take longer to get there," Amobi said. "In the case of Disney some costs might prove transitory and some much more permanent and no one knows. … we always knew we would be dealing with this sooner or later."