Whether or not you know, or think you know, the real-life story of Dana Higginbotham, about her five-month abduction and torture, about her famous playwright son transforming the horror into art and testimony, about the actress who gives voice to unthinkable trauma without uttering a single word, Lucas Hnath’s Dana H. will throw you again and again in its fewer than 90 minutes.

In tandem with Tina Satter’s equally captivating Is This A Room – they share, on alternate nights, the stage of the Lyceum Theatre – Dana H. is, as much as anything, an example of the weird and unexpected space made on Broadway by a pandemic-reduced roster of productions. I can’t say for certain that these two plays, short in length and experimental in form, found their place on Broadway because of a less fierce rivalry for roofs, but I can, without hesitation, applaud their arrival, however it came to be.

I mentioned that the actress here – the magnificent Deirdre O’Connell -doesn’t speak, but that’s not entirely accurate, but I was reluctant to use the phrase “lip-sync” too early. The art form’s usual connotation of comedy and/or deception doesn’t apply here. Mouthing the words of actual interview tape recordings in which Higginbotham opens up about her ordeal, O’Connell and Dana H. convey both the specifics of one woman’s trauma and something universal about the all-encompassing nature of abuse and its survival.

Some background: In 1997, Dana Higginbotham, a psych ward chaplain in Florida whose rough-and-tumble background helped her carve a sort of speciality niche among the mental patients, meth addicts and ex-convicts who required her aid, had just divorced her husband, saw her only child Lucas off to New York University and lost her employ with an evangelical Christian facility that prohibited divorce.

In short, she was alone and isolated, an ideal target for the man Dana H. identifies only as Jim, a meth-addicted, prison-tattoo-covered, seriously disturbed ex-con raised from childhood in the criminal underworld of White Supremacy and violence. After Dana offers him kindness and recuperation following a horrific suicide attempt, a raving Jim shows up at her home one late night, beats her unconscious and abducts her, an event told in painful detail made all the more terrible with the revelation that it was merely the beginning of a five-month captivity and a seemingly endless series of cheap motels and criminal way stations.

Years after her kidnapping, Dana’s son Lucas Hnath, by now an acclaimed and famous playwright whose works include A Doll’s House Part 2 and Hillary and Clinton, asks a third-party – a theater friend named Steve Cosson, himself a noted Off Broadway writer and director – to conduct a series of interviews with Dana, who feels ready to finally share her story publicly. Those are the recordings we hear in Dana H. 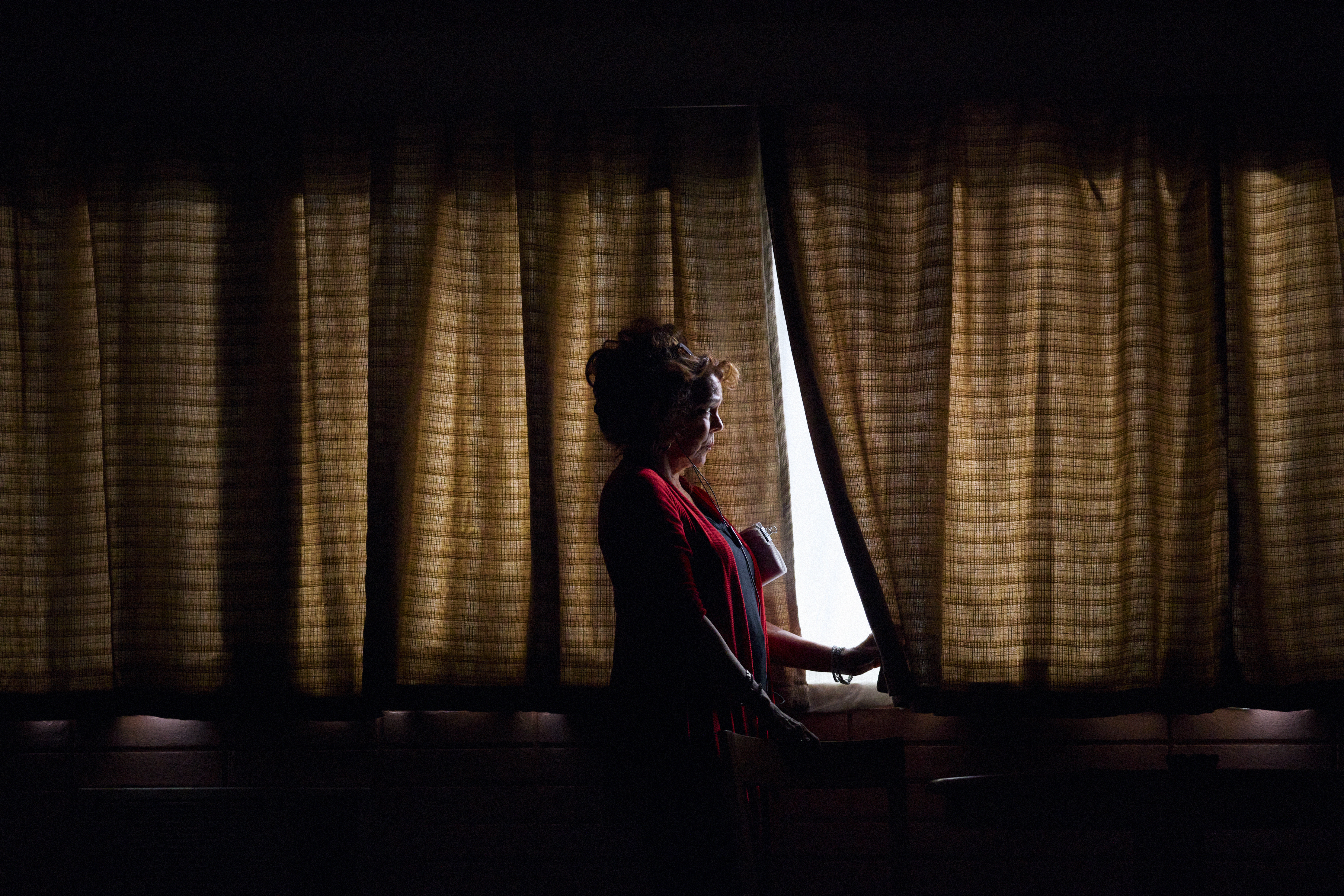 Directed by Les Waters with both a documentary attention to detail and an artfulness that can seem dreamlike, Dana H. plays out on a perfectly recreated Florida motel room, designed by Andrew Boyce as a sort of cloister in pinks and pale greens that instantly says “Florida,” and more gradually, “prison.” O’Connell, seated and facing the audience, mouths Higgenbotham’s words and, rather miraculously, conveys through facial expressions and nervous gestures the rush and swirl of emotions that belie her tamped-down, shell-shocked verbal delivery.

Here’s how Dana evenly describes an early encounter with the outside world while under Jim’s control:

“One of the very first things that ever happened was going to a pawn shop, and he wanted a shotgun. He’s got his hand on my neck the whole time, almost everywhere we were his hand was always on my neck like that. And he says straight ahead to the guy, ‘I can’t buy it…I’m a felon but uh she’s going to buy it.’ And the guy said ‘oh ok.’”

And so begins a pattern that would repeat itself over the next five months, a cycle of abuse and control that seems to form a literal barrier between abuser, victim and the outside world, and that makes stories like Dana’s so difficult to fully understand. Dana knows full well, from her days in captivity to the years after escape, the questions that will haunt her: Why didn’t you just run away? Why didn’t you scream for help every time you encountered a store clerk, or were taken to an emergency room, or pulled over by the police?

Consider it the towering achievement of Dana H. that by the end of this play, all but the thickest of listeners will no longer feel compelled to ask those questions. For starters, Dana/Higgenbotham spells out the real-world implications of Jim’s status in the White Supremacy organization that has a deep reach into the nation’s prison system and beyond – a status that she is convinced, and argues convincingly, led to one cop after another taking a hands-off approach when confronted with a bruised and bloody woman.

But Dana’s words, and O’Connell’s performance that is by turns steely and vulnerable, goes to a deeper level of why and how. Her mesmerizing account of a five-month waking nightmare pulls us so deeply into the psyche of abuse that we fully comprehend the utter surrender, the no-way-outness.

When escape comes, it seems the most unbelievable part of the play – that’s no criticism – a dizzying now-or-never moment conveyed through a heretofore absent theatrical flash, as a motel maid goes about the tedious business of tidying the just-vacated room, sheets bloody, lights suddenly flickering and the many recordings of Dana’s voice overlapping into a ear-splitting cacophony, a depiction that wouldn’t be out of place in a Twin Peaks episode. (Credit here to the extraordinary sound design of Mikhail Fiksel and Paul Toben’s lighting work).

That moment of surreality and confusion not only speaks to the mental state of the lead character, but demands we ask some tough questions about narrator reliability and the fluidity of perspective. Does the motel maid – portrayed by the only actor besides O’Connell to take the stage – not notice the red splatter on those white sheets? Is she simply inured to what must be, in her world, a commonplace sight? Like so many of the people who cross paths with Dana and her tormenter, the maid probably notices.

Or maybe she doesn’t. The terror comes in realizing that it makes no difference either way.