The possibility of harassment by cops and fear of the unknown have forced a large number of truck drivers to abandon vehicles at the transport centres and flee home. 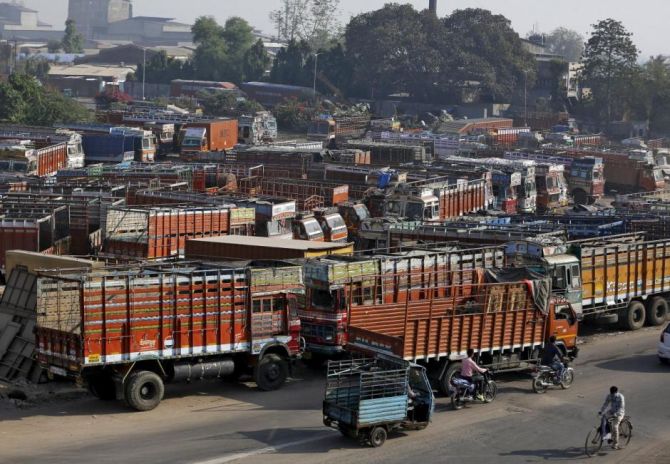 Mahendra Choudhary, owner of a supermarket in Navi Mumbai, has been facing acute shortage of staples like flour, rice, pulses, lentils and fast moving consumer goods (FMCG) products, including soap, oil and shampoo.

This is mainly owing to a surge in demand from donors of such items.

“On Monday, there was demand from someone for 50 packets of flour along with some other consumer goods. I had run out of stock,” said Choudhary.

The problem facing Choudhary has its roots in shuttered factories, distribution centres and a restricted number of trucks on the road.

The possibility of harassment by cops and fear of the unknown have forced a large number of truck drivers to abandon vehicles at the transport centres and flee home.

Despite a series of steps taken by the government in the first week of the 21-day lockdown to ensure smooth transportation of goods, the situation on the ground tells a different tale.

Transport of goods remains badly hit as confusion remains among various stakeholders and road transport becomes the victim of disconnect between policy makers and local authorities, said transporters and analysts.

Almost 2.5 million trucks among the 5 million are off road, according to the Indian Foundation of Transport Research and Training (IFTRT).

“It (the government) has constituted a committee on logistics and is making tall claims with regard to smooth movement of essentials.

“But the fact is that the lockdown has completely crippled the road transport sector,” said S P Singh, senior fellow at IFTRT.

There is also no clarity on how the procurement and distribution of the bumper rabi crop – the only saving grace at this point – is going to be handled, he added.

The government has allowed movement of non-essential items but it’s an insignificant step considering that factories, go-downs and warehouses remain shut, said Singh.

He pointed out that all recent initiatives to smoothen movement of trucks will have no meaning unless the whole eco-system that comprises dhabas and eateries to tyre repair shops and garages come back to normalcy.

“Truck drivers fear they will be stranded without food and water for many days in case of a breakdown. Therefore, they have left for their native places,” said Balmalkit Singh, chairman, All India Motor Transport Congress.

Sachin Haritash, founder and chief executive at Mavyn, a truck aggregator that counts Hindustan Unilever, Amazon, Grofers and Flipkart among its key customers, has been struggling to get trucks for its customers.

The remaining are off the road owing to non-availability of drivers. All these are driver-cum-owner trucks.

“We have been counselling them and assuring them of their safety so that they can come back and start taking the load.

“The campaign has started working,” said Haritash, adding that there has been a communication gap between those manning the borders and the local authorities.