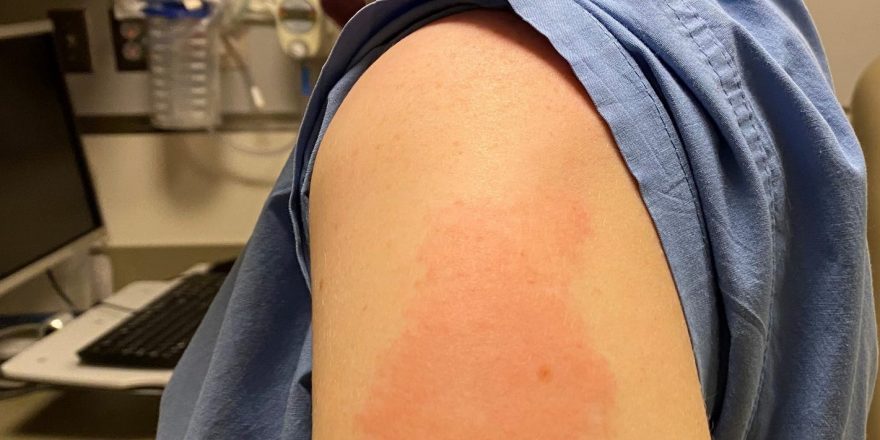 Getting COVID-19 can cause all manner of odd skin reactions. A new study finds some of them, including COVID toes, a measles-like rash and shingles also can be rare, and thankfully brief, side effects of getting the Pfizer-BioNTech or Moderna vaccines.

The minor, though sometimes itchy and annoying, reactions were seen in a database of 414 cases of delayed skin problems linked to the vaccines and reported to health care professionals. The cases were collected between December and February before the Johnson & Johnson vaccine had been authorized, so it was not included.

“People can get full-body rashes, and that can be surprising and a little scary, but these patients did extremely well, recovered and were able to go back and get their second dose,” said Freeman, director of global health dermatology at Massachusetts General Hospital.

Joe Biden has vowed vaccine eligibility for all adults by April 19: But what about appointment availability?

“For people whose rashes started four or more hours after getting the vaccine, 0% of them went on to get anaphylaxis or any other serious reaction,” she said. “Zero is a nice number.”

The delayed skin responses described in the study often start a day or so after vaccination but can appear as long as seven to eight days later. They are different from severe and immediate allergic reactions, which occur within the first four hours of getting vaccinated.

The findings appeared Wednesday in the Journal of the American Academy of Dermatology. Becausethe cases only include those reported to a dermatological registry, it’s impossible to say how common they across all people getting the vaccines. In general, the researchers believe them to be rare given the low numbers seen among patients.

While skin reactions to the vaccines can occur, as long as they start more than four hours after vaccination, they are generally not life-threatening.

“People can feel reassured about getting the second dose of their vaccine,” said Freeman, who is the principal investigator for the international COVID-19 Dermatology Registry. “Even if you have a pretty impressive rash after the vaccine, as long as it didn’t start within four hours of vaccination you should feel comfortable getting the second dose.”

Researchers point out most people who get vaccinated do so without developing any sort of reaction. The Moderna and Pfizer-BioNTech clinical trials reported rare skin reactions and a recent study of almost 65,000 people found that anaphylaxis after vaccination was an extremely unusual event.

A harmless but annoying rash that appears in some people who have gotten the Moderna vaccine for COVID-19. A report in the New England Journal of Medicine published March 3, 2021 found the reaction is not more severe with the second dose of the vaccine and often didn't occur at all. The new data was reassuring to physicians who encourage people who had had the rash to get their second dose. This patient was seen at Massachusetts General Hospital in Boston. The reaction lasted four days. (Photo: Dr. Kimberly Blumenthal)

The most commonly reported reaction was a raised, sometimes itchy red rash, often at the site of the injection, which can occur up to a week or so after being vaccinated. It’s been called COVID arm or Moderna arm, as about 95% of the reactions occur with the Moderna vaccine.

For Moderna arm, most people had no reoccurrence when they got their second shot. Among those that did, it was generally less pronounced and faded on average within three to four days.

COVID toes were another rare, annoying but not life-threatening reaction. Also called pernio or chilblains, the skin sores or bumps occur on a patient’s toes, and in about 10% of cases on the fingers. They can cause red or purple swelling of the digits and are likely linked to inflammation of the blood vessel walls.

“Having your toes turn purple is uncomfortable but it’s not a reason to not get the second dose,” Freeman said.

COVID toes, a reaction similar to chilblains that can occur in rare cases after receiving the Pfizer or Moderna COVID-19 vaccines. It is annoying but not life-threatening, say dermatologists. (Photo: Dr. Esther Freeman, Massachusetts General Hospital)

An all-body rash reported by some patients, called a morbilliform rash, often is referred to as “measles-like” though it isn’t measles.

There were a few reports of people who had had chickenpox as children having a shingles outbreak in response to the vaccine.

Another reaction was skin swelling in people who have had dermatologic fillers as a cosmetic treatment, though it was very rare.

“If you’ve had facial filler, it doesn’t mean you shouldn’t get the vaccine,” Freeman said.

A rash reported by a small number of patients who have received either the Pfizer or Moderna COVID-19 vaccine. it is called a morbilliform rash, often referred to as “measles-like” though it isn’t measles. It is not life-threatening and fades over time. (Photo: Dr. Esther Freeman, Massachusetts General Hospital)

Among those who had an immediate allergic reaction to the Pfizer-BioNTech or Moderna vaccines, it was extremely rare and no deaths have been reported.

A study of 65,000 employees at Massachusetts General Hospital who were vaccinated with either the Pfizer or Moderna vaccine found the rate of life-threatening anaphylaxis was 0.025%.