Home » Cops are willing to say Derek Chauvin is a murderer. Right-wing media stars are still struggling with that fact. 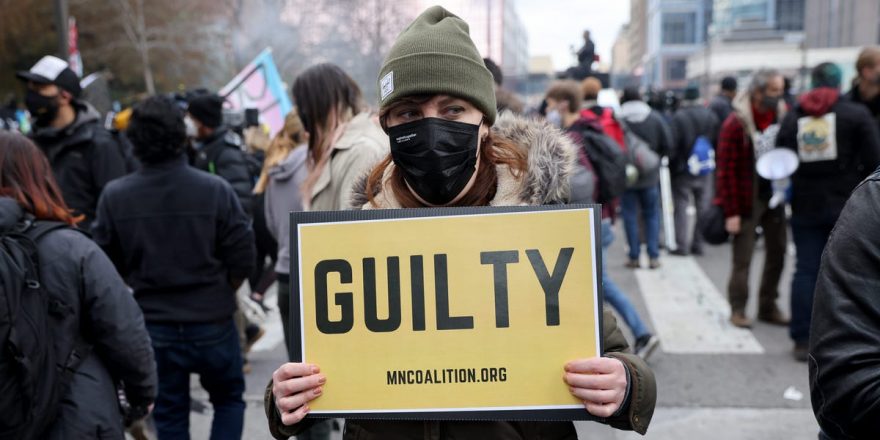 Cops are willing to say Derek Chauvin is a murderer. Right-wing media stars are still struggling with that fact.

We can say that now that, after a jury of Chauvin’s peers said he committed second-degree murder when the former Minneapolis police officer knelt on Floyd’s neck.

Several of Chauvin’s colleagues broke the blue wall of silence and testified against him during the trial. The pro-law enforcement former prosecutor and judge Jeanine Pirro told her fellow Fox News panelists that the jury came to the correct conclusion based on facts, and “this verdict will be held on appeal.”

Even the nation’s largest police union — typically the most immovable opponent of police accountability — said the second-degree murder conviction was the right call.

But despite the fact that due process was served and a fair trial was held, a lot of the media’s most prominent right-of-center voices are still desperately clinging to the notion that Chauvin’s murder conviction is the result of a predetermined show trial.

“Mob justice,” is how Blaze TV commentator Candace Owens characterized the extraordinary rare occurrence of a police officer being held accountable for the cold-blooded killing of a Black man.

That’s the narrative, and the “Blue Lives Matter” right is sticking to it.

Right-wing snowflakes have a meltdown

In the interest of calling balls and strikes, there were some irresponsible comments from left-of-center figures prior to the jury’s verdict.

Rep. Maxine Waters didn’t do anyone any favors when she urged protesters to “get more confrontational” if Chauvin were to be acquitted. CNN legal analyst Laura Coates insinuated Chauvin’s defense attorneys explaining reasonable doubt to a jury is somehow evidence of guilt. And it is not the place of a president to say he’s “praying for the right verdict” of a jury trial, as Joe Biden did.

Despite these kerfuffles, there’s no evidence they affected the jury — which had been partially sequestered — or its relatively quick decision to convict Chauvin of all three charges he faced.

But a lot of popular right-of-center media figures don’t see it that way.

Pizzagate propagandist Mike Cernovich said Chauvin “did not get a fair trial as everyone from rioters to a member of Congress to the POTUS tampered with the outcome. Today is one of national disgrace — a true insurrection.” Cernovich added the trial was “worse than January 6th,” referring, of course, to the deadly riot by Trump supporters that overwhelmed the US Capitol.

Ben Shapiro tweeted that he thought a manslaughter conviction was more a reasonable consequence for Chauvin. Then he opined: “No evidence was presented that Floyd’s killing was racist, but Chauvin was convicted of that, and so was America.”

Shapiro’s most famous quip is “Facts don’t care about your feelings,” but it is factually inaccurate to assert that Chauvin was convicted of racism, or that America was on trial at all.

Tucker Carlson said the jury was saying “please don’t hurt us” with its decision to convict. And later in his show he abruptly cut off his guest Ed Gavin, a former New York City corrections officer, for having the temerity to criticize Chauvin’s actions as “excessive.”

Trump-supporting “disaffected liberal” vlogger Tim Pool tweeted: “Cops need to resign en masses now” [sic]. Pool later added: “I’m over it … Abolish police or whatever … I own guns … It’s the cities that want this and it’s the cities that will suffer because of it.”

This is a collective meltdown of anti-anti-Chauvinism.

If unedited video evidence of a cold-blooded murder stokes public outrage, that doesn’t mean the accused cannot get a fair trial.

If police brutality and the institutional blocks on accountability are thrust into the national spotlight, that doesn’t mean “all police” or “America” are on trial.

And if a bad cop gets sent to prison for committing an act so unconscionable that police unions won’t defend it, it doesn’t mean that the “woke, Marxist, BLM” brigades have imposed “anarcho-tyranny,” as Andrew Torba, CEO of the far-right friendly social media site Gab, said in a statement.

The mental gymnastics and conspiratorial leaps of logic required to believe Chauvin’s conviction somehow portends an end to the rule of law in America are formidable.

It’s how anti-reform conservatives let their feelings get in the way of facts.