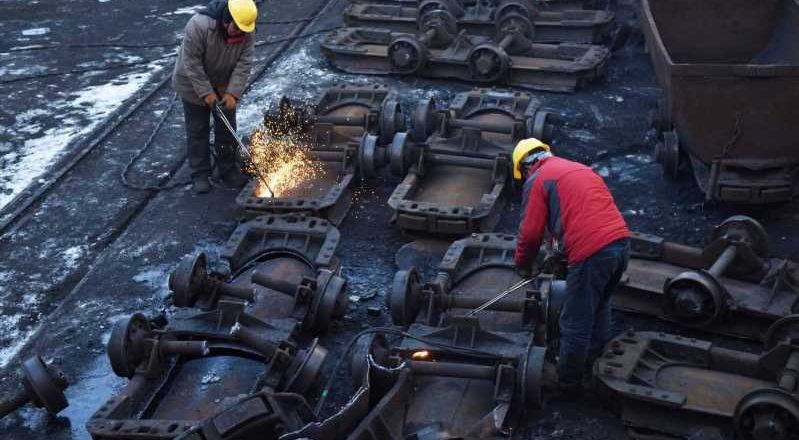 BEIJING — China's bond defaults are increasingly concentrated in a part of the country whose growth could face greater pressure from tough new restrictions on carbon emissions, according to analysis from Nomura.

Fifteen regions in the northern half of China, including Beijing and Inner Mongolia, accounted for 63.4% of the number of national bond defaults last year, up from 51.5% in 2019, according to Nomura's estimates published in an April 27 report.

It's the latest sign of growing economic disparity within the country, where GDP and population growth in the north already lags that of the south. Now, China's pledge to to reduce carbon emissions by 2030 means production restrictions are coming for the northern region's economy.

"The new environmental campaign has the potential to hit North China — where a majority of steel, aluminum, and other raw materials are produced and processed — especially hard," the Nomura analysts wrote.

"Since most of those steel and aluminum plants are in low-tier (less developed) cities, the public financials of these cities will likely be disproportionately impacted, adding to credit default risks," they said.

Meanwhile, South China has more export hubs like the provinces of Guangdong and Jiangsu. The region counts Shanghai and Shenzhen among its major cities, and was an early beneficiary of China's move to allow more foreign and privately-run businesses into the relatively closed domestic market.

Historical factors, as well as overcapacity built up following the 2008 financial crisis, have contributed to further weakness in the north, the Nomura analysts said. They estimate North China contributed to just 35.2% of national nominal GDP last year, with per capita GDP just about three-fourths of that in South China.

The north also relies more on debt. Outstanding corporate bonds as a percentage of GDP in North China rose to 52% in 2020, versus 30% for South China, according to Nomura.

"The north/south divide could become an important factor for credit differentiation in the years ahead," the report said. "Indeed, we have already observed some deterioration in the capacity of the North China provinces to obtain funding from bond markets."

The north accounted for 10% of national corporate bond issuance in the first quarter, down from 42% for all of last year, the analysts said.

Increased pressure on the north comes as defaults are ticking up in China overall, particularly among state-owned enterprises that investors used to assume had implicit government support.

While the level of defaults is still quite low relative to the overall market, the trend will prompt investors to differentiate among different bond issuers, said Ivan Chung, head of Moody's greater China credit research and analysis team.

Chung said issuers have canceled bond issuance in the last month or so for two different reasons. One is that the issuer was too weak to attract enough investor appetite, he said. The other is that, despite good quality, the market sentiment has driven up the cost of the bonds, making them too expensive.

In some signs of growing concern, in April investors worried that state-owned bad debt manager Huarong would not be able to make its payments.

As China looks to balance growth with reducing carbon emissions, tapering pressure on carbon-heavy projects may not be enough. Privately-run businesses in renewable energy can find it difficult to get financing from a system in which the largest banks are state-owned and prefer to lend to similarly state-backed enterprises.

One option for financing renewable energy projects can be issuing "green" bonds, of which $15.7 billion dollars' worth was sold in China in the first quarter, according to Reuters, citing data from Refinitiv. That volume was almost four times what it was a year ago, the report said.

Foreign investment bodies like the World Bank-affiliated International Finance Center have gotten increasingly involved as well. Some of the project plans IFC lists on its website for China include wastewater treatment and solar power.

The scale of IFC's financing in China has grown from $500 million annually 15 years ago, to $1 billion a year more recently, with about 60% related to climate, said Randall Riopelle, acting regional director for East Asia and the Pacific and country manager for China for IFC.