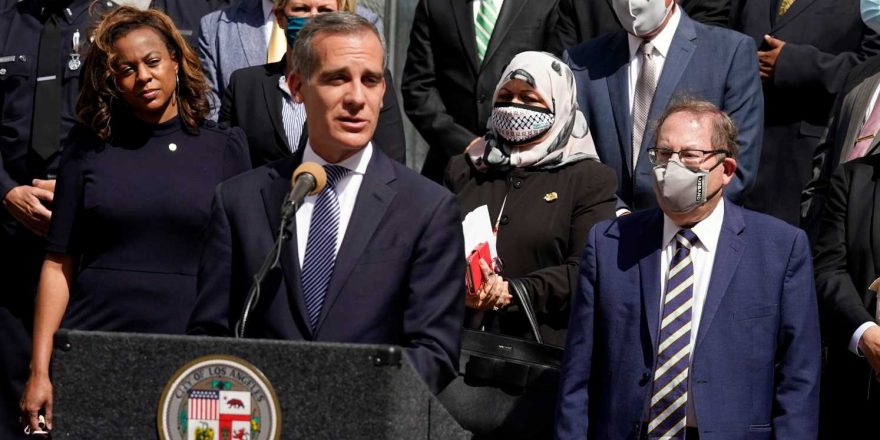 Authorities in Los Angeles are investigating a pair of incidents this week as possible anti-Semitic hate crimes amid increased tensions between supporters of Israel and Palestinians in major U.S. cities.

The Los Angeles Police Department said pro-Palestinian protesters turned violent in two separate incidents that they say could be related. On Monday, police say, a caravan of vehicles attempted to chase down a Jewish man in the Fairfax District of the city — an area that’s considered the center of the Jewish community in Los Angeles.

Footage of the incident shows two vehicles driving after a man with people in the vehicles waving Palestine flags. Police say the Jewish man escaped without injuries.

LOS ANGELES: Video shows Jewish man on foot being chased by cars with Palestinian flags on La Brea. Comes amid another incident of Palestinian men beating Israelis nearby. pic.twitter.com/6LNrfYXvmz

The following day, a similar scene broke out in the Fairfax District after a caravan of vehicles waving Palestine flags paraded through the area and stopped in front of a restaurant, said Beatrice Girmala, an assistant chief at the Los Angeles Police Department. Those in the vehicles started harassing diners before they got out and a fight broke out, Girmala said.

Footage of the incident shows a group of people, most of them in black with face coverings, throwing punches near a restaurant. One man is seen swinging a gold stanchion at others before he is thrown against a car and beaten by several.

Girmala said it’s possible both incidents are related and authorities are investigating and working to identify and arrest those involved in both incidents. No one has yet to be arrested.

A cease-fire between Israel and Hamas took effect Thursday evening after both parties agreed to halt an 11-day military confrontation that left hundreds dead and sparked international alarm.

Related: Trauma children in Gaza experience is unlike anywhere else in the world, experts say

Why peace remains elusive in Gaza: Key players in the Israel-Palestinian conflict

The development followed growing U.S. and international pressure on Israel to call off a military operation that pounded the Gaza Strip with airstrikes. Hamas fired rockets indiscriminately into civilian areas in Israel. At least 230 Palestinians, including 65 children were killed, and 12 Israelis, including two children.

Los Angeles Mayor Eric Garcetti said while he understands this is a difficult moment and passions are bound to run high seeing the violence overseas, it is no excuse for violence or the targeting of innocent people. He vowed authorities would find those responsible.

Los Angeles Mayor Eric Garcetti is pictured speaking in front of civic and faith leaders outside City Hall in Los Angeles. Faith and community leaders in Los Angeles called for peace, tolerance and unity in the wake of violence in the city that is being investigated as potential hate crimes (Photo: Marcio Jose Sanchez, AP Images)

“We will bring people to justice and it will send a message that this sort of discrimination, these sorts of attacks, this bigotry, these chilling images will not be tolerated in Los Angeles, and should not be tolerated anywhere,” Garcetti said at a Thursday afternoon news conference where he, along with community and faith leaders, condemned the recent hate crime incidents.

City Councilman Paul Koretz, whose district includes Fairfax, said he was “outraged” and the violence wouldn’t be allowed against fellow Jewish people.

“We’re not going to allow the violence in the Middle East to spill out onto the streets of Los Angeles,” he said. “Everyone is entitled to express their opinion, but never through violence. Pro Palestinian protesters can’t be allowed to viciously assault random people on the street because they happen to look or be Jewish.”