The copper-green Confederate Soldier statue that holds the stage before the cast of Broadway’s wondrous revival of Caroline, Or Change assembles looks as if it could rouse itself with the slightest provocation, perhaps through a spark of the same theatrical magic that will soon give life to a washing machine, a radio, a clothes dryer.

But this statue of this Southern “Defender” remains unmoving, a dead thing. And yet…

The malign power of “that ol’ copper Nightmare Man,” as one character has it, lingers over this powerful musical in so many varied ways, a soul crusher for one character, a call to rebellion for others and, for the audience, confirmation that this tour de force by Tony Kushner (book and lyrics) and Jeanine Tesori (music) has only grown in power and immediacy in the 17 years since its last Broadway production.

In this still-young Broadway season already boasting a remarkable line-up of new productions that, regardless of box office sales or seats filled, is a small miracle, the Roundabout Theatre Company production of Caroline, Or Change places itself squarely at the forefront of the best in culture this city has to offer. Directed by Michael Longhurst with intensity and sensitivity, and performed by a cast that seems to have made a pact to sustain itself at the towering heights achieved early and unfailingly by its mighty star Sharon D Clarke, this Caroline, Or Change is a hurricane wind unleashed on decrepit legacies and newfound cautions. 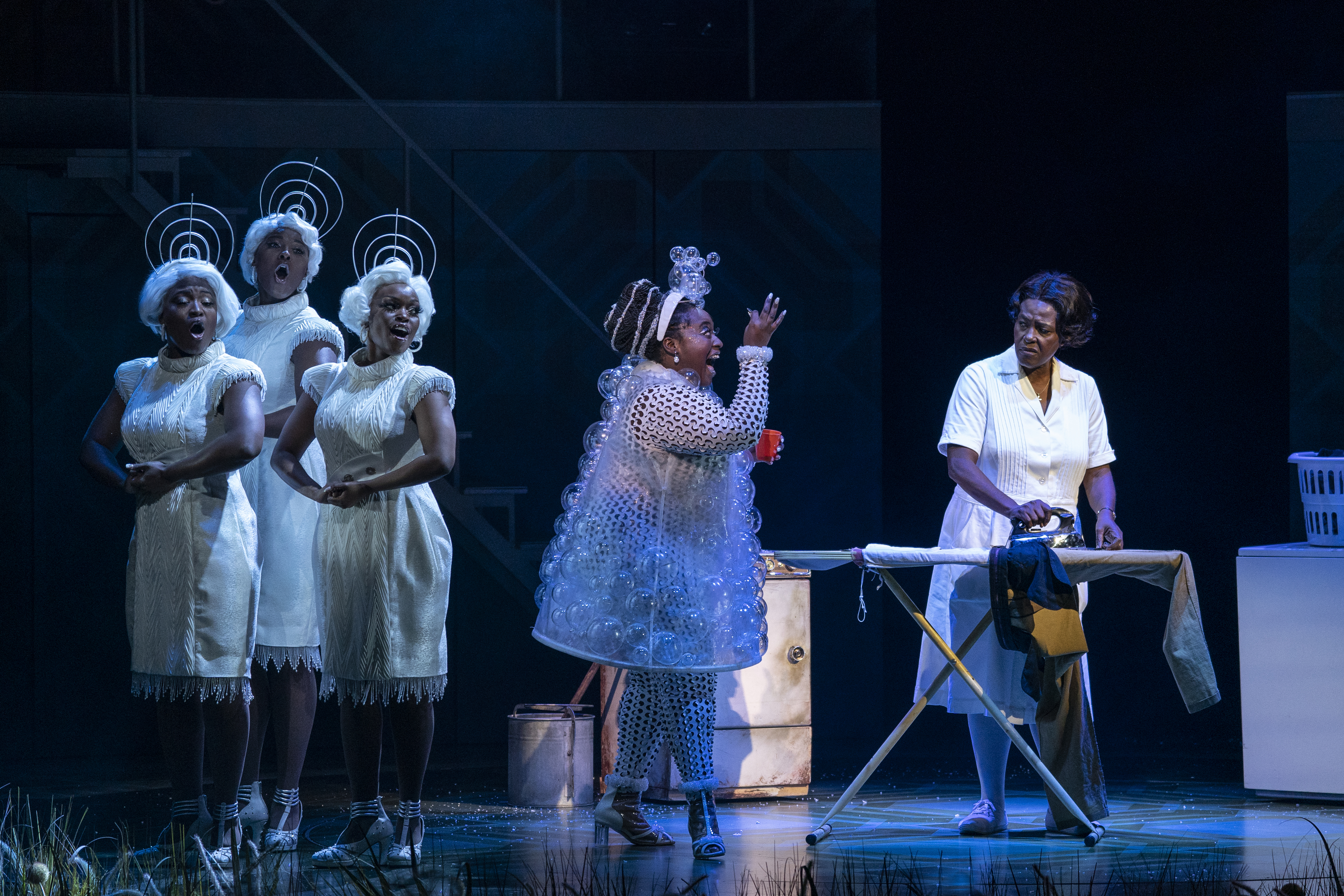 Set in 1963 Louisiana, in a Jewish household devastated by recent loss and blind to the miseries it endures and spreads, the sung-through musical revolves around Caroline Thibodeaux (Clarke), the Black maid who toils in the Gelman family’s stiflingly hot basement, consumed by never-ending baskets of laundry and worries about the blood family that she leaves alone to care for strangers. Her most constant companions (and one of the musical’s great inspirations) are a washing machine, a dryer and a radio, each appliance brought to life by whimsically costumed actors, a Greek chorus by way of Maytag that consoles, mocks and reflects the spirit-killing drudgery and regret that have turned a woman’s middle years into a long desert between a happier past and a still bleaker future.

Despite Caroline’s surliness – she wears her anger like armor, concealing heartbreak over a recent divorce and unending worry for her the children she can barely feed – the maid has become a hero to eight-year-old Noah Gelman (Jaden Myles Waldman at the reviewed performance). To Noah, Caroline is both stability and comfort, a reminder of life before cancer took his mother, a holdover from before the intrusion of a new and thoroughly unwelcome stepmother. And something more: Perhaps Noah senses in Caroline – as she does in him – a deep, unrelenting sadness that neither can articulate or assuage.

As tenuous and, on her part, begrudging, as their connection may be, the bond between Noah and Caroline is no more fraught than the others on view. Noah’s father Stuart (John Cariani), resigned to a lifetime of grief and loneliness in the aftermath of his wife’s death, finds escape only in practicing his clarinet, while stepmom Rose (Caissie Levy) has taken the roles of wife and mother as much out of loyalty to her late best friend as anything else. They all mean well, and they are all failing.

Meanwhile, Caroline runs a household not her own, for a pittance that can barely put food in the mouths that depend on her, much less pay for the dentistry those mouths require: young boys Jackie and Joe (Alexander Bello and Jayden Theophile, respectively, at the reviewed performance), and teenaged Emmie (Samantha Williams). It’s the latter who most worries Caroline, as the girl’s budding interest in both boys and social unrest terrify a woman who has seen the havoc that can be wrought by each.

Still, even when all she wants is a quiet night out of that basement and away from the family not hers, Caroline’s thoughts are often troubled by the boy she’s paid to raise. She can’t quite shake him. But make no mistake: Caroline is no Calpurnia. Whatever affection she feels for her young, white charge is buried so deep it risks suffocation. Her one outward show of geniality, of tolerance, is the daily ritual in which she permits little Noah to light the single afternoon cigarette she allows herself.

With a river-flow of music that encompasses the Motown and soul styles coming from the radio (as rendered by a girl group whose ever-changing outfits can convey the brown tweed fabric covering old speaker cabinets or the glittery flash of the Supremes at their peak), the klezmer of a Hanukkah celebration, Christmas carols, field songs and the Blues, Caroline, Or Change is, purely on an aural level, intoxicating. Tesori’s score is a thrill to experience, and a marvel to hear again after so many years, and Kushner’s lyrics ring as fresh and powerful as ever, maybe more so in an era when the public debate on race and privilege can seem simultaneously revolutionary and hidebound.

How better to portray the bondage of a servant’s days than to have a washing machine come to life as a bubble-costumed companion (Arica Jackson) on tedious mornings, or a dryer (Kevin S. McAllister) giving voice to the lewd daydreams of a lonely afternoon? (Fly Davis designed the costumes, with whimsy when allowed and starchy confinement when necessary; the same is conveyed through Davis’ sets – an oppressive, barren basement for Caroline, Mid-Century Modern charm for the Gelmans).

Such is Caroline’s netherworld existence that she regards all of these companions – and the little boy who so badly wants to be part of her world – with something that straddles resignation and rage. She straddles as long as she can, until she tips.

That tipping point arrives via change, in one of its guises. Like a tiny spark that ignites a firestorm, Caroline’s world is upturned by Rose’s new household policy designed to teach the often distracted Noah a lesson in money management: From now on, when he leaves spare change in the pants pockets tossed into the laundry bin, Caroline is free to keep the dimes and quarters for her own family. 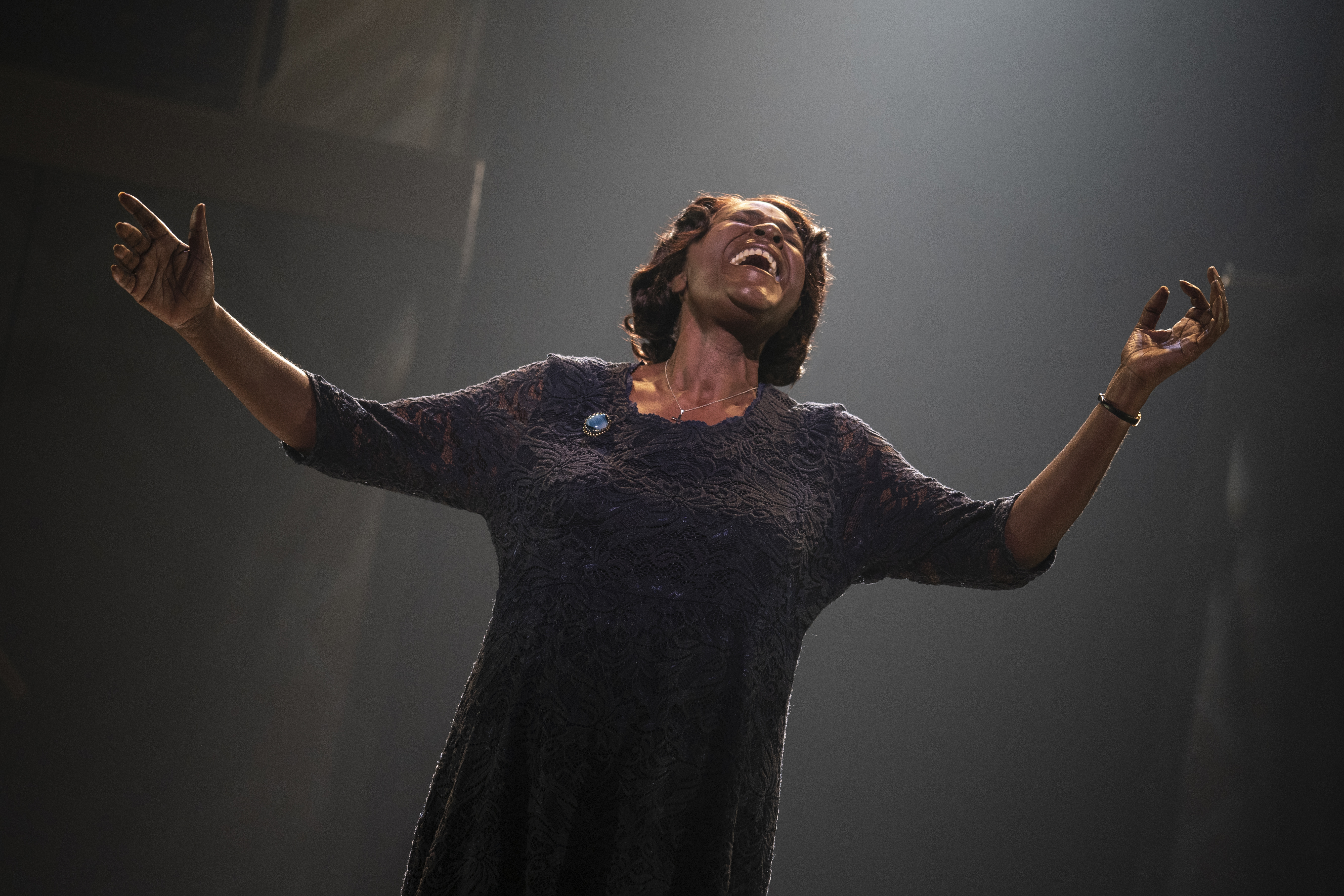 “A grown woman got no business taking pennies from a baby,” is Caroline’s initial response, but soon the prospect of treating her own children to the penny candy they crave – and the dentist visits they need – is overwhelming. Whatever delicate balance has been maintained by Caroline and Noah is decimated when the boy accidentally leaves $20 in Hanukkah gift money in his dirty laundry. In a heartrending scene, the distraught boy demands Caroline return his money, and when she angrily resists, the racism that Noah didn’t even know he harbored erupts in a vile way. Caroline, years of anger suppressed, responds in kind with a hideous, anti-Semitic rejoinder that will haunt them both.

Later, in an anguished and volcanic aria that belongs in the company of “And I Am Telling You I’m Not Going” and “Rose’s Turn,” Clarke’s Caroline erupts with all the feelings she’s tried for years to contain. She sings, alone on the stage and costumed, finally, is something other than a starched, white maid’s uniform:

Here, in the performance that surely helped win Clarke a well-deserved Olivier Award, Kushner resurrects two of his great, longtime themes, territory he’s explored at least since Angels in America. His Louis Ironson once warned us that AIDS would demonstrate the limits of tolerance – “because when the shit hits the fan you find out how much tolerance is worth” – and here, the playwright seems to suggest, a measly twenty bucks will do just as neatly. Human connection, even between a young boy and the woman he worships, is a frail thing in a society all but constructed of barriers.

And Caroline’s aria reminds of another Kushner theme, the one that lands in this musical’s title: Change. We can take the word’s use here to mean the coins that set so much of the story’s action in motion, but it’s the other definition that stings most. Change, as Kushner wrote in Angels, happens when “God splits the skin with a jagged thumbnail from throat to belly, and plunges a huge filthy hand in,” grabbing “hold of your bloody tubes.” Just try not to think of that when Clarke pleads in prayer:

Murder me God down in that basement, murder my dreams so I stop wantin, murder my hope of him returnin, strangle the pride that make me crazy. Make me forget so I stop grievin.
Scour my skin till I stop feelin.
Take Caroline away cause I can’t be her, take her away I can’t afford her.
Tear out my heart
strangle my soul
turn me to salt
a pillar of salt
a broken stone and then . . .
Caroline. Caroline.
From the evil she done, Lord, set her free
set her free
set me free.

By this late point, the makers of Caroline, Or Change have gone too far and too deep to provide the sweet resolution we might crave, particularly with regard to the future of Caroline and Noah. But we’re not left hopeless either, not for Noah, nor the women who tend him, and certainly not for the young, spirited Emmie, who senses a future her mother can’t fathom. She has a secret or two yet to tell, a world that wants shaking, and she’ll do so as the proud daughter of a maid named Caroline Thibodeaux.

Caroline, or Change opens tonight at Broadway’s Studio 54 theater, and runs through January 9, 2022.