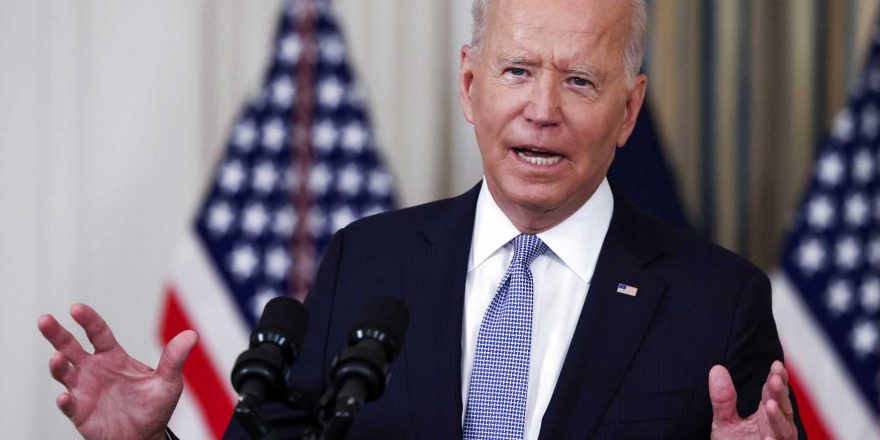 Led by Texas Gov. Greg Abbott, Republican-run states are already gearing up to challenge the legality of the Biden administration's vaccine mandate for private companies before the Labor Department has even published the rules.

President Joe Biden last month directed the Occupational Safety and Health Administration, a tiny agency that polices workplace safety for Labor, to write rules requiring private companies with 100 or more employees to vaccinate their staff against Covid-19 or test those who aren't at least once a week.

More than 130,000 businesses across the U.S. are bracing for the new rules, which will apply to roughly two-thirds of the private sector workforce. OSHA told CNBC it delivered its proposal to the Office of Management and Budget on Tuesday night.

The rule is expected to take effect soon after OMB completes its review. Because it's being written under emergency procedures, OSHA can shortcut some of the usual regulatory bureaucracy, like a public comment period that would normally delay it by several months. OSHA will likely give companies time to comply with the new mandate before broad enforcement begins, according to Debbie Berkowitz, who served as a chief of staff and senior policy advisor at OSHA during the Obama administration.

Abbott hopes to preempt the new rules, issuing an executive order Monday that bars any entity from mandating vaccines for people who object on the basis of personal conscience, religious belief or medical reasons, including past recovery from Covid.

Texas-based Southwest Airlines and American Airlines this week said they expect to be subject to federal vaccine mandates. As federal contractors, those carriers have said they are subject to Biden administration vaccine rules that are stricter than the forthcoming OSHA rules.

The sweeping national mandate will almost certainly face more legal challenges. Nearly every GOP state attorney general in the U.S. signed a letter to the president last month vowing to use "every available legal option" to halt the mandate, calling it "counterproductive and harmful."

"The one-size-fits-almost-all approach you have decreed makes clear that you intend to use the OSH act as a pretext to impose an unprecedented, controversial public health measure on a nationwide basis that only incidentally concerns the workplace," the Republican attorneys general wrote.

Florida Gov. Ron DeSantis said Tuesday the state legislature should pass legislation preventing companies from firing people who do not wish to get vaccinated.

States, however, probably don't have legal standing to challenge the rule, according to Georgetown University law professor David Vladeck.

All signs point to a probable showdown in the courts between the administration and businesses. Trade groups have been lining up opposition to the mandate.

The U.S. Chamber of Commerce, in a September letter to the secretary of labor, also raised a long list of questions from businesses, ranging from who will cover the cost of testing to how employers should deal with workers who refuse both vaccination and testing.

The National Retail Federation said Tuesday in a letter to Labor Secretary Marty Walsh that it worried the requirements could compound labor shortages as the busy holiday shopping season approaches. The organization suggested a 90-day implementation period to give businesses time to come into compliance.

The Retail Industry Leaders Association has called the standard "a colossal undertaking" and warned that "testing capacity must be scaled immensely" to meet the expected demand. The National Association of Manufacturers said its members should not be burdened by "undue compliance costs."

The National Federation of Independent Business is flatly opposed to the rule, accusing the Biden administration of "commandeering" businesses to act as "instruments of coercion" against employees.

Under the law, the labor secretary has the authority to issue what's called an emergency temporary standard if he or she determines workers "face grave danger from exposure to substances or agents determined to be toxic or physically harmful or from new hazards." The emergency standard is supposed to be replaced by a permanent rule after six months.

The Republican attorneys general argued in their September letter that employees in general are not in grave danger from Covid due to the level of vaccination in the public and natural immunity among those who have caught the virus and since recovered.

They also argued that OSHA can only regulate hazards specific to the workplace, not those generally present in the world at large. The National Retail Federation echoed that view in its letter.

"The agency cannot expect employers to control their employees' behavior during their activities outside of work," the federation's top lobbyist David French wrote.

"Workers face the danger of COVID-19 wherever they go," French said. "They are endangered by COVID-19, because they are human beings going about the world, not because they go to work."

That is a point where Republicans and Democrats largely disagree. The virus has infected almost 45 million Americans, killing more than 721,000, according to data compiled by Johns Hopkins University.

"OSHA's mandate is to protect workers from hazards and in this case an infected worker, an unvaccinated worker, is a potential hazard to other employees," said Jordan Barab, deputy assistant secretary of OSHA during the Obama administration.

The rule will allow those who don't want to get vaccinated to opt for weekly testing instead. More than 65% of the U.S. population has had at least one Covid shot, while 56% are fully vaccinated, according to the Centers for Disease Control and Prevention.

However, many employers may decide that it's more cost efficient to just require vaccines at the outset, according to David Michaels, the former head of OSHA under the Obama administration and an epidemiologist.

"Many of us hope most employers will do what United [Airlines] has done and say all workers must get vaccinated unless they have a medical condition or strongly held religious belief," said Michaels, who is now a professor at George Washington University.

OSHA's emergency standards have a mixed track record in court. To survive legal scrutiny, the agency must not only demonstrate there's a grave danger, but also that the rule is necessary to protect workers from that danger.

Demonstrating necessity is a high legal bar that could face vulnerability in court, according to Dorit Reiss, an expert on public health regulation at UC Hastings College of Law. Prior to the pandemic, the agency had not issued an emergency standard since 1983, when it sought to reduce workers' exposure to asbestos.

The U.S. Fifth Circuit Court Appeals invalidated the standard, ruling OSHA did not demonstrate that the rule was necessary to protect workers from the danger. The agency has issued emergency temporary standards 10 times since 1970, and the courts halted or completely overturned them four times, according to the Congressional Research Service. A fifth emergency standard was partially vacated by court order.

The Republican attorneys general are now arguing that Biden's vaccine and testing mandate is not necessary, claiming there are less intrusive ways to combat Covid. They also argue that the mandate doesn't make sense for companies with employees mostly at home or working outside.

Vladeck, however, said the vaccination or testing mandate is plainly within OSHA's authority, supported by a century of case law that gives the government power to impose public health requirements.

"OSHA has very sweeping powers accorded by Congress and its goal is to protect the health and safety of every working man and woman in the U.S.," he said.

The White House has dismissed opposition, arguing that Covid clearly presents a grave danger to workers and that federal law supersedes state law.

"The law basically requires the Department of Labor take action when it finds grave risk to workers," White House press secretary Jen Psaki said in September. "And certainly a pandemic that killed more than 600,000 people qualifies as [a] 'grave risk to workers.'"