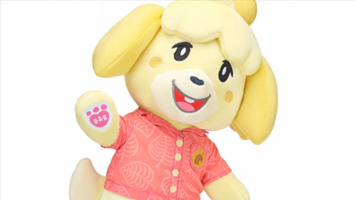 Build-A-Bear Workshop is partnering with Nintendo to create cuddly versions of two Animal Crossing: New Horizons characters for lovers of the critter-filled game.

“We are thrilled to bring the island fun of Animal Crossing: New Horizons to Build-A-Bear Workshop,” Jennifer Kretchmar, Build-A-Bear’s chief digital and merchandising officer, said in a statement. “Fans of the game are sure to be transported to an island paradise and ready for fun with these furry friends. This collection is perfect for gamers and collectors of all ages!”

The build-your-own-stuffed-animal company is offering two Animal Crossing characters, Tom Nook and Isabelle, exclusively online for a period of time before they are available in stores this summer.

In addition to Tom Nook and Isabelle, the collection features clothing and accessories – all inspired by the popular Animal Crossing: New Horizons game for Nintendo Switch, which was released last year at the start of the COVID-19 pandemic. Prior to the Switch game, Animal Crossing was released in 2001.

On Instagram Tuesday, the Build-A-Bear posted a “stuffing” video featuring twins Veronica and Vanessa, who stuffed the Animal Crossing characters.

The collection became available to the public on Tuesday at 10 a.m. CST, and eager customers were allowed to enter the sale’s waiting room a half-hour early. Everyone in line was given a random place ahead of the drop.

While the prospect of the new release provided some excitement from customers who watched the “stuffing premiere,” others expressed disappointment with the selection of characters made available.

@guildmaster.athena seconded the sentiment: “My disappointment is immeasurable and my day is ruined.”

“just two? Hardly a collection. Everyone was looking forward to more :\ I woke up early for this,” added @charrebi.

On Instagram Monday, the company posted about the collaboration after a tease on March 20, noting that the Animal Crossing collection comes as the game marks “one year of island adventures.”