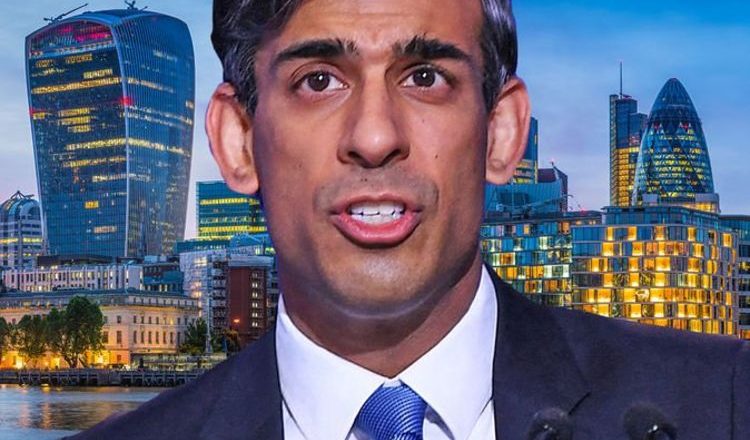 Rishi Sunak will ‘make himself available’ to be PM says expert

But Professor David Blake has warned the Chancellor in order to safeguard its world-class reputation, the Square Mile must fight tooth and nail against Brussels’ bid to force financiers to relocate to Paris or Frankfurt. His remarks came in the wake of a speech by Mr Sunak in which he outlined his strategy for untangling the UK from burdensome EU red tape by ditching laws originally imposed by Brussels in order to offer British firms more flexibility.

Prof Blake, Professor of Economics at City, University of London, said: “Sunak is now following through on the recommendations I made in my article Brexit and the City back in 2018.

“As I said then, Brexit is a golden opportunity for the City of London to escape the protectionist clutches of the EU in order to maintain its position as a World Financial Centre leading the new digital revolution of blockchain and fintech.”

However, he warned: “To make the best of Brexit, the City needs to address the following issues.

“First, it should recognise that its place is to service the real financial needs of businesses and individuals in the UK, Europe and the rest of the world and that this is best done outside the EU which, because of its protectionism, its excessive regulation and the folly of the euro, is destroying growth and innovation in the EU member states.

“Second, it should agree a ‘consistent and forward-looking Brexit strategy’ in order to secure a ‘bold, bright, buccaneering post-Brexit future’, as demanded by the Lord Mayor of London, Jeffrey Mountevans, at the City Banquet at Mansion House on 26 October 2016.”

Thirdly, Prof Blake said the City needed to build on the protections afforded by international law to counter the EU’s demands that providers of financial services to EU citizens and companies need to be physically located in the EU to do business.

“There is more investment banking expertise on the Isle of Dogs than in the whole of continental Europe put together.”

Prof Blake added: “Finally, it should aim to quickly recover the competitive edge that it has lost in recent years.

Meanwhile Leigh Evans, Vice Chairman of the CityUnited Project, said: “Any initiative by the Government to take onerous and unneeded EU laws off the statute book and remove rules which only benefit EU firms is to be welcomed.

“We would also urge the re-introduction of competition into the regulatory framework, so sadly missing since the Securities and Investment Board became the Financial Services Authority (FSA) in 1987.

“However we have concerns at the pace of the proposed changes. It is now nearly a year since we left the EU and progress has been very slow.”

“His report was excellent and was very well-received by Boris Johnson in June, but now we need to see real action.

He urged the Government to: