Home » Business » BMW feels that it makes more sense to engineer gasoline- and battery-powered vehicles together. 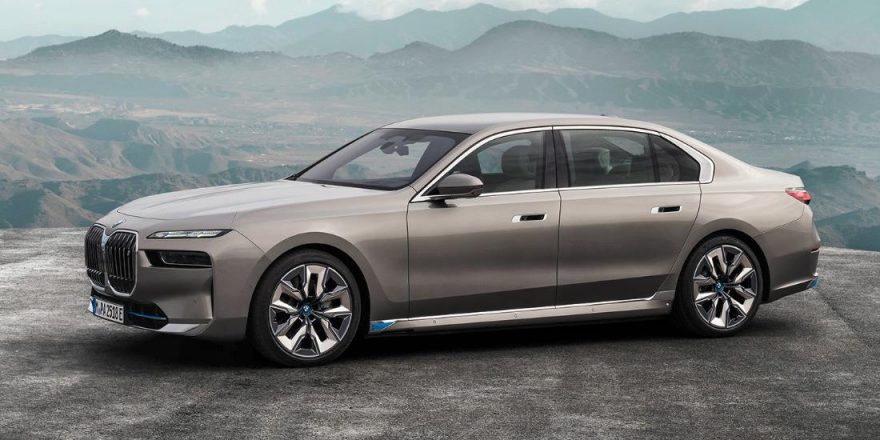 BMW feels that it makes more sense to engineer gasoline- and battery-powered vehicles together.

(CNN)Electric vehicles, with their need for lots of expensive batteries, have often trended towards luxury. Electric cars from Porsche, Mercedes, and Audi have all hit the market in recent years. BMW has come out with its own electric cars like the iX and i4 and now the new i7, a battery-powered take on the brand’s new most expensive sedan.

While BMW is probably better known for its smaller 3 Series and 4 Series cars, the 7 Series is the brand’s showpiece for luxury and technology. The i7 is the electric version of a new generation of the BMW 7 Series flagship unveiled on Wednesday.
With a starting price of $119,300, the all-wheel-drive 536 horsepower i7 xDrive60 will be able to go 300 miles on a full charge, which is less than the competing Mercedes EQS or Lucid Air. It will also offer a V8-powered gasoline version, the 760i X-drive, with the same horsepower output and a starting price that’s $300 less. It will look almost identical. A gas-powered version with a 6-cylinder engine will have a starting price of $93,300.

This new version also highlights BMW’s flexibility-first electric vehicle strategy, which is different from that of luxury competitors like Mercedes-Benz and Audi. While those other luxury brands’ electric vehicles are based on dedicated EV chassis with little relationship to their gas-powered models, BMW emphasizes adaptable engineering as its edge. 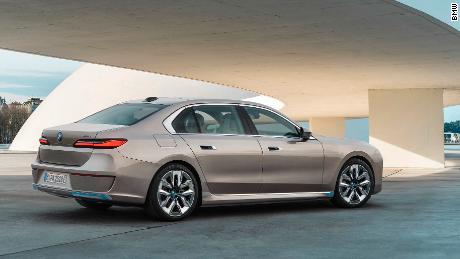 BMW has engineered all its new models so they can be built with internal combustion engines, fully electric power or as plug-in hybrids that combine both electric and gas power. BMW executives insist this is not just a matter of fitting batteries and electric motors into cars that were intended to have gas engines. Instead, these vehicles have been designed, from the outset, to be built with any of these drive systems.

A major benefit of doing it this way, BMW executives say, is that it gives the company flexibility to easily produce more — or fewer — electric cars or gas-powered cars on the same assembly lines rather than having to commit manufacturing resources just to EVs. With cars and SUVs designed to be built as either, the car maker also doesn’t risk putting millions of dollars of development costs into an electric-only model that might find little demand in some markets.
Another benefit, BMW chairman Oliver Zipse said, is that customers needn’t choose between two completely different models when deciding whether they want an electric or gas-powered car. They can just decide they want to buy a BMW 7 Series, then choose whether they want the gasoline or electric version, just as they might decide whether they want a V8 or a straight-6 engine. Either way, customers get the same luxury car experience and design.

The downside of a common engineering platform is that, to enable both electric and gasoline power, designers need compromises. Cars with internal combustion engines need a large amount of free space up front for the engine, a smaller one typically under the trunk for the fuel tank, and often a long tunnel down the middle to connect the engine to the wheels. Electric cars, on the other hand, can have smaller electric motors mounted closer to individual wheels, and while they don’t have a fuel tank or a transmission tunnel, they need a large, relatively flat area, typically on the bottom of the car, for the batteries.
The Mercedes EQS electric sedan, for example, has only a short hood that houses some electronic components, and it has a nearly flat floor allowing more interior storage space.
Zipse insisted the 7 Series represents a superior full-size luxury sedan regardless of its power source. The driving experience will be excellent, he said, as will interior comfort and technology.
“There is no car with a more spacious, luxurious second row,” he said, during a meeting with journalists.
Back seats are a major reason for buying this sort of large car. In full-size sedans, there generally isn’t much more room (if any) in the front seats compared to smaller cars. The extra space usually goes to those in the back. 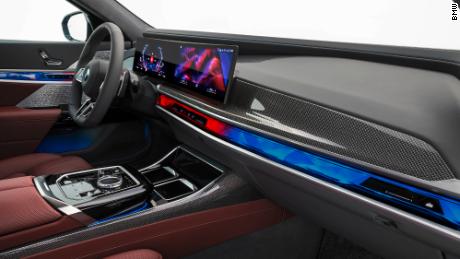 As in many other high-end large cars, the back seats can recline while leg and foot rests rise from beneath seats. (BMW claims its seats recline more than competitors’, though.) The front passenger seat, if it’s unoccupied, can also move forward and fold down to allow more space.
BMW 7 Series buyers can get an optional 31-inch high-resolution video screen that folds down from the roof to provide entertainment for back seat passengers. Combined with an available high-end stereo system and powered window shades to block out light, the 7 Series can be a better place to watch a movie than someone’s own living room, according to BMW. Front seat occupants can also watch streaming videos on the center screen when the car is parked.
Four-wheel steering will enable the car to turn more tightly on curvy roads and in parking lots and to change lanes more smoothly on the highway. Inside, there are few knobs and buttons. Instead, buttons appear as lighted icons on a strip of what looks like decorative trim that runs across the dashboard.
The car’s headlights are obscured by dark coverings while, above them, turn signals and daytime running lights are housed in prominent narrow bars. As an option, the turn signals and daytime lights can include Swarovski crystals that sparkle in sunlight. As another option, the 7 Series’ large “kidney” grille can be outlined in lights at night.
For when the driver would rather not bother, assistance technologies allow the driver to completely let go of the steering wheel for long periods on divided highways. This technology, similar to General Motors’ Super Cruise, requires drives to keep their eyes on the road ahead at all times.
The 7 Series can automatically drive itself into and out of parking spaces even with the driver outside the vehicle using a smartphone app. It can also drive itself through a pre-programmed course, such as around pylons in a parking garage, on its own, a feature somewhat similar to Tesla’s Summon mode.
A sophisticated “head up display” which displays data in the car’s windscreen can align images and text so they appear as if laid over roads and other features in the real world. The system can also display parking regulations in the area.
Performance is a core part of BMW’s brand image. For decades, BMW’s marketing tagline was: “The Ultimate Driving Machine.” Executives now say that electric vehicles will take the lead in the carmaker’s performance pantheon with the fastest and most powerful versions of its vehicles being battery-powered. With the new 7 Series, the i7 shares its ranking as the most powerful version with the V8-powered 760i. There are no plans for a V12-powered 7-series model in this generation of the car.

A sophisticated air suspension works automatically to keep the car level even in fast turns. Computers can use data from GPS maps and cameras on the front of the car to predict when an upcoming curve will require the suspension system to react.
BMW has said that half of the cars the company sells worldwide will be electric by 2030. That includes Rolls-Royce and Mini vehicles. Both of those iconic British brands are owned by BMW, and plan to sell only electric vehicles by 2030.
Source: Read Full Article