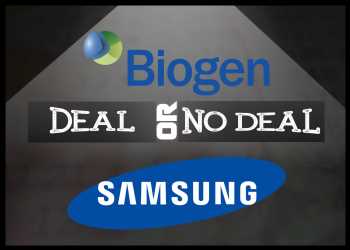 Biogen/Samsung Takeover – Deal Or No Deal?

Samsung Group is in talks to acquire U.S-based Biogen Inc. (BIIB) in a deal which could be valued at over 50 trillion won (US$42 billion), reported the Korea Economic Daily on Wednesday. However, the South Korean company has reportedly denied holding any such takeover talks.

Biogen shares had touched a 52-week high of $468.55 on June 7, 2021, following FDA approval of its monoclonal antibody Aduhelm for early stage Alzheimer’s disease. Aduhelm is the first new treatment to be approved in nearly 20 years in the United States. However, Aduhelm had been mired in controversy since its approval, with scientists questioning the drug’s efficacy. No wonder, shares of Biogen have lost 39% from their yearly peak and currently trade around $258, with the company sporting a market cap of $38 billion.

The company’s multiple sclerosis drug Tecfidera, once a cash cow, lost patent protection in June 2020, and its sales have been on the decline due to generic competition. Tecfidera contributed only $498.6 million to total revenue in the third quarter of 2021 compared to $953 million in the year earlier period.

Spinraza, the company’s spinal muscular atrophy, has also been experiencing a decline in sales due to competition from rival drugs of Roche and Novartis. The drug’s revenue declined to $444 million in the third quarter of 2021 from $494 million in the year-earlier quarter.

The newly launched Alzheimer’s drug Aduhelm was able to generate a measly revenue of only $0.3 million for the third quarter of 2021 while the peak annual sales forecast is about $9 billion.

Biogen and Samsung Biologics have a joint venture by the name Samsung Bioepis Co., Ltd. that was formed in December 2011 to develop, manufacture and market biosimilars.

Given the declining sales and disappointing uptake of Aduhelm, will Biogen take these challenges head on with a refurbishment of its pipeline or will it opt for a takeover? Only time will tell.