This year’s Baseball Hall of Fame inductions could prove more than sufficient to stifle the contention of critics that the designated hitter is only half a player.

For the first time, two men who depended on the DH for their niche in baseball history will be enshrined at the same time.

Edgar Martinez, a two-time batting champion who spent his entire career with the Seattle Mariners, will join Harold Baines in the six-man Class of 2019. Martinez, Mike Mussina, Roy Halladay and Mariano Rivera were elected by the Baseball Writers’ Association of America, Baines and Smith by the Today’s Game Era Committee.

Martinez and Baines follow in the footsteps of Frank Thomas, the first Hall of Famer who played the majority of his games as a DH, and Paul Molitor. 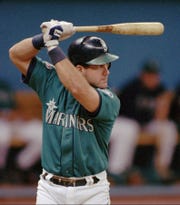 Since that time, a long line of future Hall of Famers used the DH to extend their careers. Among them were Hank Aaron, George Brett, Orlando Cepeda, Harmon Killebrew, Reggie Jackson, Eddie Murray, Jim Rice, Billy Williams and Dave Winfield, in addition to Baines, Molitor and Thomas.

“I became a full-time DH because I wanted to,” Thomas says. “The White Sox didn’t have another position for Paul Konerko and I wanted him to get on the field.”

“To be honest, it’s the toughest role on the field – especially when you’re hitting in the middle of the lineup,” Vaughn says. “I just thought I was a better player when I was on the field.

“I’m happy to see Harold Baines and Edgar Martinez elected, but it takes a special kind of person, someone so in tune with his hitting he can sit down after making an out and come back and get it going again. I hated the DH. I couldn’t sit still that long.”

Baines has a different perspective.

“The first thing you’ve got to realize is what you can do to help your team,” Baines told writers at the Baseball Winter Meetings in Las Vegas after his election last December. “Physically, I knew I couldn’t play defense on a regular basis in the outfield anymore so I concentrated on my hitting skills. I did more studying about the pitchers and how they were trying to get me out.

“You can always learn by watching the game itself. Even though I wasn’t in the field, I was trying to pick up pointers from the pitchers and catchers. I learned a lot that way: some pitchers tilt their gloves a certain way, some catchers try to get a call on certain pitches.”

Baines just missed reaching 3,000 hits (2,866) but his election was controversial, as many consider his overall numbers unspectacular. He never finished higher than ninth in MVP voting and never reached more that 6.1% on BBWAA Hall of Fame voting. 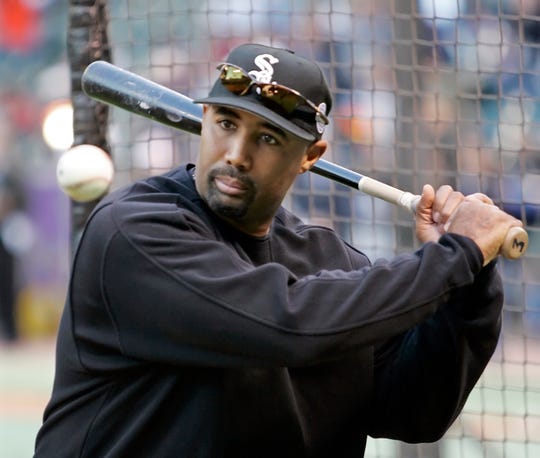 “Everything I heard or read said the DH is really not part of the game,” he said. “I disagree. I know I played the game the right way. Maybe this election will open up the door for more designated hitters.”

Although Baines, who last played in the majors in 2001, took a circuitous route to Cooperstown, the next DH designated for certain election will be David Ortiz, eligible for the first time in 2022. The longtime anchor of the Boston Red Sox batting order holds many DH hitting records.

HALL OF FAME: Finally closers get their due in Cooperstown

HOF: Is bar for starting pitchers coming down?

Martinez, like Baines, had his number (11) retired by his team after spending all 18 seasons of his career with the Seattle Mariners. In fact, he might have helped save baseball for the city.

In the final game of the best-of-five 1995 American League Division Series, played at the old Kingdome, Martinez laced a double that defeated the Yankees and gave the M’s their first series win in postseason play. But the Mariners remain the only current American League club that has never reached the World Series.

A two-time batting champion and seven-time All-Star, Martinez still had to wait 10 years to garner the 75% of the vote required for Cooperstown enshrinement. Now that the voters have chosen a pair of designated hitters, it should be easier for other DH types.

“The fact that Harold and I got in this year is going to help the DH for years to come,” Martinez says. “It will definitely make a difference.”

Originally, Martinez hated the idea of giving up third base.

“I didn’t want to be a DH,” he says. “I felt I could be put into a situation where if I didn’t have a good year, my career could be shortened. At the same time, I looked at the reasons I was given that choice. I had injuries to my knees, hamstrings and shoulder. When Lou Piniella told me, ‘I need you in the lineup,’ I couldn’t fight against that. He was right, and I’m glad I did it.”

Martinez did it so well that Major League Baseball changed the name of its annual DH award to the Edgar Martinez Outstanding Designated Hitter Award. He won it himself five times, retiring after the 2004 season as the Seattle club leader in runs, doubles, walks, RBI, extra-base hits and total bases.

His batting average against fellow 2019 inductee Mariano Rivera, the lifetime leader in saves, was an amazing .579.

“The fact that I’m going in with Mariano means a lot. He was the top reliever in the game and a great person, too. The fact he got 100% of the vote makes it special for me to go in the same year.”

Like Rivera, a rare ability to relax was also the key to success for Martinez.

“I learned to manage the pressure and handle difficult situations,” he says. “I focused on the task rather than on what I wanted to happen.

“It takes a lot of work. As a DH, you have so much more time to think when you’re not doing well. If you don’t play in the field, you don’t have other ways to help your team. You have to work on your hitting even more to make sure you’re consistent.”

Until 2014, however, Molitor and Rice were the only inductees to play even a quarter of the time as designated hitters. Proving that the job was not just an old-age home for injured sluggers, Molitor was the first DH to win a World Series MVP trophy (1993) and Hideki Matsui won a World Series MVP without ever playing in the field (2009).

Ortiz was serving as the Red Sox DH when he won MVP honors in both the American League Championship Series of 2004 and the World Series of 2013.

There is growing sentiment in baseball circles that both leagues should play by the same rules, especially in this age of interleague play.

In Cooperstown, at least, the designated hitter has already gained wide acceptance.

The coronavirus stimulus talks stall out, plus Samsung, Google, and Apple's war for smartphone buyers: CNBC After Hours

Mark Zuckerberg Gets Even Richer, Joins The Ranks Of The ‘Centibillionaires’