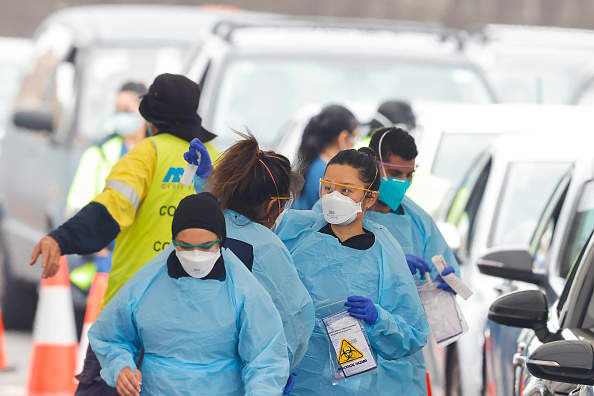 Australia recorded another surge in Covid-19 infections on Tuesday as an outbreak of the highly infectious omicron variant disrupted a staged reopening of the economy, while state leaders argued over domestic border controls.

The three most populous states, New South Wales (NSW), Victoria and Queensland, reported just under 10,000 new cases between them the previous day, putting the country on course to eclipse the previous day's record total of 10,186 cases.

There were five Covid-19 deaths reported, although the authorities did not specify whether any were related to the omicron variant.

The country's five other states and territories, which have also been experiencing flareups of the virus, were yet to report figures.

The omicron variant, which medical experts say is more transmissible but less virulent than previous strains, began to spread in Australia just as the country got underway with its plan to reopen after nearly two years of stop-start lockdowns.

With the resumption of rising case numbers — despite a vaccination rate of more than 90% for Australians aged over 16 — the country's state leaders have brought back some containment measures like mandatory mask-wearing and QR code check-ins at public venues.

But the rising case numbers have led to mandatory self-isolation for thousands of workers in the hospitality, entertainment and airline sectors — the sectors worst hit by lockdowns — resulting in cancelled theatre shows, closed restaurants and postponed flights.

The new outbreak has also fueled a resumption of fractious domestic politics which defined much of the pandemic as some states resist calls to remove internal border controls.

NSW, home to Sydney and a third of Australia's 25 million population, called on neighboring Queensland to shift from mandatory clinical testing to on-the-spot rapid antigen testing for people travelling to the tourist-popular state following complaints of hours-long wait times.

In one case, a Sydney testing clinic sent incorrect negative test results to some 1,400 people. Hazzard said the bungle was the result of "human error, and when people are under pressure, human errors are more frequent."

Queensland has promised to review its border testing rules from Jan. 1, but Hazzard urged Queensland to drop the rule immediately.

Queensland Health Minister Yvette D'Ath did not respond to Hazzard's comments about border testing at a news conference, but said the state would remove another testing rule for interstate arrivals: people arriving in the state would no longer have to take a virus test five days after arriving.

Australia's international border remains effective closed, but Australian nationals may return without mandatory hotel quarantine and the country has said it would allow certain skilled workers and foreign students in.