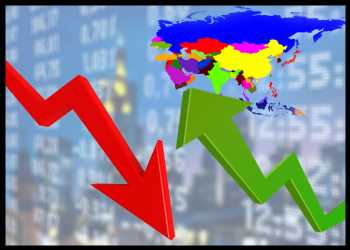 Asian stock markets are trading mixed on Friday, following the mixed cues overnight from Wall Street, as traders reacted to upbeat earnings news, labor data and home sales data from the U.S., with the sinking crude oil prices dragging the markets. Traders remain concerned about the coronavirus situation in the region, which is hindering economic activity. Asian markets ended mixed on Thursday.

The Australian stock market is edging up in choppy trade on Friday, recouping the slight losses in the previous session, with the benchmark S&P/ASX 200 staying above the 7,400 level, following the mixed cues overnight from Wall Street, led by strength in technology stocks, partially offset by weakness in energy and mining stocks.

Traders are also cautious as the country is set to gradually reopen its borders after lifting lockdown restrictions in Melbourne, even as Victoria reported 2,189 new locally acquired cases and sixteen deaths on Thursday. NSW has reported 345 new local cases of COVID-19 and five deaths.

Among major miners, BHP Group and Rio Tinto are losing more than 2 percent each, while Mineral Resources is declining almost 3 percent, Fortescue Metals is down almost 2 percent and OZ Minerals is lower by more than 1 percent.

Oil stocks are mostly lower after crude oil prices tumbled overnight. Woodside Petroleum and Oil Search are losing more than 1 percent each, while Beach energy and Santos are declining almost 2 percent each. Origin Energy is edging down 0.2 percent.

Among tech stocks, Xero and WiseTech Global are gaining more than 1 percent each, while Appen is adding almost 2 percent. Afterpay is edging down 0.2 percent.

Among the big four banks, Commonwealth Bank, ANZ Banking, National Australia Bank and Westpac are all edging down about 0.3 percent each.

Shares in Lynas are declining more than 7 percent after the rare earths group reported a significant drop in quarterly sales revenue and production from the June quarter due to COVID issues.

Shares in Aurizon are losing almost 5 percent after it told investors it agreed to buy the One Rail Australia business in a $2.35 billion deal from Macquarie Asset Management and intends to divest the east coast part of the business in the future.

In economic news, the manufacturing sector in Australia continued to expand in October, and at a faster pace, the latest survey from Markit Economics showed on Friday with a manufacturing PMI score of 57.3. That’s up from 56.8 in September, and it moves further above the boom-or-bust line of 50 that separates expansion from contraction. The survey also showed that the services PMI climbed to 52.0 in October from 45.5 in September, while the composite rose to 52.2 from 46.0 a month earlier.

In the currency market, the Aussie dollar is trading at $0.747 on Friday.

The Japanese stock market is trading notably higher on Friday after briefly being in the red in early trades, recouping some of the sharp losses in the previous session, with the benchmark Nikkei 225 just above the 28,900 level, following the mixed cues overnight from Wall Street, as traders reacted to upbeat manufacturing and services PMI data.

Traders are also upbeat after a sharp drop in coronavirus infection rates has led to the gradual reopening of the nation’s economy with Tokyo and Osaka lifting curfews.

In the tech space, Advantest is gaining almost 2 percent, Tokyo Electron is adding more than 4 percent and Screen Holdings are up almost 5 percent.

In the banking sector, Mitsubishi UFJ Financial and Sumitomo Mitsui Financial are edging up 0.4 percent each, while Mizuho Financial is losing more than 1 percent.

Among major exporters, Panasonic is edging up 0.4 percent and Sony is gaining almost 1 percent, while Canon and Mitsubishi Electric are flat.

Among the other major gainers, Nikon is gaining more than 4 percent and Toto is adding more than 3 percent, while Sumco and Komatsu are up almost 3 percent each.

Conversely, Toho Zinc is losing more than 6 percent, Z Holdings is down 4.5 percent, CyberAgent is declining more than 3 percent and Mitsui Mining & Smelting is lower by almost 3 percent.

In economic news, the manufacturing sector in Japan continued to expand in October, and at a faster pace, the latest survey from Jibun Bank showed on Friday with a manufacturing PMI score of 53.0. That’s up from 51.5 in September, and it moves further above the boom-or-bust line of 50 that separates expansion from contraction. The survey also showed that the services PMI climbed to 50.7 in October from 47.4 in September, while the composite also rose to 50.7 from 47.9 a month earlier.

Further, overall inflation in Japan was up 0.2 percent on year in September, the Ministry of Internal Affairs and Communication said on Friday. That exceeded expectations for an increase of 0.1 percent following the 0.4 percent drop in August. Core CPI, which excludes volatile food prices, were up 0.1 percent on year – matching expectations following the flat reading in the previous month. On a seasonally adjusted monthly basis, overall inflation was up 0.4 percent and core CPI rose 0.1 percent.

In the currency market, the U.S. dollar is trading in the 114 yen-range on Friday.

On Wall Street, stocks moved mostly higher over the course of the trading day on Thursday, extending the upward trend seen over the past several sessions. The S&P 500 moved higher for the seventh straight session, reaching a new record closing high.

Meanwhile, the major European markets all moved to the downside on the day. While the U.K.’s FTSE 100 Index slid by 0.5 percent, the French CAC 40 Index and the German DAX Index both fell by 0.3 percent.

Crude oil prices tumbled on Thursday, weighed down by a forecast that U.S. weather this winter will likely be warmer than average. Profit taking after recent strong gains and lower coal and natural gas prices also contributed to oil’s decrease. West Texas Intermediate Crude oil futures for December ended down by $0.92 or 1.1 percent at $82.50 a barrel.