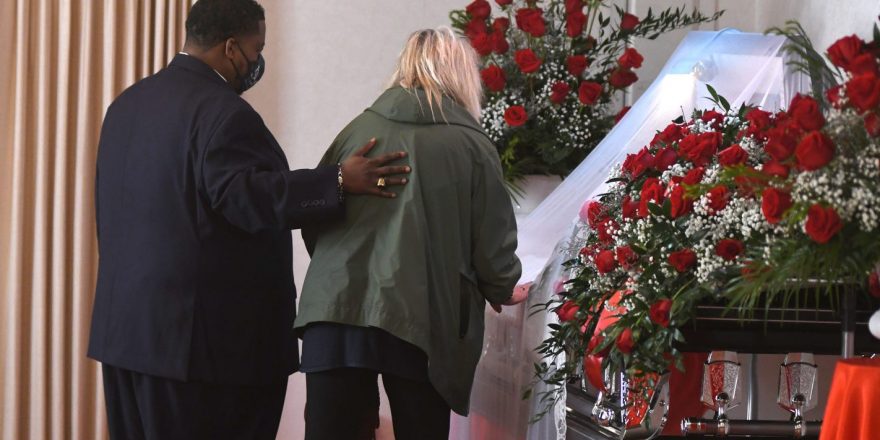 HERTFORD, N.C. – Loved ones of Andrew Brown Jr. were paying last respects at a public viewing Sunday for the man whose fatal shooting by sheriff’s deputies in nearby Elizabeth City drew claims of “execution” and drew a national spotlight to these quiet eastern North Carolina communities.

Brown was shot five times, including once in the back of the head, when Pasquotank County deputies tried to serve drug-related search and arrest warrants at his home April 21.

Sunday’s viewing drew scores of people to Horton’s Funeral Home, where upbeat gospel music played on a small retro CD player while a slideshow of Brown greeted people as they walked in. A guest registry was available for people to sign.

Brown’s casket was open from the waist up and a thin veil covered his face. Slower, more somber music played in the background near his casket. Another slideshow played above his feet.

Brown’s death ignited protests and a court battle over release of body camera footage of the shooting. After days of legal wrangling, some family members and lawyer Chantel Cherry-Lassiter were permitted to watch about 20 seconds of redacted video. They claim Brown was executed and demand access to more of the video.

“My dad got executed just by trying to save his own life,” said Khalil Ferebee, who viewed the clip and is one of Brown’s seven children. “Those officers were in no harm of him at all.”

Cherry-Lassiter said it showed Brown with his hands on the steering wheel of his car and not a threat to deputies. She says the footage shows the deputies running up to Brown’s car while shooting, and that “he finally decides to try to get away and he backs out, not going toward the officers at all.”

“It is then and only then that you hear shots,” Womble said.

Judge Jeff Foster Brown ruled the family will be allowed to view more footage this week. None has been publicly released yet, despite legal efforts by a coalition of media organizations that includes the USA TODAY Network. Brown said he would reconsider the request to release the tapes in 30-45 days.

Womble said he believes the State Bureau of Investigation will be able to complete its independent inquiry by that time.