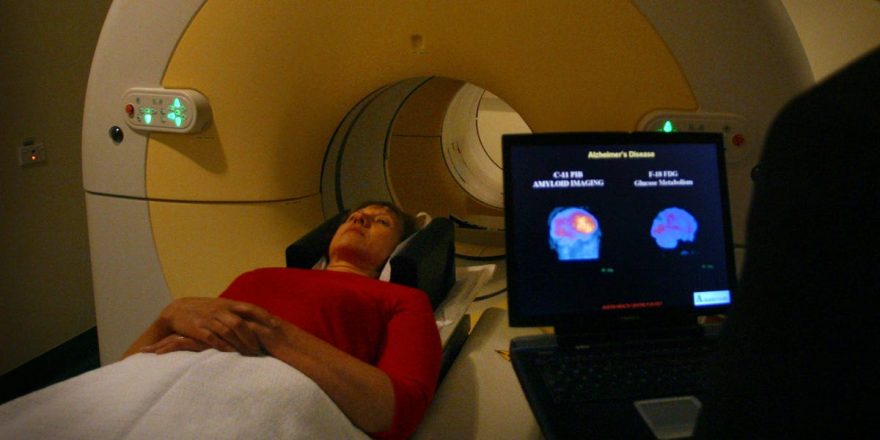 Neurologist Marwan Sabbagh has a list of Alzheimer’s disease patients hoping to get their hands on Biogen’s new drug.

But despite all the preparation, Sabbagh is expecting that his phone at the Cleveland Clinic will be ringing off the hook with existing and new patients that need to be reassessed and get the scan needed for a prescription.

The Food and Drug Administration on Monday approved the new treatment, Aduhelm. The drug, made by drugmaker Biogen, is unique in that it’s designed for people who have a sticky plaque in their brains called amyloid beta. The plaque is generally detected through a special imaging test called a positron emission tomography or PET scan.

This is a new way of assessing Alzheimer’s patients. For decades, doctors have diagnosed the neurological condition based on a person’s outward symptoms — the memory loss, confusion, and other cognitive issues characteristic of the disease. Alzheimer’s patients almost never got PET scans up to this point, neurologists told Insider.

A PET scan can show exactly where and how much amyloid has built up. There are some more experimental methods of measuring amyloid in spinal fluid or potentially blood, but neurologists said they’re not ready for mass use.

The drug’s label doesn’t state that patients have to undergo a PET scan — it only mentions the diagnostic test when detailing Biogen’s clinical trial results. But physicians will likely want to confirm a person has amyloid plaques in their brains before prescribing the drug. Half of patients with mild cognitive impairment don’t have signs of the plaque.

“Even if there’s not a clear directive from the label, it would be irresponsible to give Aduhelm to patients who don’t have amyloid,” said Sabbagh, who has consulted for Biogen. “There will be a large population of patients that will need to have biological confirmation of the disease. People are going to scramble,” he added.

Aduhelm will require visits to infusion centers, MRI scans to monitor for adverse effects and much more. But the diagnostic PET scans, in particular, could be a big out-of-pocket cost for patients because they’re largely not covered by Medicare, the federal insurance plan for people over the age of 65.

The lack of coverage could block many eligible patients from getting the drug.

“The out of pocket expense for this drug is actually going to make it very difficult for the average patient to access this,” Cigna’s Chief Clinical Officer Steve Miller said during a September 2020 University of Southern California panel.

Medicare will lead the pack in deciding how Aduhelm is prescribed

Medicare covers anywhere more than 5 million of the estimated 6 million Americans with Alzheimer’s. So whether or not patients will have access to aducanumab could hinge heavily on what Medicare decides in the next couple of months.

While the FDA is charged with ensuring medical products are safe and effective, the Centers for Medicare and Medicaid Services will mull whether the drug is reasonable and necessary for treating elderly people. CMS could decide to cover the drug with more restrictive requirements than the FDA label.

Representatives from CMS did not respond to a request for comment. 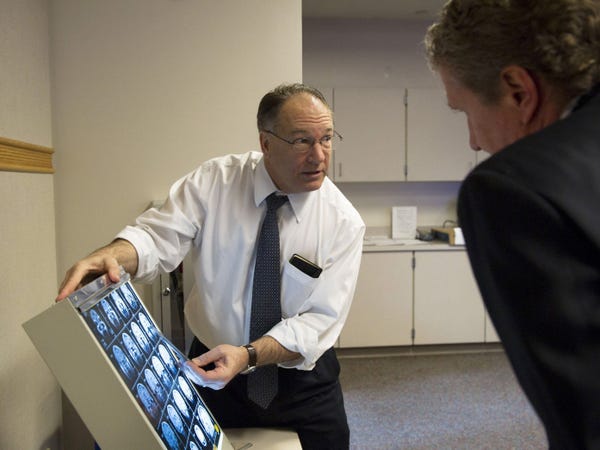 Health insurers like Humana are looking to CMS for guidance.

“As we develop our coverage policy at Humana, we will look to the Centers for Medicare and Medicaid Services (CMS) for guidance to ensure that there is consistent access to this therapy in the Medicare program for patients and their families,” a Humana spokesperson said in a statement on Monday.

Sharon Jhawar, the chief pharmacy officer at California Medicare Advantage insurer SCAN Health Plan, said that because the drug must be given as an infusion, it’s likely to be covered under Medicare Part B, which covers medical services and some drugs, as opposed to Part D, which is prescription drug coverage offered by private Advantage plans.

Medicare Advantage plans must cover all Part B drugs. So, SCAN would cover it according to Medicare’s coverage guidelines, Jhawar said.

Still, if Medicare puts out rules that are vague, Medicare Advantage plans may have more discretion to make their own determinations, said Desiree Otenti, senior director of medical policy and program implementation at Blue Cross Blue Shield of Massachusetts.

Commercial health insurers also make their own decisions on whether or not to cover drugs. Otenti said it would take Blue Cross anywhere from one to four months after FDA approval to analyze the data and develop a coverage policy. In the interim, the plan would review patients on a case-by-case basis.

Medicare is already used to covering visits to infusion centers, thanks to chemotherapy and other drugs given through an IV. The Alzheimer’s Association has worked with CMS to show that PET scans are useful tools. But at this point, Medicare’s 2013 policy to limit coverage for PET scans to specialized research or to rule out an Alzheimer’s diagnosis. 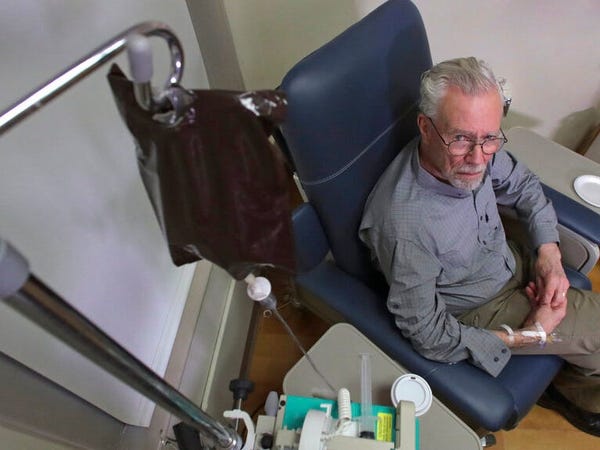 Medicare policies do change over time, particularly if a new treatment or medical device is approved by the FDA, according to Casey Schwarz, senior counsel at the Medicare Rights Center.

But in the meantime, patients trying to get coverage for the drug could be forced into an appeals process.

Even with Medicare coverage, traditional Medicare enrollees typically must pay 20% of the cost of drugs, which could be an obstacle to getting treatment.

Most traditional Medicare enrollees buy supplemental insurance to help shoulder that cost. But 5.6 million enrollees, or about one in 10, had no supplemental coverage in 2018, according to the Kaiser Family Foundation.

Robert Egge, the chief public policy officer at the Alzheimer’s Association, places the current figure closer to one in every five Medicare enrollees.

That’s a big issue when half of all Medicare beneficiaries are living on less than $29,650 each year.

Moreover, about 27% of traditional Medicare enrollees were under-insured in 2018, meaning they had annual out-of-pocket costs that were 10% or more of income, or 5% or more of income if they made less than 200% of the federal poverty level, according to the Commonwealth Fund.

For traditional Medicare members, there’s no cap on how much they could end up paying out of pocket each year. Advantage plans cap those costs at $7,550. 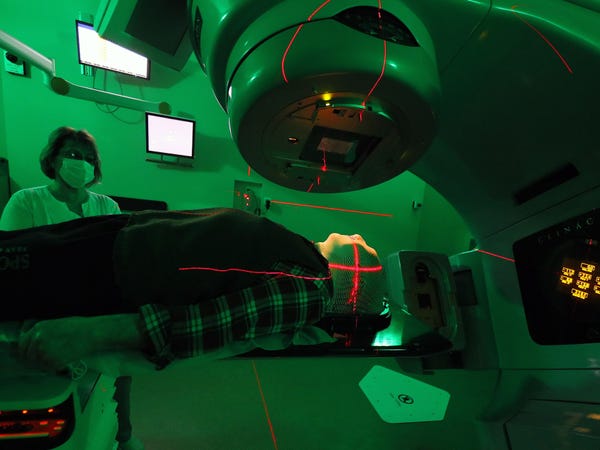 The sudden need for PET scans will flood the healthcare system, neurologists say

University of California, San Diego professor and neurologist James Brewer wasn’t fully in favor of CMS covering PET scans, back when the government was setting its policy in 2013. At the time, physicians and patients couldn’t do much with the results.

A drug like Aduhelm flips his whole argument upside down. But the healthcare system isn’t ready for an influx of patients demanding PET scans, he said.

Biogen executives said during an April analyst call that 600 sites in the US are at the ready to treat patients. But neurologists like Brewer and Sabbagh have said there aren’t many sites prepared for the first step for giving out aducanumab: formally diagnosing a patient and measuring their amyloid levels.

First off, many healthcare facilities don’t have enough supplies of the compound used during PET scans to highlight where amyloid plaques are present, called flobetapir, Brewer said.

These scans are also challenging to interpret, even for the most highly trained specialists, Brewer said. He pointed to data included with the florbetapir FDA label, which showed that technicians were sometimes divided 50-50 on the results of a scan.

“You see how poorly trained experts do at reading amyloid scans. How are you going to do this in North Platte, Nebraska? You might even have trouble doing it in Lincoln, Nebraska,” he said. “It’s going to be a flood to our system. It’s going to be majorly impactful.”